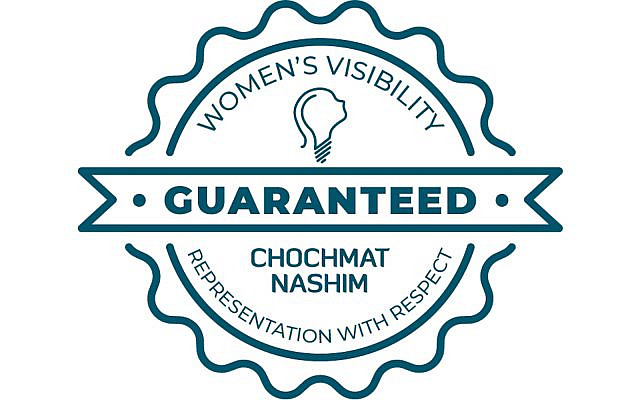 You have been with me – us, Chochmat Nashim (the organization I co-founded to push back extremism) – as we followed, documented, and lamented the phenomenon of erasing women.

Together, we have been shocked by the myriad examples and creative ways women and girls have been erased and replaced, objectified with images of flowers, dolls, chairs, little boys 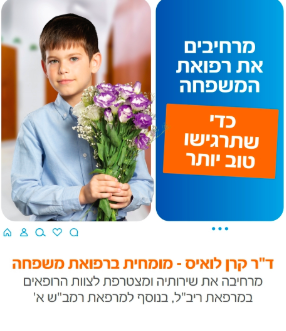 Poster for a female doctor with an image of a boy and flowers. 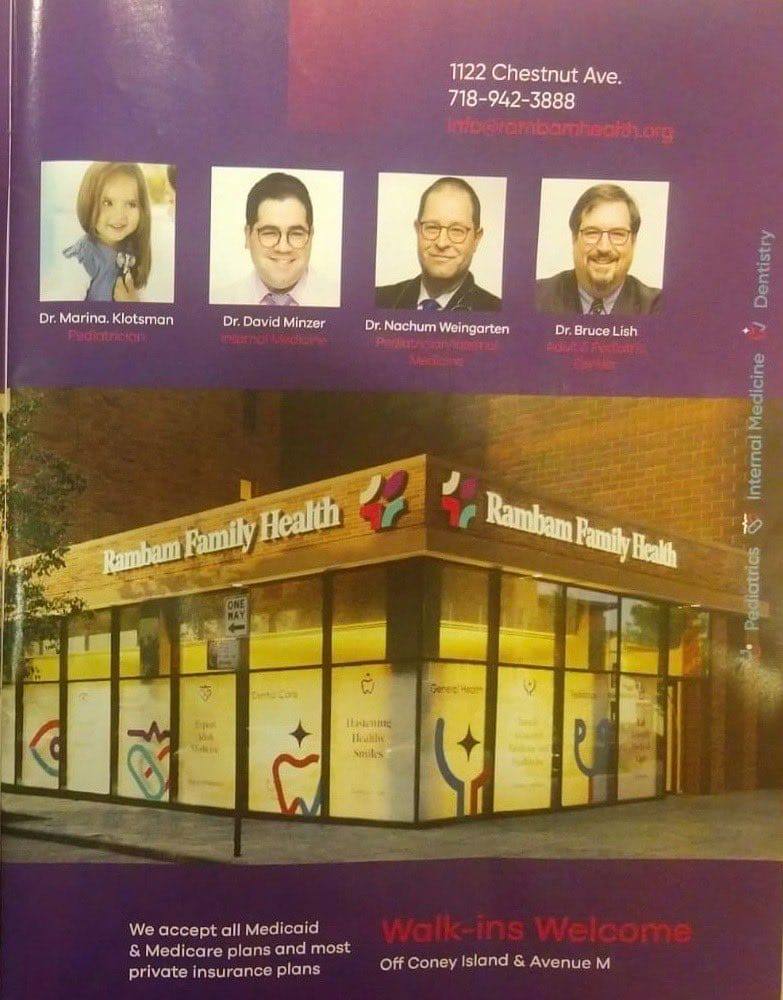 Dr Marina Klotsman is replaced with the image of a little girl. 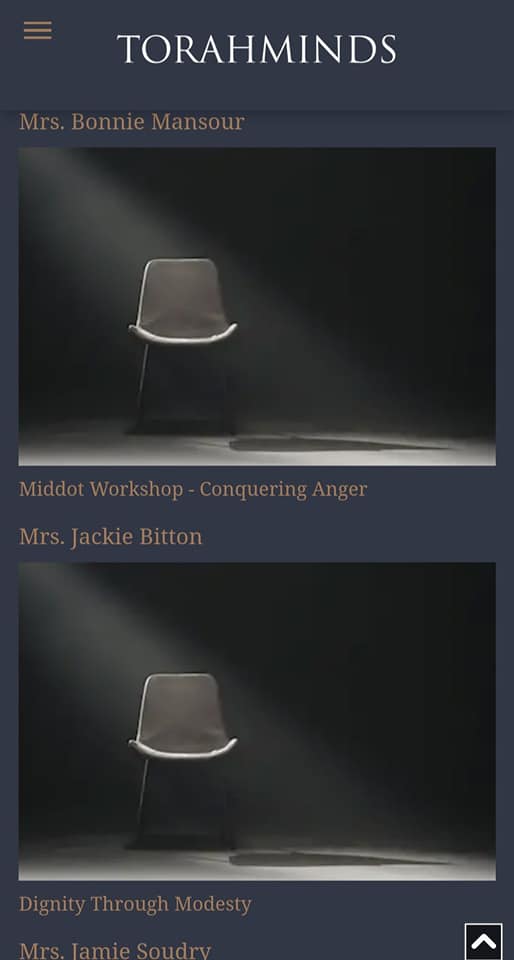 An ad for childrens clothing with human boys and dolls in place of girls. 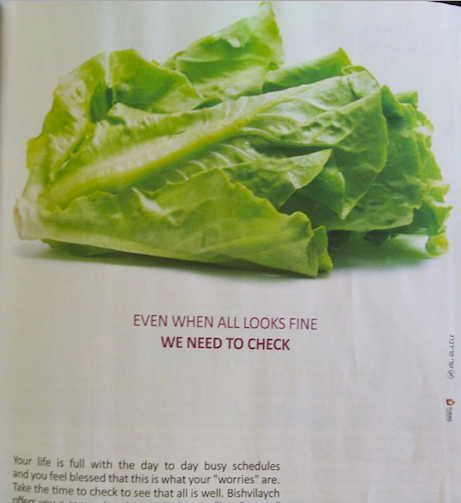 An ad for women’s health comparing breast examinations with checking lettuce for bugs.

Every time we thought we had seen the worst possible erasure, even more egregious examples came along.

We asked over and again, what we could do to end the erasure of women because the simple truth is that when women are not seen, their voices are not heard and their needs are not met.

An with two smiling faces of real estate agents with their names… and one name only.

Financially: When women cannot advertise on par with their male peers, they are at a significant disadvantage. Studies show that smiling faces improve response and builds trust and familiarity in the viewer.

Health: When women’s bodies are considered taboo and their health is not discussed, signs of disease are not understood and women die.

Representation and Rights: When women are not allowed to represent themselves or their community, in print or on a communal committee, women’s needs go unaddressed in religious and political institutions.

When we erase women, we erase their humanity and remove balance from our community.

When we erase women, women are reduced to their bodies — and men are trained to see them as such.

But, despite years of advocacy (ours and that of many others), going to the publications, begging the establishment, asking to be heard… the issue was not taken seriously by those who could and should have helped.

Eventually, we came to realize that if we wanted something done, we’d have to do it ourselves.

We needed a way for the thousands of people across the Jewish world who want a healthy, normal community, to advocate for it.

We needed to create a counter market force that stood up against the erasure of women.

But how to create such a force? How to recognize the places that do not erase women? And how to let people know about them?

People often look for symbols when they shop; whether kosher stamps, warnings of high sugar or sodium, or cruelty-free guarantees. We buy the products that align with our beliefs and help us live the life we want to lead.

And so, I am very, very pleased to present Chochmat Nashim’s Seal of Respect. 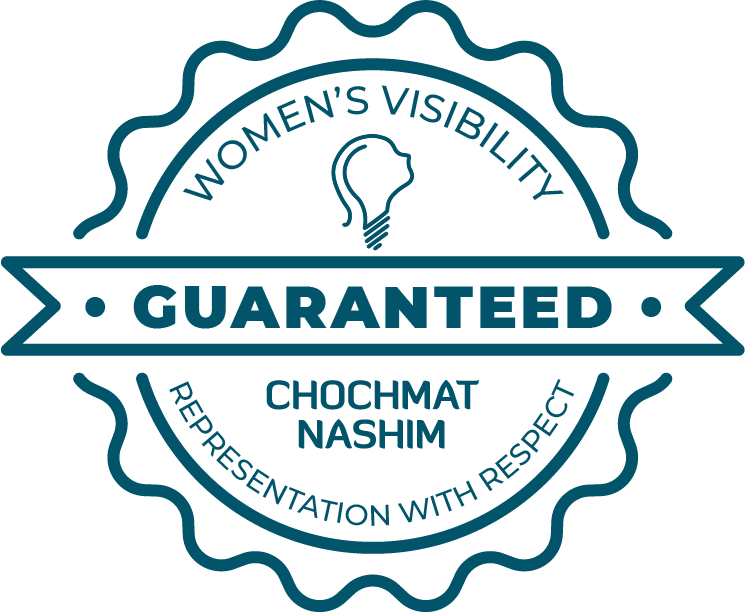 Bearers of this seal declare that they will represent women with respect and not take part in the erasure of women.

It signals that the publication/business/institution respectfully represents women. It is a positive way to show the importance of the issue and enable consumers to put their money where their values are.

We can use this symbol to let us know which businesses support a healthy community, which publications represent our worldview and which charities build the type of world we want to live in — one where Jewish women and girls are shown as an integral part of the community.

Chochmat Nashim will list all publications, businesses and organizations that earn our seal on our website and on our social media. Already, businesses across the Jewish world are signing up.

Together, instead of lamenting reality, we can build our future.

Together, we can be the change we’ve been wanting to see.

Together, we can demand respectful representation of women and ask for the return of headshots and images of female panelists, speakers, teachers, businesswomen, and the average Jewish woman and girl.

Together, we can work towards:

And getting back to a normal healthy community where women are valued for their minds and contributions instead of being sexualized by being erased.

If we want a healthy Jewish community, now and for our children, it is up to us to get it done.

Add your voice. Get the seal to your favorite business and institutions that don’t erase women and place this post on your social networks. Together we can do this. Because a healthy Jewish community is everyone’s business. 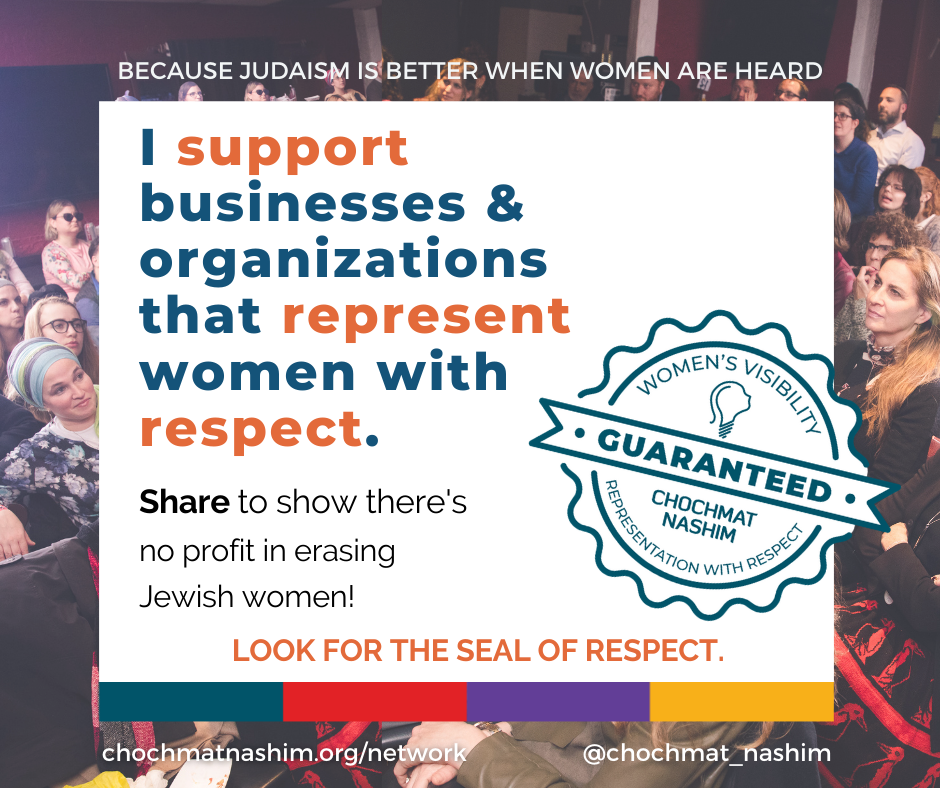 Share this image on your social media and let everyone know you support businesses and institutions that represent women with respect!