If a man cannot look at a woman and say ‘What a healthy and handsome woman the Almighty has created,’ then I do not know what is happening to us. And I fear that if this continues, we will have to veil our faces.

These are not my words (though I’ve said them in these pages before), these are the words of Rabbanit Adina Bar Shalom, daughter of Rav Ovadia Yosef a’h.

Speaking at a conference, she said she was “greatly ashamed” that the Shas publication “Day to Day” ran a photograph of the newly elected government with the faces of female ministers blurred out. 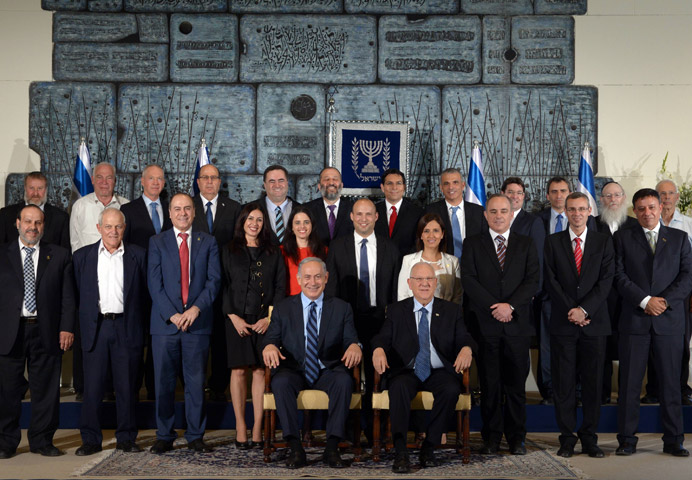 The 34th Government of Israel

She recalled her father reacting with shock and anger after seeing a family photo published with the faces of his wife and mother blurred out.

What nerve — neither of them are alive anymore, what is this supposed to be?…Ultimately, they’ll all be in veils.

It wasn’t just the Shas publication, but other Charedi papers who also censored the three women in the photo. Some chose to blur, others went so far as to actually remove them and to photoshop men closer together to fill the space, as if the women actually did not exist. 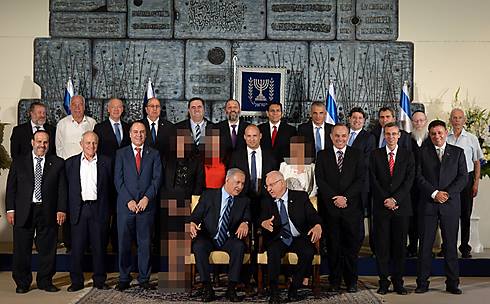 In my right mind, I will not try and guess the various thoughts in the minds of the editors making that choice. To blur, to erase, to mention the women’s last names or to pretend they don’t exist at all — choose your form of falsehood, it is yours to create. 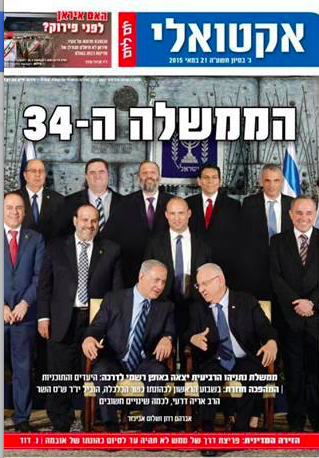 The first is Rebecca using her scarf to cover herself when she is told the man coming towards her is her husband to be. After a long dusty journey, alone aside for servants and probably very nervous, she covers herself temporarily before meeting her husband for the first time. Perhaps in shyness, perhaps preferring to freshen up after her travels, perhaps like a bride being presented to her husband, she chooses to cover herself. (Gen. 24, 65)

The other mention of a veiled woman is Tamar. When Yehuda sees a woman on the side of the road, the Torah states that he thought she was a prostitute because she covered her face. Indeed, that is what Tamar wanted him to think, it was integral to her plan, so she dressed the part and veiled herself. Her veil proclaimed her a harlot. (Gen. 38, 15)

But, why are we speaking of veils? No one is suggesting women wear veils. We are not Muslims!

We are only saying they should not be in books, magazines or newspapers… or telephone books, or wedding invitations or accepting awards…

People like to roll their eyes when a correlation is made between erasing women from images and veils.

But those people are in denial.

If women and girls cannot be seen in normal everyday ads and magazines;

If even cartoons of girls are not allowed, such as in this Lag B’omer safety pamphlet: 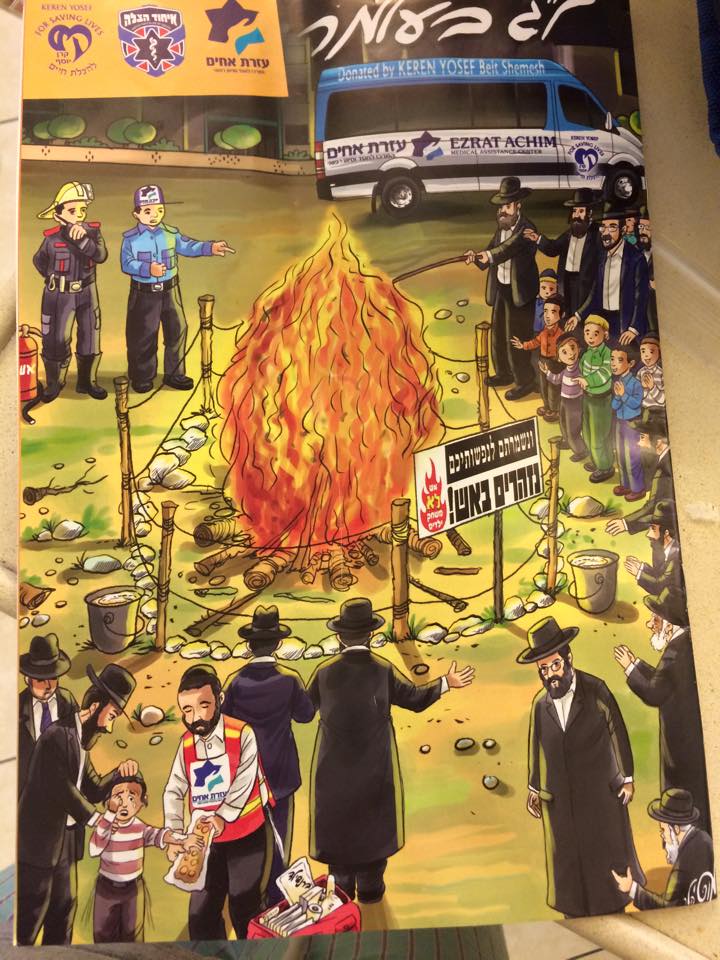 Lag B’Omer safety pamphlet. Two versions were made, with and without girls.

If girls need to be in the back of the bus;

How far are we from this which has already started: 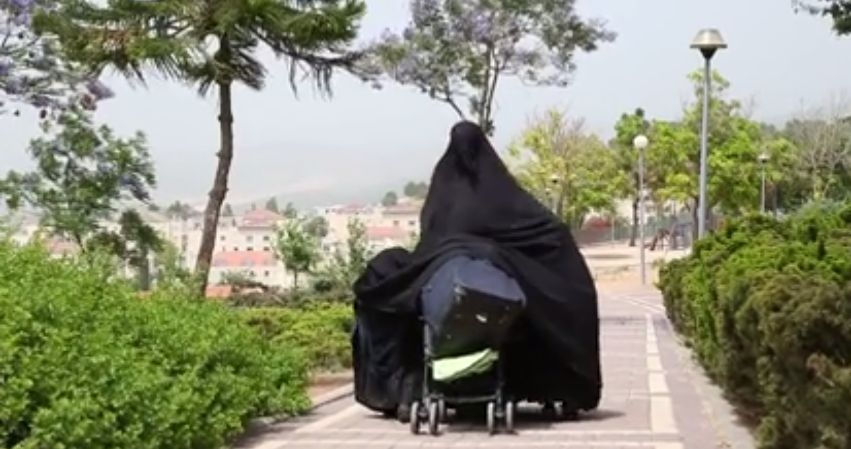 It is a natural slide along this oh so very slippery slope that has been named ‘modesty’. It is what happens when women are told their bodies and faces are vehicles for sin.

Despite being new, it has become the norm to not show women and girls in many publications catering to the religious public.

Women advertise and write articles alongside men, but only the men have their photos. This advertisement was in one of the publications.

The realty office said that it was not their choice, that the paper would not allow the woman’s picture to be printed. From an ad the same company placed in another paper that included the female realtor’s image, it is clear that neither the office nor the realtor herself chose the censorship.

What this paper did is illegal.

There are those who defend this practice, saying that women are holy and do not need to be in pictures, that no one is harmed, and that we should just ‘not look’ if it bothers us so much.

Is it even possible to delineate all of the irony in that statement?

Removing women and girls from magazines, books and newspapers, altering reality to pretend that they are not in the government, creating a reality where a women cannot advertise the same as men, where a woman’s smiling image immediately brings to mind lasciviousness, sex and sin? And no one is harmed?

Israel Irenstein says of growing up in that world:

“When you don’t really know any women, they become objectified. They’re like animals in the zoos. You don’t get to interact with any of them. The simplest acts such as accepting change from a female cashier, were…immediately sexualized. It becomes very hard to sit in front of a woman. Even if she’s fully dressed.”

Many people are fully aware that this is a new phenomenon, that books and magazines have always featured modestly dressed women. They are happy to label this as ‘mishegas’ in private but do not stand against it in public.

The fear of being thought of as ‘less frum’ than others paralyzes some.

But we can no longer cater to the lowest common denominator.

It is up to us to say that we will not accept it.

For the sake of our daughters, our sons, ourselves:

Don’t subscribe to or buy magazines that censor women.

Do not advertise in them.

Do not agree to have your name (ladies) without your picture or your picture but not your wife’s (men) in the shul directory.

Do not accept an award where you are not welcome at the award ceremony (ladies) or without the presence of your wife, or female business or research partners (men).

Ask your Rabbanim to come out strongly against this practice — publicly.

Reject the practice of saying that our wives and daughters must be hidden — whether that veil is pixels on a screen or a black sheet in the wind.