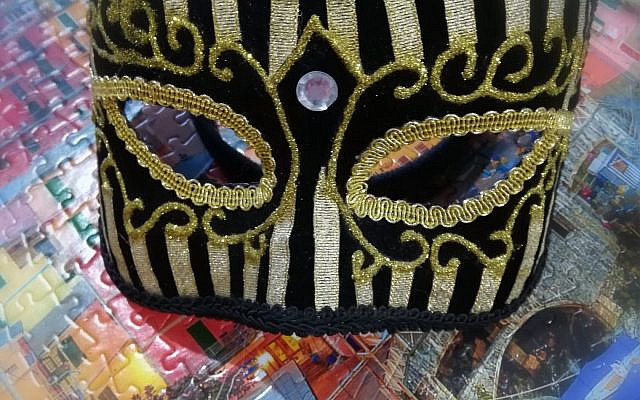 When will costumes and colors cease to define and divide us? (photo credit: Ruti Eastman)

I was driving myself to Towson Mall, and got lost. (Directions were never my strong suit.) I pulled into a gas station, and the young Black attendant bounced out the door with the most radiant smile.

“How can I help you, sister?” he asked, eyes beaming. I was so touched by that handsome, welcoming face, and a bit perplexed. Race relations had not reached the fever pitch they have in recent years; but even in the 1990s, communication between Blacks and Jews in Baltimore was often less than warm and fuzzy.

I explained to the sweet young man that I was lost and asked directions to the mall. He directed me, never losing that warm smile.

I responded with a bit of a theatrical flourish. “Thank you, kind sir!” He laughed sweetly and waved me goodbye. My spirits took a great leap. What a lovely surprise!

The mall was busy, as usual. I passed three more Black youths who all smiled at me and said, “Have a great day, sister!” I smiled back warmly, and wished them a great day, but I was utterly confused. Had I missed something? Was this national Treat a Jew Like Family day?

Finding my destination, I entered the shop to see three Christian clergy-people coming out, a priest and two nuns. And then — as we say in Israel — the asimon dropped. I caught a glimpse of myself in a mirror. My friend Miri had recently created some lovely snoods to match my dresses. Today I was wearing the blue snood with the white band that complemented my conservative navy blue dress… and I looked a bit like a nun.

And now I was equal parts amused and saddened. Those young Black males would ordinarily either have looked through me as if I weren’t there, or would have looked at me with a veiled hostility. (It wasn’t their fault. It was the state of things in most big cities in America. They were just as likely to be unseen or treated with contempt or fear by the local Jewish population.) They certainly would never have greeted me first, and never with such warmth. That is just the way it was in those days.

But when they thought me a nun, their smiles were genuine, boyish, full of acceptance and affection.

How I would love it if we could see past the uniforms and our different skin colors, religions, genders, political affiliations… if we could just see the human being, each individual hungry for validation and appreciation.

Will the day come in my lifetime when the societal norm will be seeing each other as our human sisters and brothers, without preconceptions and prejudices?

I look forward to the day we turn the world as we know it upside-down, and lose all our masks.

About the Author
After serving in the US military, Ruti Eastman (aka Ruti Mizrachi) married her hero, homeschooled four sons, and intermittently worked in the field of education over a span of 30 years. She has worked in radio, has played in several bands, and teaches harmonica and percussion. Ruti and her family made aliyah in 2007. She currently maintains two blogs, one about Israel, called “Ki Yachol Nuchal!” and the other about general topics such as family, childrearing, marriage, and family history, called “Never Ruthless." Ruti Eastman has published two books of essays on the above topics, both available on Amazon.
Related Topics
Related Posts
Comments