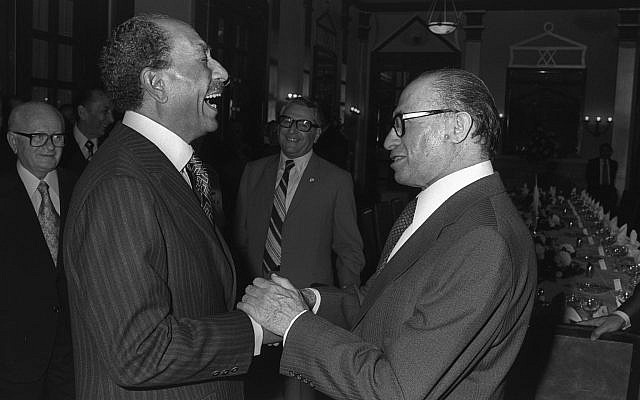 Back in 1979, when Anwar Sadat made his courageous decision to break the history of Arab rejection and isolation of Israel, he was accused of betraying the Arab cause in the region by moving toward a separate peace. His sin: paying attention to what was good for the Egyptian people, rather than holding strong on the issue of the Palestinians. Sadat was not immune to the criticism and sought to push Israeli prime minister Menachem Begin to commit to independence for the Palestinians. Begin would not go there, but he did talk about autonomy for the Palestinians.

More significantly, Sadat never gave in to the pressure from the Arab world. What they called a “separate peace” was to Sadat a smart peace.

All this comes to mind these days as more and more Arab states are initiating their own “separate peaces.” This time around, however, we are mostly hearing accusations against those Arab states normalizing with Israel coming from the Palestinians themselves, rather than from others in the Arab world. A different time, a different reality in the region.

This delinking of normalization from solving the Palestinian problem is probably the greatest challenge, but also opportunity, for the Palestinians in a generation.

How much the Arabs were actually willing to sacrifice on behalf of the Palestinians through the years is a matter for discussion and different opinion. But at least there was surface support, which translated into hostility toward Israel and pushing for international resolutions condemning Israel at the United Nations and elsewhere. Now, however, it is harder and harder for Palestinians to carry the illusion that the Arabs have their backs. Separate peaces are spreading like wildfire.

The question for the Palestinians is how these developments will affect their strategic thinking on how to move forward. They could continue on the same unproductive path of past decades, but now from an even weaker position than they had. Or they can finally take an offensive for peace with Israel more similar to these “separate peaces” than the long history of Palestinian rejectionism.

If the separate peaces were about thinking of the real interests of your people, rather than some abstract ideology about victimization, then a Palestinian separate peace would involve something just as transformative as that which Egypt, Jordan, the United Arab Emirates, Bahrain, Sudan, and Morocco have gone through.

What would a Palestinian separate peace look like? It would focus not on how “evil” Israel is, but on how relations between the two peoples could change, providing more independence, security and well-being for Palestinians than they have ever known. They would take the approach of an Anwar Sadat all those years ago who asked himself what did he have to do to gain some measure of trust from Israel, having conducted a war and hostility toward the Jewish state, and how that element of newfound trust could open the Israelis to new attitudes toward their Egyptian enemy.

So here are a few things the Palestinians should do to create that most significant separate peace of all.

At the same time Israel should take some steps to ease this important process that the Palestinians need to move on. Included in this are a clear rejection of annexation, halting settlement expansion beyond the blocs, and seeking other confidence building measures.

So, you say, this is crazy, Israel is by far the stronger party in this conflict and you’re asking the Palestinians to make all the concessions.

Separate peaces, indeed any peaces, are good. The time has come for Palestinians to seek their own separate peace.