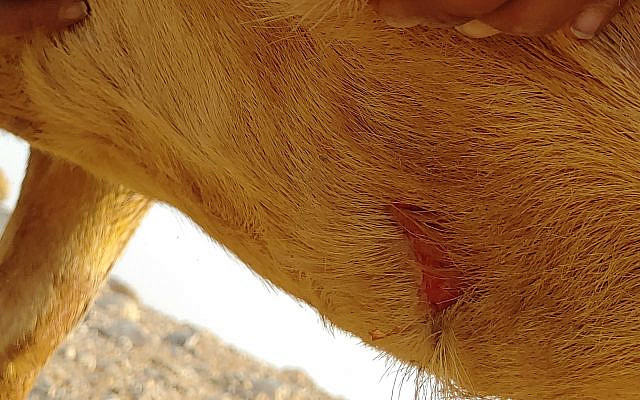 Shavua Tov. On Friday I quoted the weekly Torah portion when a settler all terrain vehicle plowed into a Bedouin flock from Diuk, in the south Jordan Valley.  Two pregnant sheep were injured. 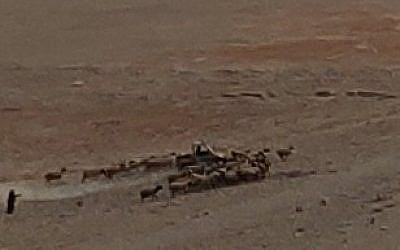 Settler Plowing Through Bedouin Flock in All Terain Vehicle

Shrieking, the Bedouin shepherdesses, their small children and their flocks moved away and up a hill. This allowed the settler flock from Moshe’s outpost, just outside the Mevuot Yerikho settlement, to take over the best of the sparse grazing available at this time of year.  The top of the hill was rather bare. 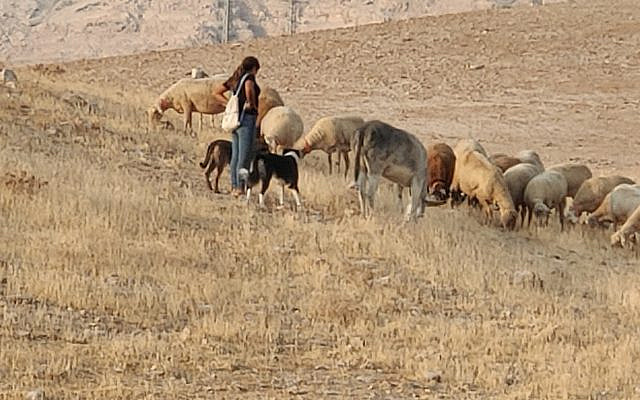 The shepherdesses recognized the atv driver and the settler shepherdess as the children of Moshe. I would almost say that they recognized them because they have been the bane of their lives since arriving less than a year ago. However, that would not necessarily be accurate, because it is so difficult to judge who is the worst among the many settlers that oppress them, and the soldiers who so often do the settlers bidding.

As a fellow activist stayed close to the Bedouin shepherdesses while keeping a wary eye on several settler cars that stopped by her car, I positioned myself between the settler and Bedouin flocks. I hoped to prevent the shepherdess now joined by a settler armed with an automatic weapon, from pushing the Bedouin flocks even further.

They would have to go through me. 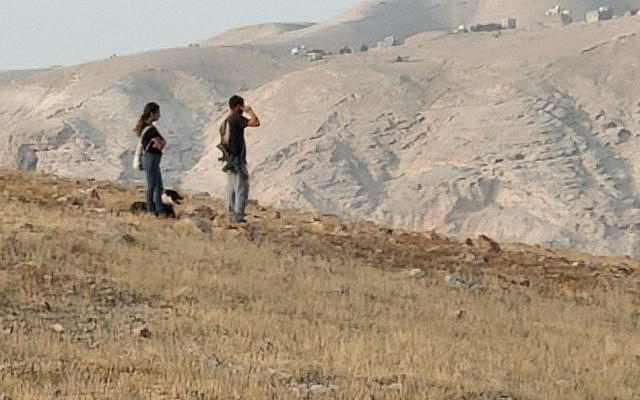 The Bedouin said that the armed settler was again Moshe’s son.  He apparently returned the atv and came back in a car. I couldn’t compare the two oppressors because we had been just arriving when the atv driver injured the sheep. We unfortunately had been too far away to stop him, or to get a good look at his face.

In these situations, I often ask myself what can I say or do to get through to these people?  What might circumcise the thickening around their hearts, and reach their humanity?  How to help them understand that this is not what God wants of them, and that their love of the Land of Israel has become idolatrous? The shepherdesses and their children are created in God’s Image, not the Land. I refuse to give up on people-not these settlers, and not the young man who cursed me on the street Thursday night. I wanted to get through to the soldier that walked up to my car, took my picture and called me a “stinking leftist,” as I waited outside the police station on Wednesday in order to accompany Palestinian landowners filing a complaint about the Ma’aleh Ahuvia settlers who had set up a tent on their land. In each of these cases I tried to engage, and to ask questions:

“Why did you curse me? Is that the way of Torah”

“Because you beat up hilltop youth.”

“I don’t raise my hand against anybody.”

“Take my number and send me the video clip you claim you saw….”

On Friday, I invoked this month of Elul, in which we are supposed to engage in kheshbon nefesh – soul searching and examining our actions as the High Holy Days approach. I asked permission to come closer and show them the pictures of the injured sheep that my fellow activist shared with me. (Stony silence.)

I quoted various traditional Jewish texts. Among them, I reminded them of the famous verse from week’s Torah portion, “Tzedek, tzedek tirdof.” “Justice, justice shall you pursue  (Deuteronomy 16:20).  As I have written in the past, Rabbi David Forman z”l, the founder of Rabbis For Human Rights (my previous organization), loved this verse and the various midrashic commentaries trying to explain why “tzedek” is repeated twice. He particularly liked the idea expressed by Rabeinu Bahya Ben Asher that even when pursuing justice, one must do so using just means. We human rights activist must always remember this. So must settlers. Although I didn’t find it in Rabeinu Bahya’s commentary, the Plaut Torah Commentary inticates that he also said that tzedek is written twice to indicate that we must act justly towards both Jews and non-Jews

Not only must we pursue justice justly, but we must also act justly when we seek to achieve our just desires. Like the settlers, I also feel attachment to the holy Land of Israel. Our desire to live in the Land is just, or at least justified. However, there is injustice and desecration of God’s Name in expressing our attachment through dispossessing and expelling non-Jews from the Land.  This is a quintessential example of what Rabeinu Bayha warns against. In fact, let’s take a look at the full verse, “Justice, justice shall you pursue, so that you will live and inherit the Land that Adonai your God is giving you.”  Pursuing our just desires justly is a condition for living in the Land of Israel.

After entering the police station earlier this week, an officer asked me what the problem was with the settler tent on private Palestinian land.  “Aren’t we commanded to settle the Land of Israel?” He acknowledged I had a point when I reminded him that “gezel goy,” the prohibition of stealing from non-Jews, even in the Land of Israel, is an important halakhic principle.  Settling the land of Israel through dispossession and expulsion is pursing a just goal through just means.

I asked the settlers, “Even if you incredibly believe it is just to dispossess and expel in the name of God and the Land of Israel, do you really think you needed to do it by running an atv through a flock and injuring sheep?” “You are obviously committed to nature and to caring for animals.  Is there a difference between your sheep and theirs?” Maybe if they didn’t have any compunctions about harming fellow human beings, they would have some drop of compassion for their animals.

The rest of the time passed uneventfully, other than a few more passes of settler cars next to our car. At one point a car also approached a Bedouin shepherd grazing his flock further away. The shepherd requested that we not leave until he was safely home. He didn’t need to ask. Unless there are extenuating circumstances, we don’t leave until everybody is home safely. Many of the attacks take place on the way home.

Did anything today penetrate the thickening encasing these settler’s hearts?  Did they think about anything I said around their Shabbat table that evening, or when hearing the Torah read the next day? Sometimes we hear back from soldiers that they spoke among themselves about what we said when back in the barracks.  These two misguided young people doing evil are also created in God’s Image, if we could only help them get in touch with that part of themselves.

Inspired by this past Shabbat in the month of Elul, may we all become pursuers of justice, and remember that whatever we most passionately believe in or desire must be achieved justly.