Last Thursday, June 24, 2021, I was publicly humiliated and scapegoated at a rally organized by the UMASS Boston Chapter of Students for Justice in Palestine, (SJP). More to the point, I was shoved, spit at, called a bitch, a Nazi, a pig, and doused with water at a rally organized by a student organization supported with funds collected and distributed by the Commonwealth of Massachusetts. SJP has been organizing rallies like this on college campuses throughout the U.S. for years, but now, SJP is moving off campus, with the powers that be taking little notice.

The ordeal was the longest seven minutes of my life, but I have nothing to complain about. Jews throughout the world have been subject to much worse abuse at the hands of their fellow citizens in episodes that lasted a lot longer than what I endured.

And even during the most frightening moments of my ordeal, I was comforted by two people who stood up for me out of principle, telling the mob assailing me I had done nothing wrong and that I should be left alone. Very rarely have Jews enjoyed such solidarity from their fellow citizens, even in the most enlightened polities.

Throughout history, people have been voyeuristic bystanders to anti-Jewish violence. These days, people who engage in antisemitic attacks are egged on, sometimes implicitly, sometimes explicitly, by people who declare they are on the side of peace and justice.

I am not a Jew, but what happened to me last week on the streets of Boston, my home for the past 20-plus years, is part of an ongoing campaign designed to drive Jews out of civic life in the U.S. This is not about Israel, but Jews. And it’s not just about Jews, but about undermining the rule of law and poisoning inter-group relations throughout the country — using public funds. It’s a recipe for disaster and the people who run the city are asleep at the switch.

On June 17, the UMASS Boston chapter of Students for Justice in Palestine started promoting a rally that begins on the steps of the Massachusetts State House in Boston and then proceeds to the separate offices of the Anti-Defamation League (ADL) and the Jewish Community Relations Council (JCRC) of Boston.

According to SJP’s narrative, the ADL brings American police officers to Israel, where they are trained to oppress and murder people of color in America, and the JCRC brings Massachusetts lawmakers to Israel to brainwash them into supporting Zionism, which is a form of white supremacy.  They call this “investing in the infrastructure of white supremacism.” It’s an age-old tactic — blame the Jews for the great evil of the day.

With these accusations, which are the poisonous fruit of critical race theory, the rally organizers cast the ADL and the JCRC as the public face of what Bernard Harrison describes in his book Blaming the Jews: Politics and Delusion (Indiana University Press, 2020) as an “evil, conspiratorial organization of an essentially impenetrable kind [with] vast power to harm any non-Jewish society that harbors Jews.”

The SJP narrative, which clearly falls into what Harrison describes as “political antisemitism” had been showcased at a “Day of Rage” that took place on July 1, 2020.

At this rally, Nino Brown, a Boston school teacher associated with the Jericho Project, an organization that promotes a black radical separatist agenda in the U.S., demonized the United States and Israel, shouting, “F—k your police state, America was never great,” and referring to Israel as a “parasitic entity” during his speech.

I wrote a number of articles about Brown’s rhetoric in the weeks after last year’s rally and it was clear that these articles were on the top of his mind during his talk at last Thursday’s demonstration on the steps of the State House. 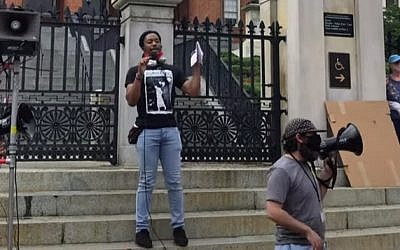 In addition to declaring that Israel was a “cancer to the Middle East” and that July 4 (which he referred to as the “Fourth of You Lie,”) is the “Nakba” for African Americans, he warned of enemies afoot at the rally. These enemies are present, he said, “to report and spread their baseless propaganda.”

That was a clear reference to me and two of my colleagues from the Committee for Accuracy in Middle East Reporting and Analysis (CAMERA) who were at the rally to see what Brown and others had to say. Given that I had written numerous articles about him, I concluded I had an obligation to give Brown an opportunity to complain to me directly — man-to-man — about what I had written, so I introduced myself to him as the rally, which numbered maybe around 100 people, made its way to the ADL offices.

It’s a habit left over from my days as a newspaper reporter at Suburban World Newspapers in Needham, Mass. If you’re going to write about people, you need to be able to stand in their presence as they respond, even with anger.

As the crowd made its way down Beacon Street, Brown and I shook hands, he gave me a flyer and I told him my name. He had declared me an “enemy” just a few moments before, but it was my hope that this human connection would ease the tension between us and that if he had any legitimate complaints about being misquoted, he’d point them out in detail to me either privately or publicly.

My hope was in vain.

When the crowd had made its way to the ADL office, the first speaker, a young woman associated with the SJP chapter of UMASS Boston, leveled a litany of accusations against the ADL. A few minutes into her talk, she paused to listen to one of her fellow activists who spoke to her privately. Then she yelled, “Is Dexter Van Zile in the crowd?”

She asked me how I was — (“Fine,” I said). “It’s nice that you’re with us today. Thank you. It’s an open rally.” The crowd cheered at her magnanimity.

The young woman then went back to her accusations against the ADL, declaring that the organization brings legislators on “brain-washing trips” to Israel. As she continued speaking, a tall young man with long brown hair, wearing black pants, a black shirt, and a COVID-mask that obscured his lower face stood in front of me. Wearing a high-visibility yellow vest indicating he was a rally marshal, he stood to block my view of the rally and told me, “We know who you are.”

At one point, I had asked him his name.

“Steve,” he said, before adding that he could tell me whatever name he wanted and it could be fake. He reveled in his anonymity and the license that came with it.

“I write for a lot of people.”

During it all, he made fun of my handwriting, which is pretty bad, even under normal conditions, and of my shaking hands. At some point during our confrontation, he tried to steal my pen from my hand.

Then there was a commotion in the main crowd as Nino Brown got ahold of the megaphone.

“Dexter Van Zile’s here in the crowd,” Brown said. “He’s a rabid Zionist with this group called CAMERA.” Boos and shouts of “Shame!” resonated in response. Brown went on to declare that while the crowd was out exercising its right to free speech, others were there posing “as friends under the guise of journalism only to smear and muckrake on our righteous movement.”

He then started a chant of “Zionist Go  Home!” to get me to flee the scene. In response, I chanted “Am Yisrael Chai” a few times just to let them know that there was another side of the story.

It wasn’t something they wanted to hear. Later one of my colleagues asked me, “What prompted you to do that?” It seemed obligatory.

The declaration that the people of Israel live elicited a rage from the crowd. A young woman emptied a bottle of water on me, another spit on me. Others called me a Nazi, a bitch, a f—–g pig. An African American man in a yellow vest told me I had “f—–d up” for not leaving when told to and at one point, I was told I had offended people in the crowd by uttering the word “Israel.”

Two people, bless their souls, tried to calm the maelstrom. “He’s done nothing wrong,” a Latino man about my height declared emphatically to the crowd. Another attendee, a woman whom I did not get a good look at, declared the same thing, in an attempt to calm the crowd, but to no avail. To be fair, maybe it was their admonitions that prevented disaster.

Eventually, one of the rally organizers, a young black man wearing a green yellow vest told me that the rally was going to move down the street and that I needed to yield way.

This seemed like a reasonable request, so I turned my back to him and started walking to the side and it was at this point the rally organizer shoved me. I took up my position with my back to the wall and took off my hat in a mock expression of aw-shucks comity.

As this was happening, one of the rally leaders, a man with a kippah whom I had recognized from the “Day of Rage” rally in 2020, started yelling for the crowd to leave me alone — not out of a principled commitment to non-violence or free speech — but out of a cynical acknowledgement that things were getting out of hand and that anything physical harm done to me would harm their cause.

As the crowd moved on, the young African American man offered me one last warning.

After I filed a report with the Boston Police Department (which, six days on, has yet to contact me for details about what happened), CAMERA made the decision to post and publicize video of the events described above and broadcast them on Twitter.

In response, the JCRC, the ADL and the local office of the American Jewish Committee (AJC) have expressed shock and dismay over what happened, affirming both the group’s right to protest and my right to cover the protests as a researcher. But the powers that be in the city of Boston have yet to speak a word of about the events, prompting strong feelings of isolation on the part of Jews. Jeremy Burton, executive director of the JCRC, one of the institutions targeted by the rally, tweeted, “Where are the good people of Boston?” (There were two at the rally, but that’s about it, Jeremy.)

The melee I endured and the official silence I’ve witnessed in the days since demonstrates that American civil society is in bad shape and that the people responsible for ordering public life in the Boston area are indifferent to their obligations as leaders.

The upshot is this: The anti-Jewish hate we’ve seen for years on college campus is now in the streets of our cities, courtesy of groups like the state funded SJP at UMASS Boston.