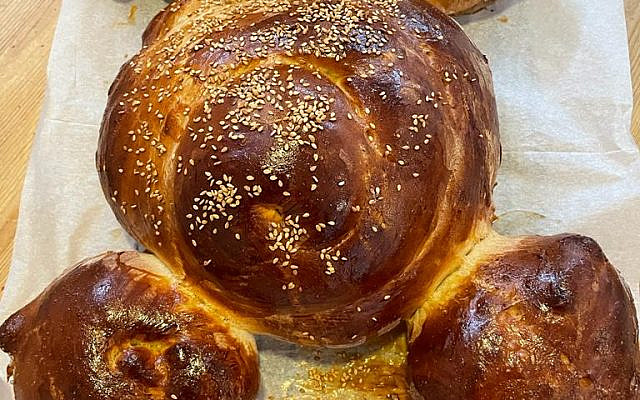 After a beautiful Yom Kippur day, our weather has been a bit on the chilly side, as well as a bit brisk.

The weather will remain a bit windy, especially in the afternoon, and temperatures during the first night of Sukkot will be chilly.   Yet, temperatures will moderate upwards a few degrees as we reach the middle of the Sukkot holiday. Towards the end of the week, more middle level moisture will arrive, and early next week — in time for Simchat Torah —  could see our first chance of some showers as a frontal system moves in from the northwest.

Mediterranean sea surface temperatures are well above normal.  One potential consequence of this is the potential for tropical storm like Medicanes to form, and be even more intense than usual.  Moreover, as our fall turns into winter, the abnormally high sea surface temperatures can combine with synoptic low pressure systems to produce in our area severe thunderstorms, leading to urban flooding, a high number of lightning strikes and wind damage.

In other parts of the world, Hurricane Ian devastated southwestern Florida, including Naples.  Is this the new normal?

More than a decade ago, I led research on the potential impacts of climate change on Hurricane Katrina type storms.  The research showed that the intensity of a Katrina type storm (Category 5) would depend on both greenhouse induced changes in atmospheric wind shear and sea surface temperatures.

While the research did not “say” anything about the frequency of these types of  storms, it showed that increases in sea surface temperatures alone could lead to even more intense storms.

In other words, the argument is not necessarily about whether hurricanes will be more or less frequent in the future, but their potential for causing even more extreme damage than they typically do.

Despite these dire comments, we may have a reprieve of sorts, which would allow some time to invest further in new technologies that could be used to limit humankind’s carbon footprint.  As noted here, we may soon be in for a rare occurrence: a “Dalton Minimum.”   What this means is the sun may be going quiet, even more quiet (lack of sunspots) than perhaps the last couple of hundred years.  Since sunlight combines with greenhouse gases to produce warming, reduced sunlight might just lead to a bit of cooling.  One caveat: there’s a lot of energy stored in the oceans in the form of heat — which produces a lot of evaporation.  When you mix evaporation with cooler (cold winter) weather, you get snow.

In fact, in 1816 the Dalton Minimum combined with a volcanic eruption and a rare shift in the solar mass to produce what is known as the year without a summer.  It snowed in the summer time in areas of the northeastern United States.

About the Author
Dr. Barry Lynn has a PhD in Environmental and Atmospheric Sciences. He has an undergraduate degree in Biology. He is a researcher/lecturer at the Hebrew University of Jerusalem, and is the CTO of Weather It Is, LTD, a weather forecasting and consulting company.
Related Topics
Related Posts