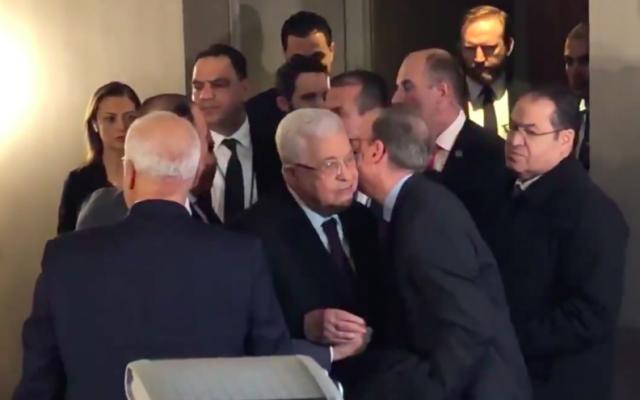 Upon hearing the news, I sent out the below message on Twitter:

I will not mince my words. #SaebErekat was an evil man who had the blood of Jews & Americans on his hands.

Please stop. He was a terrorist who wore a fancy suit. The world is a better place with him gone.

I didn’t sent this out to celebrate Dr. Erakat’s death, but at the same time, I will not be mourning his death.

Any Jewish leader who is mourning the loss of an evil man should be ashamed of themselves. Truly ashamed. One of those “leaders” is none other than Jeremy Ben-Ami. Surprise surprise.

I was honored to call Dr. Saeb Erekat not only my partner in the search for peace between Israelis and Palestinians but a brother who shared a deep commitment to human rights, democracy, peace and the rule of law. The world is a lesser place today for his loss. https://t.co/zNDiAv5OA0

As if this statement isn’t enough to make my blood boil, J Street went on to offer this mini-eulogy of Dr. Saeb Erakat stating he “dedicated his life to serving his people at the highest levels of politics and diplomacy, and to pursuing Israeli-Palestinian peace.”

These words have no substance. Dr. Saeb Erekat was not a peace negotiator who served the best interest of his people. He was a phenomenal negotiator for himself and his bosses.

J Street went on to say: “He was a true friend to J Street and the pro-Israel, pro-peace movement, gave major addresses to several national J Street conferences and events, graciously met with countless congressional and leadership delegations to Israel and the Palestinian Territory and built warm personal relationships with members of J Street’s staff and leadership.”

Do Jeremy Ben-Ami and I live on the same planet? Yes, we do…so what am I missing here?

Here’s the deal folks – I’m not missing anything. We are simply on polar opposite sides of the Pro-Israel advocacy world.

I don’t think Jewish Americans should be telling Israel what they can or can’t do on their sovereign land.  Ben-Ami feels the opposite and doesn’t think Israel should be building new communities. I think we should be supporting what our brothers and sisters in Israel seek and desire.

I don’t think we should extend our hand for peace with individuals/countries who have a long-standing track record of calling for the destruction of the Jewish state and all of our people. Ben-Ami supports the Iranian Regime through his support of the failed JCPOA.

I don’t think we should be publicly embracing Palestinian leaders who are personally responsible for growing the pay-for-slay program that rewards Palestinians terrorists with hundreds of millions of dollars for killing Jews and Americans.  Ben-Ami chooses to give Mahmoud Abbas hugs and kisses.

I’m confident that I’m on the right side of history. I will not attempt to re-define zionism into a social justice movement, I will continue build the zionist movement that calls for the Jewish people to be able to self-determiniate in our biblical homeland.

I will not publicly embrace leaders who have Jewish and American blood on their hands, I will reject them and speak out against them.

I will not remain silent as thousands of rockets fall on Southern Israel.

I will not remain silent as the Iranian Regime keeps their people living in poverty while they fund terrorist proxies around the world & chant “Death to Israel”.

I will not support legislation that would reduce the U.S. Foreign Aid to Israel.

I will not remain silent when members of Congress spend more time advocating for the Boycott, Divestment and Sanctions (BDS) of the world’s only Jewish nation then they do on items that affect their constituents.

I will do the opposite – I will name them: I’m talking about Democrats such as Congresswoman Ilhan Omar, Congresswoman Rashida Tlaib, Congressman Hank Johnson, Congresswoman Alexandria Ocasio-Cortez. I would gladly name a Republican Congressman who openly advocates for the BDS movement but there are none to name.

In closing and in the words of Israel’s 6th Prime Minister Menachem Begin, “I am not a Jew with trembling knees. I am a proud Jew with 3,700 years of civilized history.”

Like Begin, I too am a proud Jew and I will not stay silent when the likes of Jeremy Ben-Ami seek to undermine Israel and Zionism. I hope you will join me in speaking out against Jeremy Ben-Ami and J Street!