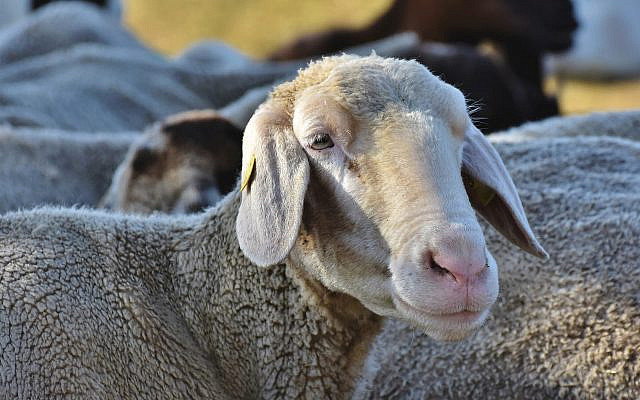 Animal sacrifice is a religious obligation in the time of holy Temple that involved offering up animals on the Temple altar to G-d, but also as Jews we have unfortunately known sacrifice as “sheep to the slaughter” through millennia of persecution and Holocaust.

As the terms implies, Temple sacrifices involved giving something of yourself (i.e. sacrificing) to G-d.  The Hebrew term korban, also comes from the root karov, which means to draw close, in this case it is a way of thanking, communing with, and praying to G-d.  And finally, korban also means victim, and a sacrifice was a means of expressing regret or atonement for sins, by offering an animal as a substitute (i.e. a victim) for something that should otherwise happen to man for wrongdoing. The idea was that man would recognize when he did wrong, regret it, and perform ritual sacrifice of animals in the Temple in lieu for some level of punishment that otherwise should’ve been done to him.

However, in thinking about sacrifices as animal substitution for consequences to man, we can also reverse this logic to explore what sacrifices can teach us about consequences to man in their relationship to the Jewish people. In this particular case, I am thinking about Jewish responses to those who desire to be our friends and want to build kind and productive relationships with us or the opposite, to our enemies, who seek to persecute, attack us, and make the Jews their korban, victims.

In this vein, it is fascinating that the sacrifices outlined in the Torah portion of this week, Vayikra, range from Shelamim (“Peace Offerings” like from the word Shalom) to Olah (those offerings that are “raised up” and are wholly consumed by fire). In other words, when people reach out to us in friendship and brotherhood, we are ever-ready to develop a far-reaching relationship in full alliance, brotherhood, and peace (Shelamim) between us. However, when the opposite is true, and nations or terrorists seek to destroy us, then our response must be to rise up (Olah) and destroy them first like a fire consumes the sacrifice.

In between these extremes of peace and war, are sacrifices of Minchah (“Meal Offerings”), Asham (“Guilt Offerings), and Chatat (“Sin Offerings). In cases when others want to engage and work with the Jewish people, then we should sit down as in a meal (Mincha) “breaking bread” together (and oil and frankincense spice) and work together in mutually beneficial or altruistic ways. In yet other cases, when others express negative intent and some level of guilt (Asham) to us then we must deter them from pursuing harm to this. And finally, when people are acting and “sinning” against us (Chatat) then we must prevent them from hurting us through legitimate self-defense. In all these cases, defending our people involves some sort of sacrifice as we must act economically, diplomatically, and even militarily to stop those that seek to violently aggress on us, persecute us, and even seek our total annihilation.

Moreover, as we celebrate Passover this coming week, we learn how the Jews were commanded to sacrifice a paschal lamb and put the blood on the doorpost of their houses, so that angel of death would pass over their families (Exodus 12:7-12)

They shall take from the blood and put it on the two doorposts and on the lintel on the houses in which they will eat it…I will pass through the land of Egypt on that night and I will smite all the firstborn in the land of Egypt from animal to man.

Clearly, already in ancient Egypt, animal sacrifice was more than just an offering to G-d, but also a message of protection for the Jewish people.

In short, traditional korbanot in the Temple can teach us not only about how animals can substitute for people in our sacrifices to G-d for thanksgiving, communion, and acknowledging of consequences and teshuva (repentance) for our wrongdoing, but also how the Jewish people can relate to the nations of the world  in everything from full peace, positive engagement, acts of guilt and sin against us, and even full-fledged war. Sacrifices teach us that while peace is always the desired state and fiery war a last resort in our self-defense and preservation, we know that after thousands of years of anti-Semitism, persecution, and Holocaust, we are no longer the sacrificial lamb on anyone’s Temple altar. In so far as Jewish lives now-a-days are intertwined and dependent on the State of Israel, and they are providing not only a homeland for the Jewish people, but also a refuge for them, an attack on the one is an attack on the other. We will not be the sacrifice again; we are done.