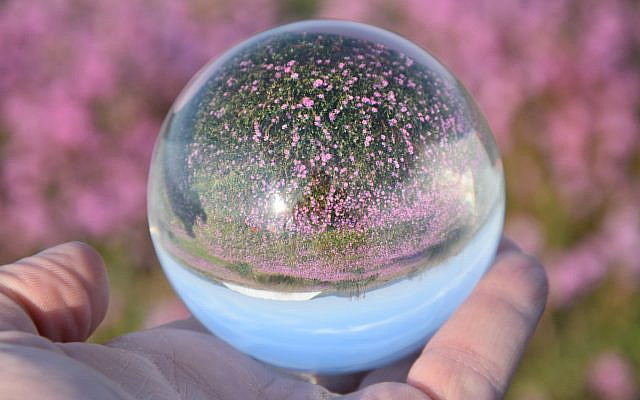 When G-d appoints Moshe as His emissary to redeem the Jewish People from their Egyptian bondage, He splits the leadership position into two by saying that Moshe will speak whatever G-d commands of him, and Aharon will relay those messages to the Pharaoh. In doing so, G-d says to Moshe, “Aharon your brother will be your navi” (Ex. 7:1). We generally take the word navi to mean “prophet” and neviim to mean “prophets”, but in what way can Aharon be said to be Moshe’s “prophet”? Moreover, the Bible has another two words which also mean “prophet”, namely chozeh and roeh (see Avot d’Rabbi Natan, ch. 34). Do those words differ in meaning from navi, and if so, how?

Both Rashi (to Exodus 7:1 and Nech. 6:7) and his grandson Rashbam (to Gen. 20:7) connect the word navi with the word niv (NUN-YUD-BET), based on the appearance of the phrase niv sefatayim (Isa. 57:19), which roughly means “the fruit of the lips”. Rashbam further defines whom G-d calls a navi as somebody “who is regularly with Me, and he speaks My words, and I love his words and listen to his prayers.” According to this, the word navi denotes he who has fruitful lips (in terms of prophecies and successfully prayers).

Nonetheless, Rabbi Avraham Ibn Ezra (1089-1167), in his commentary to Ex. 7:1, rejects this understanding. He explains that it untenable to claim that the root of navi is NUN-YUD-BET because, as he notes, every time the word navi and its cognates appear in the Bible there is always an ALEPH. This suggests that the ALEPH is part of the root, such that navi’s root is actually NUN-BET-ALEPH. Rabbi Yonah Ibn Janach and Radak in their respective lexicons (both entitled Sefer HaShorashim) also adopt this approach. [I do not know how this jibes with Radak’s comment elsewhere (to I Sam. 9:9) that navi is related to niv sefatayim, which is in consonance with Rashi and Rashbam’s explanation.]

Rabbi Samson Raphael Hirsch (to Gen. 20:7) also accepts NUN-BET-ALEPH as the root of navi. He deduces its meaning by extrapolating from a similar root: NUN-BET-AYIN, which means “to flow from” or “to become the source of.” Rabbi Hirsch thus concludes that a navi is the source from whence the word of G-d issues, the vehicle through which His spirit speaks to man.

Rabbi Shlomo Pappenheim of Breslau (1714-1814) maintains that the root of the word navi is the biliteral combination BET-ALEPH, which means “come” or “bring”, because it is the prophet’s job to “bring” the word of G-d to its intended audience. In the context of Moshe and Aharon, Aharon was Moshe’s navi because his role was that of a spokesman to “bring” Moshe’s words to the Pharaoh.

Way back in the year 2018, archeologists found a seal with the name Yishaya (Isaiah) inscribed on it, followed by the letters NUN-BET-YUD. Could this seal be that of Isaiah the Prophet? It could be that this depends on how one understands the root of the word navi. If the letter ALEPH is part of the word’s root, then the absence of an ALEPH on this seal would suggest that the word after Yishaya does not read navi, but reads something else (such as “Nobite”). But if the letter ALEPH is not part of the root of navi, then it is possible that this seal actually belonged to Isaiah the Prophet.

The Bible explicitly tells (I Sam. 9:9) that what was called a navi in later times was the same role as what used to be called a roeh in earlier times. The Malbim explains that in earlier times a prophet was called a roeh because the main function of the prophet was to “see” with his Divine Inspiration, and use that to help individuals discover that which was hidden from them (whether in terms of lost items or self-improvement). For example, when Shaul lost his father’s donkeys, he sought out the prophet Samuel to either help him find them or figure out what sin he had committed which led to this loss (I Sam. 9). In essence, a roeh was sought out by those wished to consult with them.

In later generations Jewish society degenerated, and a new type of prophet emerged: A navi was G-d’s messenger sent to rebuke the nation for their sins, and bring them back to the proper path. The navi did not generally speak to the individual, but to the public at large. As opposed to the roeh who was sought out, the navi was a feared character, from whom people tended to run away.

The Vilna Gaon (to Prov. 22:12, Isa. 1:1) explains that the terms navi and roeh/chozeh focus on different aspects of a prophet’s function. The word navi, as we mentioned above, is related to the word niv which refers to the prophet’s mouth. That word focuses on the prophet’s role in relaying with his mouth G-d’s message.

However, the words roeh and chozeh refer to the prophet “seeing” a certain vision which he is to convey to others. Within this role of the prophet, the Vilna Gaon explains, there are two types of Seers: One is called a roeh,which is the Hebrew word for “he who sees”, and was the term used for the earliest prophets, whose clarity in the visions they saw was quite sharp. A later prophet, by contrast, is called a chozeh, the Aramaic word for “he who sees”. Because Hebrew is considered a more spiritually-attuned language than Aramaic, later prophets are referred to by an Aramaic term for “Seer”. This shows that those prophets were not as clear on the meaning of their visions as the earlier prophets were. For this reason, a later prophet is called a chozeh (and his vision a chazon/machaze), and an earlier prophet, a roeh (and his vision is called a mareh).

Okay, so now we understand how, in general, the word navi refers to a “prophet”. But in the context of Moshe and Aharon, G-d tells Moshe that Aharon will be “your [i.e. Moshe’s] navi.” This navi does not seem to mean “prophet”, but something else. Targum Onkelos (to Ex. 7:1) and Rabbi Saadiah Gaon (there) explain that when G‑d tells Moshe that Aharon will be his navi, this means that Aharon was to serve as Moshe’s meturgaman (“interpreter”, “translator”, “spokesman”) before Pharaoh. Interestingly, the root of the word meturgaman/targum seems to be REISH-GIMMEL-MEM, a root which has no other cognates in Hebrew, but in Ugaritic means “saying”. So there you have it. The Hebrew word for “translating” from/to another language is actually derived from the word for “saying” in a different language!