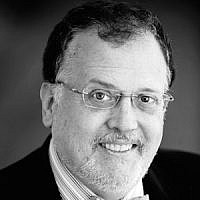 The Blogs
Jonathan Javitt
Apply for a Blog
Advertisement
Please note that the posts on The Blogs are contributed by third parties. The opinions, facts and any media content in them are presented solely by the authors, and neither The Times of Israel nor its partners assume any responsibility for them. Please contact us in case of abuse. In case of abuse,
Report this post.

Of the many remarkable aspects of the passing of Shimon Peres z”l, I believe the most remarkable — and least remarked upon — was his request, memorialized in his will, to have the prayerbook hymn “Avinu Malkeinu” sung at his funeral.  Not only was the hymn sung by a treasured and chosen friend, the entire audience, Jew and non-Jew, secular and religious, sang along with love and reverence.  The hymn, translated as “Our Father, Our King,” is the high point of the High Holiday liturgy and is one of the most profound utterances of human faith in the Divine within the Jewish religion.  Avinu Malkeinu makes no reference to Jews, to Zionism, or to Israel.  Rather, it expresses a plea for divine mercy, healing, and ends by beseeching G-d to deal with us charitably and mercifully, despite our many human failings.  People who never imagined either that Prime Minister Peres would recognize this hymn or that they, personally, would ever sing this hymn, sang it to mark his passing.

President Shimon Peres is remembered as a lover of Israel.  He is loved as a Zionist.  He is revered as a peacemaker.  He led governments that had, at best, a cold working relationship with the religious sectors of Israeli society. Yet, in his will, he asked to be memorialized first as a Jew who recognizes our ineffable and historical connection to a divine force that has guided us since Abraham’s first encounter with G-d in the desert.  Simon Peres cannot have chosen that hymn by accident.  There are certainly many Zionist hymns that he could have selected and would have been expected to select to mark his passing.  He certainly was not a man who spoke about G-d in his daily life or his public oratory.  He was not known for public synagogue attendance or for public observance of the many strictures of traditional Judaism.  Yet, in his passing, he asked to be remembered with words that are associated with the apogee of the Jewish connection to the divine being.  Not words that praise G-d, but rather words that beseech G-d to have mercy upon us despite our faults.

A challenge I have faced in my two years of living here is coming to grips with the religious/secular divide that permeates all aspects of life in Israel.  Over and over, I have had people tell me that they are most certainly “Chiloni,” or more commonly speak to me in English and say “I am not religious,” only to learn that they observe Shabbat dinner with their family every week and that they keep various other Jewish customs.  I have come to learn that the least connected secular Israeli is likely more religiously-connected than the average diaspora Jew.

In this profound act and, perhaps his final message of reconciliation, Prime Minister Peres has taught all of us, religious and “secular” Jews alike the core meaning of what it means to be a “Chiloni” Jew in Israel.  One of the most challenging parts of adapting to Israeli citizenship is relinquishing one’s diaspora notion of how different Jews relate to one another.  When we live as a minority in predominantly Christian countries, there is a nearly automatic bond between Jews that has little to do with what synagogue one attends, or if one attends at all.  There’s a fluidity in which people have little compunction about attending one another’s holiday observances and houses of worship.

In Israel, however, the conflicts between religiously observant and non-observant sectors of society create a discord and division that causes those who are not religiously observant to be zealously non-observant in their behavior.  This zealous non-observance is exacerbated when those on the other side feel free to bring the country to the edge of chaos over and over in defense of their view about how others, be they shopkeepers or railroad construction workers must behave.

In his passing, Shimon Peres chose to emphasize our 3,000 year connection to our faith and to our homeland, rather than focusing of the 93 years with which he was personally involved.  Perhaps he was also emphasizing the connection all of Abraham’s descendants have to the God of Abraham. There’s a unique and unexpected message in that final bequest of President Peres.  A message that will take us some time to digest and internalize if we are to fully benefit from his legacy.

About the Author
The author is a physician, policy expert, and thought leader in healthcare transformation and digital health. He has served as Professor of Medicine and Public Policy at Johns Hopkins and Georgetown Universities and been commissioned by US Presidents Clinton and Bush to serve in several roles within the Executive Office of the President focused on health policy and national security. In September 2014 he and his family made Aliyah to Zichron Yaacov.
Related Topics
Related Posts
Comments