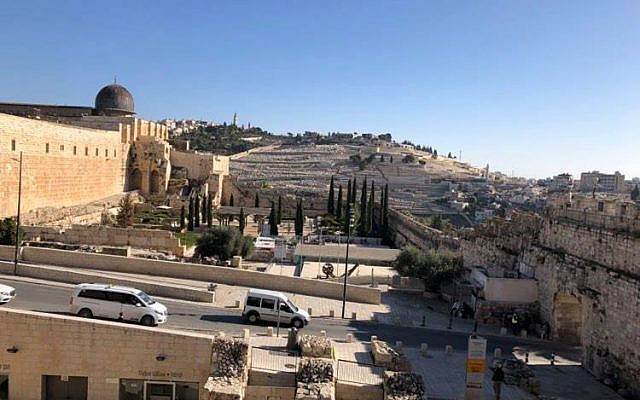 On Tisha B’Av afternoon, the Nachem prayer is added into the amida of the Mincha service:

The mourners of Zion

The mourners of Jerusalem,

And the city that is in sorrow, laid waste,

That grieves for the loss of its children,

That is laid waste of its dwellings,

Robbed of its glory, desolate without inhabitants.

She sits with her head covered like a barren childless woman.

Legions have devoured her;

Idolaters have taken possession of her;

They have put your people Israel to the sword

and deliberately killed the devoted followers of the Most High.

And Jerusalem raises her voice.

My heart, my heart grieves for those they killed;

I am in anguish for those they killed.

For you, O Lord, consumed it with fire

And with fire you will rebuild it in the future,

As I said (Zecharia 2:9) “And I myself will be a wall of fire around it says the Lord and I will be its glory within.”

Blessed are you HaShem who consoles Zion and rebuilds Jerusalem.

Now that we have the Modern State of Israel as well as a united Jerusalem, is this prayer still necessary and is it possible to make changes to reflect today’s reality?

In 1967, after the reunification of Jerusalem, Rav Shlomo Goren made some changes to the prayer, adding in excerpts from the Talmud Yerushalmi Brachot 4:3. However, in 1978, he retracted his changes explaining:

I will admit and not regret that after the bloody Yom Kippur War, when there was a moral and national deterioration in the people and the state, and in light of the recognition of the Palestinian people on our part, and the preparations made here for the betrayal of much of our land … I see no reason to change the original nusach (format).

Rav Ovadiah Yosef was against changing the prayer:

Since the text of the prayer was established by the men of the Great Assembly, we lack the power to change it. Additionally, not only is the physical state of the city on a low level, but the religious level of the people of Israel in general is severely lacking. The Temple Mount and The City of David which is directly south of Temple Mount are almost entirely in the hands of hostile Arabs and are for most purposes “mournful, ruined, scorned and desolate.”

Rav Aharon Lichtenstein recited the regular nusach. However he removed the following words which do not ring true today:

That grieves for the loss of its children,

That is laid waste of its dwellings,

Robbed of its glory, desolate without inhabitants.

I felt on the first Tisha B’Av after the Six Day War that I could no longer say in my prayers these things, which are an examination of a liar before God. Not only throughout the whole year but especially on holidays, including the 5th (Yom HaAtzmaut) and 28th of Iyar (Yom Yerushalayim), Jerusalem is bustling with celebrating, thousands upon thousands of sons of the nation … but even on Tisha B’Av, the day of national mourning, when masses of Beit Yisrael come to the Western Wall , wrapped in mourning for the destruction of the house, even then a certain corner is felt in my heart, into which mourning can not penetrate, it is a corner of joy at the beginning of the growth of our redemption … and therefore there is no doubt that there is a liar before God to say this about Jerusalem: “The desolate city of desolation without its sons.”

While it was too soon to change the prayer, one would could not honestly say that the city was in a state of destruction and denigration. Therefore, Rav Chaim David HaLevi added the word “she-haytah — that was” before words of destruction, indicating that the city had been destroyed.

According to the Beit Yosef in Hilchot Tisha B’Av:

Any time that the Beit HaMikdash is not built- the whole city of Jerusalem is considered as “chareva”, destroyed…

We see here that there is a fine line between if we are living at the time of exile or at the time of redemption and therefore it makes sense not to officially change the prayer by adding to it. However, if we want to be true to ourselves about what is happening in the modern city of Jerusalem today it makes sense to remove the phrases that Rav Lichtenstein took out. However, if we follow the thinking of Rav Soloveitchik and Jerusalem is referring to the Temple Mount which is desolate, where Jews are forbidden to pray and are only allowed to visit during certain hours with certain conditions then those words should be left in.

In any case, Tisha B’Av is a time to reflect on our loss of the Beit HaMikdash and even though we have the Modern State of Israel, it will not be fully complete until the Temple is rebuilt speedily in our days.