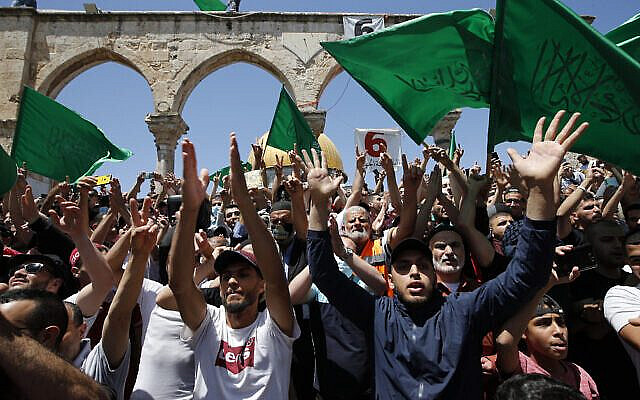 People hold Hamas flags as Palestinians gather after performing the last Friday of Ramadan to protest over the possible eviction of several Palestinian families from homes on land claimed by Jewish settlers in the East Jerusalem neighborhood of Sheikh Jarrah, May 7, 2021. Photo by Jamal Awad/FLASH90

BROOKYN—Palestinian Authority President, Mahmoud Abbas, called off elections last month, supposedly because Israel was prohibiting the Arab residents of East Jerusalem, from voting. However, the early-May rioting at the Temple Mount, at which, these same Arab residents, transformed into violent anarchists, could be seen waving the green flag of Hamas. Therefore, don’t be surprised when what appears as ethnic oppression in the form of districtwide voter suppression, is a methodical and tactical security measure. Hamas is an existential threat. Like Islamic State or even al-Qaeda, they possess a metaphysical ideology at their core—like the Nazis—kill as many as necessary until you see the white flag of surrender, but the ideology never dies. By calling off the Palestinian Authority election, and not allowing for a rotation at the helm of the Fatah party, Mahmoud Abbas is sending his Iranian-backed counterparts in the Gaza Strip, an assist.

Leading up to the holiest night of Ramadan, Abu Mazen was quoted by TOI saying, “…the continuation of the settler attacks on the holy places and the homes of Palestinian residents, their expulsion and expansion of settlements — will lead to an all-out conflict in all the Palestinian territories.” The article also reads that “…according to Channel 12, current discourse in the Palestinian street is of a ‘war for Jerusalem and the Al-Aqsa Mosque.’” In truth, you can’t tell the difference between the supporters of Hamas and the supporters of Fatah, the line is blurred; and this is the real reason for the jettisoning of PA elections.

Civil discord amongst Hamas and Islamic Jihad-supporting Arab-Israelis, composed of secular Sunni mob rule, which attacked a Jewish teacher, struggling to keep a peaceful calm among his students, in Akko, where a theatre that was a symbol of coexistence between Jews and Arabs was torched and destroyed; and has destroyed many synagogues in Lod, in what Israel President, Reuven Rivlin, calls a wave of anti-Jewish “pogroms”, are an existential threat, as well.

Don’t get me wrong: you wouldn’t find this blogger in Sheikh Jarrah, taunting fortuneless and stateless residents with cameras, as they stand to be evicted (four families in all), from their homes, by a strange Jewish court, waving the Israeli flag and chanting provocative slogans and ethnic slurs. ‘Perhaps,’ I wonder aloud, ‘should there not also be an Arab court; a non-interested party, non-affiliated, non-invested perhaps, to oversee residential jurisprudence?’  However, while I aim the former question at the State of Israel; I ask the Palestinian Authority, and perhaps, the nations of the Arab League: ‘is the eviction of four Arab families, worth a war that will perish hundreds?”

Rockets coming from Hamas and Islamic Jihad in the Gaza Strip, as well as rockets fired into Israeli territory from Lebanon, as well as rockets coming from Hezbollah in Syria, are like the civil discord, an existential threat to the Jewish state, and as the Biden administration has recently said, Israel has a right to defend herself against such threats. And it is crucial that this Biden administration, who is under congressional duress from the likes of Ilhan Omar (D-Minn), Alexandria Ocasio-Cortez (D-NY) and Palestinian-American Rashida Talib (D-Mich), as well as from Israel-haters in the American mainstream press, such as Becky Andersen of CNN, maintains their clear vision of the Jewish state, and who matches the white knuckles of the Zionists, with a steadfast grip of their own on the 1947 Partition Plan, and even the Israeli declaration of independence in 1948.

The problem—this time around, and unlike 2012 and 2014, is that the war is being fought inside Israel, by civilians. Ergo, the year 1948, when Israel was first recognized as a state, and the Palestinian-refugee question was beginning to reach a pitch loud enough so that not only the Zionists, but the rest of the world began listening, is at the center of the current conflagration. Because of the significance of 1948, this war is not being fought over real-estate in East Jerusalem, or Jewish settlements built over the Green Line since 1967, but it is about the right of the Hebraic people to live in the land of Israel. And even the right, for these people to err, and be fallible, as in what could possibly be the case in the Sheikh Jarrah evictions. That these civil breakdowns of communication and agreement result in a dead seven-year-old Israeli boy, and several  hundred dead Palestinians, leaves us declaring: ‘1967 isn’t the issue, 2021 isn’t the issue, 1948 is and always will be’; and scratching our head and wondering, concerning our Arab neighbors, ‘Is it worth it?’