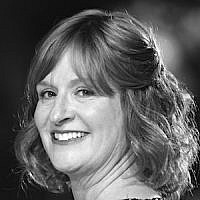 The Blogs
Chevi Schrader
Apply for a Blog
Please note that the posts on The Blogs are contributed by third parties. The opinions, facts and any media content in them are presented solely by the authors, and neither The Times of Israel nor its partners assume any responsibility for them. Please contact us in case of abuse. In case of abuse,
Report this post.

The Kinneret was crowded, and I was trying to maneuver myself without getting kicked. The Swim4Sadna had begun.

There were so many swimmers around me, I couldn’t concentrate on my stroke, and, even though I’d taken a few swimming lessons and had drastically improved, I went into my old, default, “wrong” way of swimming. After a few minutes, the swimmers had spread out, but I was already completely winded, my only thoughts being, “What were you thinking? You are never going to make it. This is insane!” I tried flipping over on my back and doing the backstroke just to get some air, but then I found myself off course. Everyone was passing me and I was falling behind! I was starting to freak out.

It was a long and challenging personal journey that had brought me to the starting point of the Kinneret swim, and only minutes later I was ready to give up.

It had started a few years prior when I’d heard about Swim4Sadna, an annual women’s Swimathon which raises money for Sadnat Shiluv. This program, located in Gush Etzion, integrates children and adults with special needs into the community. My initial reaction was, “Wow, that is so impressive! I wish I were a strong enough swimmer to do that.” But realistically I could barely do twenty laps across the pool without getting winded.

Two summers ago, I was really sick – scary, life-threatening sick. When I finished the chemo treatments and tried to get back to a normal routine, I was set back by side effects of medication that made walking difficult. Swimming the Kinneret was the last thing on my mind.

As time went on I became more and more frustrated by my lack of progress, still weak and tired and run down. Three trips to the States to see my ailing parents added to my exhaustion, and a daughter’s wedding, although exciting and thrilling, left me totally zapped.

After Pesach this year, I could barely get off the couch. I was determined to take serious measures to get myself back into shape. I started with eliminating certain foods from my diet and went back to the gym three times a week.

Three weeks before the Swim4Sadna I joined the local pool. The first day I got into the water, it felt great, but I could barely do ten laps. I pushed myself, did twenty the next day, and thirty the day after that. And then I noticed the woman swimming in the next lane, gliding effortlessly. I approached her about instruction; it seems that I have been swimming wrong for over fifty years! After only two lessons, for the first time ever, I knew what to do.

The thought of my being able to do the Kinneret swim began to cross my mind, especially when my newly married daughter told me she’d signed up. I worked up the courage and registered, and within one day had reached the level of contributions necessary for participation. With practice, I worked my way up to a hundred laps and felt stronger and more energized.

The day before the swim my daughter and I drove up to the Kinneret. I was anxious about the swim, the cold water (as opposed to the heated pool), fish, and what could go wrong. But I was determined to do my best.

When we arrived, the feeling was electric. Women were with their daughters, sisters, or friends. They were getting their kits, catching up with friends and meeting new ones, and talking about the swim the next day. I saw friends from all over the country, women I don’t often get to hang out with. We checked into our rooms, were treated to fruit shakes and popcorn, and headed down to the beach to check out the water. I was relieved when I waded in and realized that the water was warmer than I’d anticipated.

The next morning we were up at dawn. We signed in, were ID’d for the swim, and donned our yellow bathing caps and goggles. More than one hundred women waded to the starting line. The excitement was palpable. I was nervous but ready. Yet when the countdown reached zero and everyone began swimming simultaneously, the lake was much more crowded than I’d expected. And that’s when all I could do was try to maneuver without getting kicked. It led to my “wrong” way of swimming, getting winded, and panicking. I was freaking out and ready to give up.

At this point, I gathered my inner strength and had a little talk with myself. “Chevi, it’s going to be so embarrassing when you tell everyone who sponsored you that you didn’t make it. You’ve been through harder challenges and have come out ahead. You can do this!”

And that was what I needed. I focused, found the rhythm, began working on my technique, and it all clicked. From that point on, it went smoothly. And more than that, I was able to enjoy. I took in the mountains, the clean air, and the experience of being with all these other women in the water, swimming for such a good cause.

I arrived at the finish line with the stragglers but felt only pride and exhilaration. What a great sense of accomplishment for us all. It was amazing to be with this group of strong, positive, supportive women.

It’s been almost two weeks since the Swim4Sadna, but I continue to think about it. For many reasons: I saw the challenge and, instead of turning from it because it was outside my comfort zone, I pushed myself and succeeded; once again, the support of family and good friends has made a huge difference in my success; I changed my point of reference from defining myself as being sick and weak to being strong and healthy.

As a therapist, I know that in moments of stress we fall back into our old, default negative patterns. But we can learn new behaviors with concentration and practice until they become second nature. As I tell my clients, people can change. It may not be easy, but it is so very worth it.

Now that the swim is behind me, I’ve realized that a few old clichés might actually be true. Slow and steady does win the race. Practice makes perfect. And you can do anything you set your mind to. My goal is to remain strong and healthy so I’ll be able to swim again next year. I hope I can enjoy the fringe benefits as well – quality time with my daughter, meeting new and old friends, a toned and strong body, and freckles.

Chevi Schrader is a family therapist who lives and works in Chashmonaim. Chevi specializes in trauma and women’s health issues. She is a mother and grandmother to a growing tribe. Chevi loves nature, reading, and challenges. She can be reached at chevischrader@gmail.com, or 054.6467739.

About the Author
Chevi Schrader is a therapist who made Aliya from the USA over thirty years ago. She worked as a doula and childbirth educator for many years and then went on to get her Master's degree in family therapy. Chevi specializes in health issues and trauma using CBT, narrative therapy and SE (Somatic Experiencing).
Related Topics
Related Posts
Comments