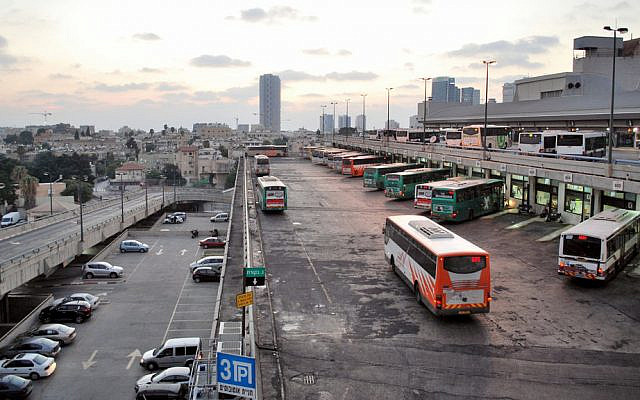 Added to this strange mix of people is the Central Bus Station. The main hub for buses going in and out of Tel Aviv, the station is the second biggest bus station in the world. A huge source of controversy since its opening in the early 90s, whole floors of this vast building are abandoned and many shops remain empty.

In the past year, I interviewed people in Shapira to see how they wound up there and get there thoughts on the neighbourhood. Here’s what one shopkeeper in the Central Bus Station had to say.

I’ve been coming to the Central Bus Station for something like 20 years. It’s my family’s shop – we’re a family run business, you know? I don’t live in this neighbourhood. I live in Holon with my family and grew up there too.

For sure all the immigration really changed the neighbourhood. I’m not saying that it was a good neighbourhood but, when I was a kid, most of the people here were Israelis. Now there’s almost no Israelis – just immigrants. Eritreans, Sudanese people, Filipinos – walk around the bus station and you’ll see.

It was better in the past definitely. Not because of the people though, there’s nothing wrong with them really. The problem is that they just work, work, work and then send all of their money outside of the country. Go look around the bus station, there are ten different places that do money transfers. In the past, Jewish people would work and then they spend their money in the country, shops like ours or wherever. Some people speak about the immigrants undercutting wages too. As far as I know, that doesn’t happen here in Israel. They get paid as much as everyone else.

Most of the shopkeepers in the Central Bus Station are Iranians. My family is Iranian too. My grandparents came to Israel ages ago though – in the 1950s. Not like some of the others that came after the revolution in 1979. There are some Iranian Jews in Israel that still feel very attached to the country. I don’t feel like that. What do I have there? Nothing! I was born here, my family is here, everything is here. I’m a real Sabra, Israel’s the only place for me.

All the Iranians came to open shops here ages ago – before the Central Bus Station was opened and before I was even born. I don’t know exactly why that happened. I guess it’s like dominos. One person comes and starts selling shoes, he says to his friend to come and open a clothes shop. And you have to remember that in the past Iranians were friends mostly with other Iranians. So that’s why, when you walk around, you see that most shopkeepers have Iranian roots.

To tell the truth, my relationship with the Africans is good. They are good people. I don’t like that people call them kushim and names like that. Eritrean, Sudanese – that’s what they are, my brother. If you were in England or in the United States, would you be speaking to me about niggers? I don’t think so. Yes, it’s from the bible but today the meaning of the word changed, do you know what I mean? It’s not a kind word my brother, it’s a racist way of speaking today.

My relationship with the Africans is just regular, I don’t know what to say. They come in, they buy things from me – no problem! The Filipinos are really, really good people. They work hard, they are friendly and they keep everything quiet. When you see them, everything is done right. To tell you the truth, the Eritreans are a little more problematic. They go out at night, get drunk and cause problems. Even here, we sometimes see fights between them because of their different religion or politics, things like that. It’s not like that with the Chinese or the Philipinos, you see it day-to-day, in the way they behave.

In every city in the world there is a particular neighbourhood, or even several neighbourhoods, that are run down. Go to New York or Paris and the central station there is probably shit as well. You can’t have a society where every single thing is good, where everything is 100 per cent great. You have the poor people, you have rich people, you have middle-class people. It’s just like that, it’s not a problem – everyone just has to live his life according to what’s good for him.

But yea, the government could do things to make it better. It’s ugly, the buildings don’t look nice at all. The place isn’t clean either. You know Ramat Aviv? It could be like that, they have nice parks and gardens. The place looks tidy, everything is new. It’s not like here with a balagan every day in the park nearby. But the problem here is people, drug addicts, illegal immigrants. Come here some day and you’ll be sure to see some Arabs from the West Bank that snuck into the country being arrested. My point is that, it’s a good idea to improve this neighbourhood but I don’t think it can happen.

Would I like to leave this shop, to do something different? Sure I would. The problem is I don’t have a choice, my brother. This is my family’s business and I have to work here. The other thing is that no one is going to buy this business. I mean, who wants to buy a shop in the Central Bus Station? Nobody.