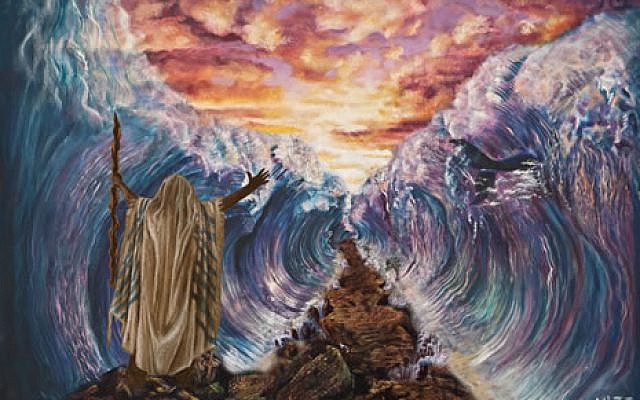 Do you like riddles?  Here is a riddle – what do these two figures represent in the context of Exodus?

No Idea?  How about a hint? Still no idea? Okay, here is the answer:

Yes, the first figure represents two doorposts and the lintel marked with the blood of Passover sacrifice, as it says:

And they shall take of the blood, and put it on the two side-posts and on the lintel, upon the houses wherein they shall eat it.  (Ex. 12:7)

The second picture is of the splitting of the sea, as it says:

And the children of Israel went into the midst of the sea upon the dry ground; and the waters were a wall unto them on their right hand, and on their left.  (Ex. 14:22)

Granted, both pictures look similar.  But is there any significance to this similarity?  Standing on the shore of the Sea of Reeds the Jewish people were standing at a threshold.  Behind them – in their past – was Egypt.  In front of them – in their future – was Sinaitic theophany – Giving of the Torah at Mount Sinai.  The sea was the doorway through which they were to enter into their future.  Just as the root of the word “mezuzah” is zuz – “to move,” God commands the Jewish people standing at the shore to keep on moving:

And the Lord said unto Moses: “Wherefore criest thou unto Me? Speak unto the children of Israel, that they go forward.”  (Ex. 14:15)

The similarities don’t end there.  On a deeper level, both have to do with time.

In my earlier post, Mezuzah and Time, I have explained how two doorposts and the lintel represent respectively past (right doorpost), the future (left doorpost), and the present (the lintel).

Sephirot Chochmah and Binah, when viewed as partzufim (“visages” or Divine configurations), are called Aba (father) and Ima (mother).  Da’at is called Toldot – children.  Hence, in the Kabbalah, we have an expression, “the past impregnates the future, which gives birth to the present moment.”

But why was it necessary to split the sea?  In quantum mechanics, the past and the future can be mixed together. A subatomic particle not only can be at two places at the same time, but it can also be in two moments in time! This is all because a particle can be in a state of superposition.

In 2013, theoretical physicist Caslav Brukner and his colleagues at the University of Vienna studied entangled photons separated in space as measured by two observers, Bob and Alice (in describing quantum-mechanical thought experiments, it is traditional to use two imaginary physicist – Bob and Alice).  The uncertainty principle constrains the amount of information that could be gleaned from the system, including information about time. Brukner described the scenario as follows:  “Alice finds a note written by Bob.  She erases it and writes a reply to Bob.  Then Bob comes into the room to write the original note.  The notions of past, future, and causality are all mixed up here.”

Jews had to go through the sea because they had to become masters of time. I discussed this in my earlier posts, Carpe Diem.  Remember Pharaoh, who in his dream stood sheepishly on the bank of the Nile refusing to deep his toe in the water (see It’s the time, stupid!).  Jews, on the other hand, had to go into the sea, which did not split until they were up to their chins in the water to prove that they had finally become masters of time.

Originally published on www.QuantumTorah.com on Jan 12, 2014.