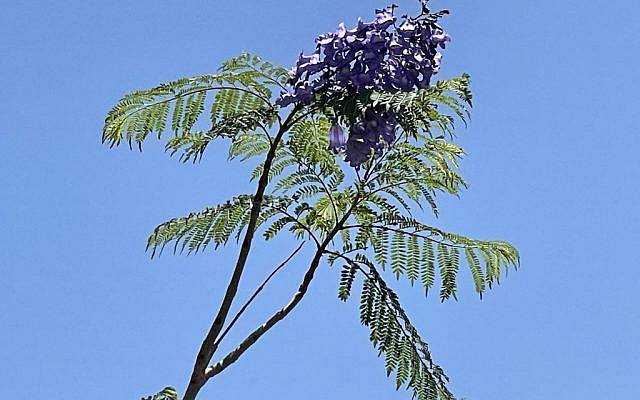 Matzah crumbs scattered on the table, like so many footsteps in the sand.
Dribbles of wine, splotches of horseradish, marking the path.

So it was the Seders came and went, the four cups of wine, the four questions, the four children, the three matzahs, the bitter herbs and sweet charoset sandwiched between, poignantly bittersweet this year. For as we retold the ancient story of the journey from slavery to freedom, there were others in the world swallowing only the bitter, threatened by oppression, in risk of freedom fettered, while we were easing the bitter bite with the taste of sweet apples and wine.

And so it was, this year, for those in the Ukraine, the persecution of a people in the ancient story was not only metaphorically re-lived, but sadly repeated.

In the days before Passover, I struggled with this incongruity, trying to reconcile scenes of the gorgeous Arizona spring, blooming in vibrant fuchsia, yellow, purple, with the grim images, devoid of color, coming from the East.

I was awed as a single purple flower blossomed from a spindly branch on our jacaranda tree, and marveled as it was joined with ever more blooms through the middle days of the holiday, making real its promise of rebirth.

Yet far away, the season’s beauty, its wondrous renewal, was shrouded in darkness, captured in grisly photos of death and destruction.

“They did not bomb my city,” writes a Ukrainian journalist in Mariupol, of the relentless Russian attack. “They bombed my spring.”

And yet, the earth’s perpetual cycling, its inherent drive to renew, its movement always forward, gives rise to even the faintest hope that can propel us onward. It is Rabbi Arthur Waskow’s beautiful evocation of the circling of the Jewish year as its rounding, its comforting continuity, its inevitable flow from one day to the next, one week, one month, one season, one year to another, that epitomizes its promise.

So it is with the Passover story, the Israelites’ flight from the villainous tyrant Pharoah, the miraculous parting of the sea, the courage to take the first steps in its crossing, and then the trek through the perilous desert. So our tradition teaches us, we are always moving on, for even as we celebrate the deliverance from Egypt, there are many more footsteps to take until we reach the Promised Land, and then beyond.

And so it was, just days before the holiday, Gerda Weissmann Klein, whose story of strength and survival in the face of unconscionable suffering at the hands of the Nazis inspired so many, sadly passed away. She embodied hope and its power to sustain us, the possibility of redemption even in the face of such brutalization, and the fervent belief that good could come out of pain.

And I recalled her inviting me for lunch and recounting the story of her friend Ilse and the raspberry she plucked through a barbed wire fence in the prison camp and carried with her an entire day to give to Gerda. As we chatted, a bowl of red berries waited on the counter for dessert.

So as Passover comes to an end, and as we search for signs of hope, for war abated, for oppression upended, for freedom renewed, I think of the bright spots that may yet signal its coming.

One purple blossom on a spindly tree.
One crushed raspberry to give a friend.
And a bowl full of sweet berries for dessert.