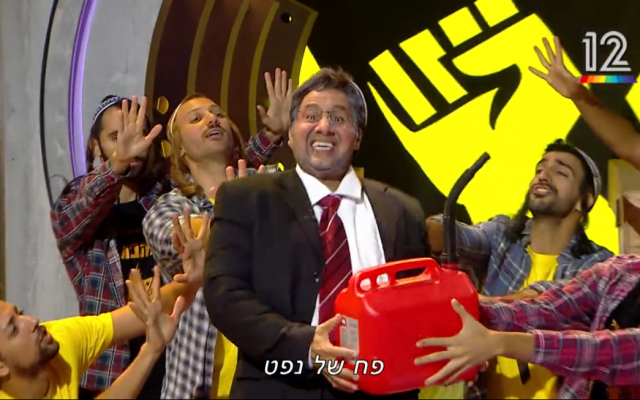 Rare is the occasion to praise a popular TV sketch show largely devoted to imitating politicians and mocking their accents. But Eretz Nehederet (A Wonderful Country) has done something worth taking notice of – and indeed worth celebrating as a sign that democracy, for now, remains alive and well in Israel.

I refer to the wonderfully subversive sketch from recent days’ season opener that addressed Benjamin Netanyahu’s alliance with the far-right phenomenon Itamar Ben Gvir. Flanked by thugs bearing a petrol can, the Ben Gvir character prances onto the stage to a song whose Hebrew lyrics are about Israeli politics, but whose melody is “Springtime for Hitler.”

The reference is to “The Producers,” a 1967 black comedy that was Mel Brooks’ first film. It tells the story of a pair of crooks who stage a musical designed to fail miserably and shut down on opening night, in hopes of pocketing the investment. But their plans go awry (as Israel may go awry) when “Springtime for Hitler” (like Ben Gvir himself) becomes a runaway success.

Yes, this is Holocaust humor on Israel’s most-watched television channel! I believe in humor with almost no limits, and I write that as the son of Holocaust survivors (my mother somehow lived through the Iasi pogrom, and my father a fascist labor camp). I know I’m in the minority on this, so it is good to find support from an unlikely quarter.

The sketch ripped up the kid gloves with which the cynical and self-serving Israeli media treats Ben Gvir. It shames the news programs in which this smiling and gregarious ultranationalist is routinely welcomed as a kind of mischievous rascal to be received with giggles, excitement, and a first-name basis.

This has normalized Ben Gvir to the point where his party threatens to become the third largest in the Knesset, and, if Netanyahu wins the election in November, it will also probably set the tone for the next government and bring Israel that much closer to civil war. And there’s nothing funny about that.

The sketch was a statement, and it is good that it was made: the intention of one in seven Israelis (according to polls) to vote for the far-right Religious Zionism list headed by Ben-Gvir and his ally, the fanatical Bezalel Smotrich, is genuinely shocking.

Smotrich, last heard from declaring that he would not want his wife giving birth in the same maternity ward as an Arab woman, favors enacting religious law in Israel.

And for those who have forgotten, Ben-Gvir was a central activist in the hysterical incitement campaign that led to the 1995 murder of Yitzhak Rabin, is an admirer of the mass murderer Baruch Goldstein, and was a follower of Rabbi Meir Kahane, who called for expelling the Arabs from the Land of Israel.

I first saw Kahane on American television in 1984, when I was a student in the United States, and he was leading a provocative march to Umm al-Fahm. I remember exactly what he said when he was interviewed at the scene: “There is no such thing as an Arab village in Israel. There is only a Jewish village temporarily occupied by Arabs.” Kahane was mean-spirited, but he possessed a turn of phrase, and I was in the audience when he visited our campus to rail against the Jewish American establishment which had rejected his ideas. He continued in this vein until an assassin’s bullet found him in 1990.

The normalization of Kahanism is a nightmare for the Israeli center-left (and in my opinion for anyone with a moral compass). And that, of course, is the milieu that spawned the writers of Eretz Nehederet.

It cannot be otherwise. All over the world and throughout history, in a dichotomy between conservatism and liberalism, the best humor does not come from the former. The right generally aligns itself with tradition, swearing by the range of practices and myths designed to keep a flock in line. This does not allow much room for humor. Only rarely do you find sophisticated satire (as opposed to puns and mimicry) coming from the right: the late American writer P.J. O’Rourke and British novelist Kingsley Amis may be exceptions, as was Israel’s own Ephraim Kishon. All have passed on, and today there is a wilderness.

Admittedly, the progressive left is even worse. While the right has crude and silly humor, the extreme left has none at all. Its puritans sit around as coiled springs just waiting to be offended by something funny (sorry – micro-aggressive objectifying and culturally appropriating).

Nay, humor comes from the liberal center. That is where one finds perspective, introspection, reflection, and a lightness of being. Because of the Israeli right’s alliance with fundamentalist religion and utter indifference to the human rights of Palestinians, the liberal center must oppose it. And so we got the “center-left” — an awkward label, an uneasy alliance, and a necessary thing.

The liberal center is not only the home field of humor, from Monty Python to Larry David to Mel Brooks himself. It is also, in the wider sense, the home of doing the right thing and playing somewhat fair. They have the bother of doubt. That’s why their campaigns are often less aggressive. Less memorable as well.

Hence, Eretz Nehederet also mocks Netanyahu’s opponents, and how: Benny Gantz is portrayed as a bumbler; Gideon Saar as a wide-eyed sap; Merav Michaeli as aloof and obsessed with gender; Gadi Eisenkot is an infantile truth-teller; and Yair Lapid as a bullshit artist.

One question remains: In the Ben Gvir skit, there was no hint at the Hitlerian analogy other than the borrowed melody itself. How many of the Hebrew-speaking viewers caught the reference to a 55-year-old film from the United States or remembered the original song? Three percent? Half a percent?

Why would the show’s writers convey their main point in a way that almost no viewers would understand? Merely to amuse themselves?

And then, while writing this, it hit me. I think I understand. The most seditious humor — refined as well as cruel — is that which mocks the audience itself. Without the audience knowing.