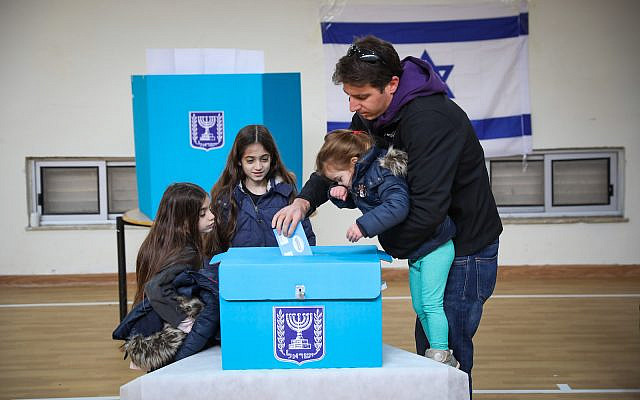 People cast their ballot at a voting station in Jerusalem, during the Knesset Elections, on March 2, 2020. (Olivier Fitoussi/Flash90)

As a gift to anyone fascinated by the mulishness of voters, I have analyzed the last two election outcomes, which seem to have yielded nearly identical results despite the high drama of the pandemic year.

Could it possibly be true that so few changed their minds that a 62-58 win by the parties opposing Benjamin Netanyahu in 2020 morphed merely to 61-59 in 2021? At first blush, it looks like the answer is yes, that is how identity-driven and entrenched Israeli politics appears to be.

But delve a bit deeper into the numbers (I offer a shared spreadsheet here) and interesting nuggets begin to stand out.

The Arab party vote fell from 581,507 (12.67% for the Joint List) in 2020 to 379,180 (8.6%) combined for the Joint List and Ra’am in 2021 – a loss of a whopping 202,327 votes caused by a decline in turnout from over 60% to under 50%. Even factoring in that the Likud vote among them rose slightly (perhaps 1% voted for Likud in the wake of  Netanyahu’s surprising and historically useful campaign in the sector), this corresponds almost exactly to the overall voter decline. The Jews voted in the same numbers, more or less.

Had the Arabs voted in the same numbers as in 2020 (and the choices stayed the same proportionately), the Knesset margin would have been 66 to 54 in favor of the Change Camp. The opposition would have risen to about 55% and the right would have fallen to 46.2%.

My conclusion is that most Israelis do not want Netanyahu to continue, even without counting the 6.21% who voted for the right-wing Yamina – whose chief Naftali Bennett says Netanyahu should go but which is counted here as part of his bloc anyway. The reasons why the opposition victory is not clear are divisions and the absence of a clear leader.

To begin to fix that, there is overwhelming interest in the center-left to end its self-defeating angst over collaboration with the Arabs, which would in turn encourage Arab citizens to vote in large numbers again. These Arab citizens were plainly demoralized by what was perceived as Blue and White leader Benny Gantz’s rejection of their outstretched hand a year ago, when he preferred to join Netanyahu.

They can start by not seeking a “Zionist coalition” (which is laundered Israel-speak for a Jewish coalition with the likes of the not-exactly-Zionist Haredim) and invite the Arab parties into the coalition for real, if they so wish (and hand them the Internal Security portfolio to boot).

But not so fast: that theoretical increase in the Change Camp majority had the Arabs voted with more gusto was largely enabled by Gideon Saar.

Everything else amounted for little more than movement within the blocs.

Governability suffered, if anyone still cares: Likud fell from 36 seats in a bloc of 58 (62% of the bloc) to 30 out of 59 (51%). But in the Change Camp the crystallization was even worse: the largest party, Blue and White, had held 33 of 62 seats (53%), but its breakup left Yesh Atid holding 17 of 59 (28%). That is one reason why so few are confident Yesh Atid leader Yair Lapid will be able to form a government, alongside the other divisions and complications in the Change Camp.

Do these shifts equal what one might expect after the genuine drama of the pandemic?

Netanyahu actually used it to stay in power, persuading Benny Gantz to join him in the only apparent unity government to arise anywhere out of the crisis.

The handling of the crisis was not a success; Israel was among the world leaders in infection rates and reigns as national lockdown champion – with the attendant economic damage – because Netanyahu refused targeted closures that would have upset his Haredi allies. This and other favorizing of the Haredim might have raised secular hackles to the point of animating them off their couches and increasing the rather anemic turnout in places like Tel Aviv.

On the other hand, the vaccination effort, for which Netanyahu deserves some credit, was a stupendous success: Israel leads the world in its apparent  exit from the disaster.

Did all this somehow cancel out? Does anyone pay attention to the situation around them as they go to vote? Is there any hope of breaking the deadlock if there was a fifth election?

One wonders what it would take to significantly move the Jewish vote. A nuclear holocaust? The coming of the Messiah? A miraculous reunion of the Beatles, two of them restored to life and all four permitted finally to enter?

Perhaps when the Netanyahu bribery trial begins in earnest next week, as the mesmerizing details emerge for all the world to hear.

That last notion was, of course, in jest. One must be realistic.