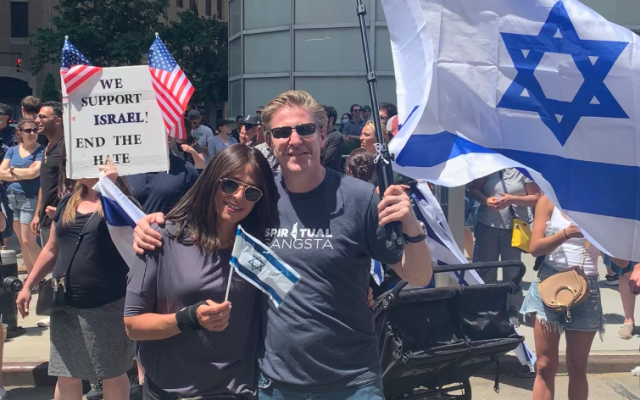 My friend’s son, Joseph Borgen was wearing a light blue knitted yarmulke when he was beaten up in Times Square last week. He was called a “dirty Jew” and thought he was going to die. The attack was cowardly. If you are full of hate, at least let it be a man-to-man fight. This was more like ten to one as pro-Palestinian activists pummeled Joseph and sprayed him with pepper spray. He said he felt like his face was on fire.

Hearing what happened to Joseph and all the others assaulted for simply being Jewish has gotten to me. I’m afraid to let my boys walk around with a yarmulke. They are insisting and I’m proud of them, but I’m torn and also feeling a little hypocritical. People close to me have asked me to wear a cap in public instead of a kipah. The last time I had to do that was when I was in France and I just can’t bring myself to do that here in New York City. So, I’m still wearing my yarmulke in public but carrying my iPhone tripod for protection. Ridiculous, but it makes me feel more secure.

My true salvation though came at yesterday’s rally against anti-Semitism at Ground Zero. Something at the rally really inspired me for the first time since this all started happening. I grew up attending Soviet Jewry rallies, publicly protesting the former Soviet Union’s oppression of our Jewish brothers and sisters behind the iron curtain. Those rallies, besides shining a spotlight on the plight of Soviet Jewry, filled us — the Jews attending those rallies here in New York City — with pride. I was just in my teens, but those rallies had a huge impact on me and my decision to enter the rabbinate. Those protests inspired an entire generation of American Jews to stand tall for our Soviet brethren and not to back down when it comes to standing up to anti-Semitism.

Although yesterday’s rally was not nearly as well attended as it should have been, it gave me that same sense of pride I felt as a high school student. The best part of Sunday’s rally though came after the Star-Spangled Banner and Hatikva were sung and the entire crowd broke out into dance and song. There was a feeling of joy and pride in being Jewish. It felt great to celebrate being Jewish publicly and the difference between our gatherings and those of the pro-Palestinians protests could not have been more dramatic. No spewing words of hate or acts of violence, just peaceful support and love for Israel and the Jewish people, with words of gratitude to the NYPD for their service and protection.

It also felt good to stand up against anti-Semitism. Elisha Wiesel, Eli Wiesel’s son, who addressed the rally, made the point of how the Jewish community spoke out on behalf of the African American and Asian communities when they were threatened, but he said that now it’s time to stand up for ourselves.

The silence of some important politicians and elected officials — as well as the media — is very disturbing, but it’s a wake-up call and a reminder that no one is going to stand up for us if we don’t do it ourselves. We need to follow the example of Israel, who never relies on anyone else for its own defense. They collaborate with others, and of course, are the beneficiaries of support from the United States, but at the end of the day, they only have themselves and God to rely upon. We, Jews of the diaspora are no different. If we don’t take to the streets to protest the anti-Semitism we are seeing, and if we don’t press our elected officials to protect Jews on the streets of New York and elsewhere, no one else will.

Those who claimed they were anti-Zionist but not anti-Semitic have been exposed as liars. The shouts we saw on videos in London were not to rape or kill Israelis, but Jews. The gloves have come off and our enemies want to strike us — Jews — wherever we happen to live. Now is not the time to be quiet. Now is the time to speak out, at least as much for ourselves as we have for others. We are a strong people and have been through much worse. Our enemies have never prevailed over us in the past and they won’t win now but we must be vigilant, we must stand tall, assert our rights and express our pride in being Jewish.

The yarmulke is staying on.