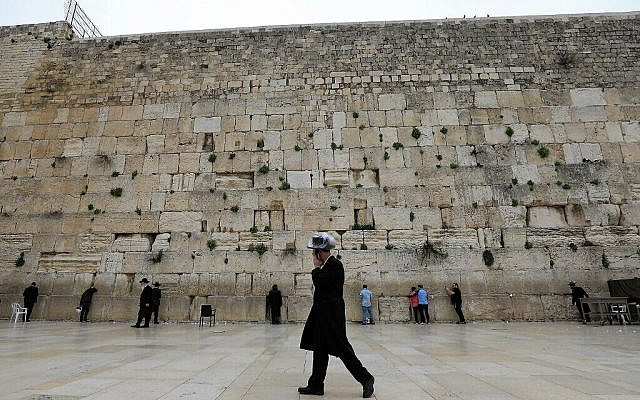 An ultra-Orthodox Jewish man wearing a plastic-covered hat speaks on the phone at the nearly deserted Western Wall in Jerusalem's Old City on March 12, 2020, after Israel announced new restrictions to contain the coronavirus. (Emmanuel Dunand/AFP)

It is hard to describe how furious I was to read about the refusal of many Haredi (ultra-Orthodox) leaders to close down their educational institutions as part of the new coronavirus guidelines issued by Prime Minister Netanyahu on Saturday night. Apparently, there is ZERO upside to having a Haredi health minister (unless, of course, you’re a pedophile from his community).

Then the news broke of a compromise, the Deal of the Century, no doubt: famously overcrowded Haredi schools and yeshivot would promise not to have more than 10 people in any classroom. Well, I’m sure that commitment will be honored.

But I soon realized that, while it may be convenient for me, as part of the national religious/ Modern Orthodox camp, to criticize Haredim, my hometown synagogue is no better. Here’s the official notification from that august institution, via WhatsApp:

2:27 PM: We need volunteers to arrange minyanim at different times. We can hold two minyanim in parallel, using the hall downstairs.

2:36 PM: At this point, we won’t split up the minyanim. If there are too many men, we will split into smaller minyanim, using the hall downstairs.

Minyan, or quorum, is a group of 10 men. Ten, as you might have heard, is now the limit of any public gathering in Israel. If nine men (and I do mean “men”) show up, it’s not considered public prayer. If 11 show up, they are violating the Health Ministry rules. And if there’s a revolving door for multiple minyanim, that would seem to pose the greatest public health threat of all.

The worst part of it, obviously, is the danger to the health of the public, especially the elderly and immunosuppressed. That’s not some modernishe Western value, Heaven forfend — that is a Torah value. A binding command, in fact. Public prayer is nice, so is public Torah study, but the inherent mitzvot may be accomplished very well in the privacy of one’s home!

Don’t take my word for it. Here’s the Mishna, from Avot (Ethics of the Fathers) 3:6:

Rabbi Halafta ben Dosa of Kefar Hanania said: When 10 sit together and occupy themselves with Torah, the Divine Presence abides among them, as it is said: “God stands in the congregation of God” (Psalm 82:1).

How do we know that even five? As it is said: “This band of His He has established on earth” (Amos 9:6).

How do we know that even two? As it is said: “Then they that fear the Lord spoke one with another, and the Lord hearkened, and heard” (Malachi 3:16).

How do we know that even one? As it is said: “In every place where I cause my name to be mentioned I will come unto you and bless you” (Exodus 20:20).

Or go back even further, to Hillel the Elder (Tosefta, Sukka 4:3):

This is a Divine promise: if we go to the study hall and synagogue when we can, God will come to us when we are at home. That is where I will be, with my family and with my God. So, sanctimonious rabbis of today, tell me this: Do you think you are smarter than Hillel?