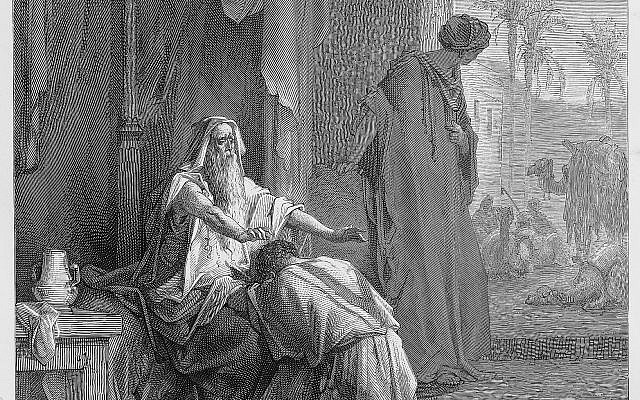 And Rebekah spoke unto Jacob, her son, saying: “Behold, I heard thy father speak unto Esau thy brother, saying: Bring me venison, and make me savoury food, that I may eat, and bless thee before the Eternal before my death. Now, therefore, my son, hearken to my voice according to that which I command thee. Go now to the flock, and fetch me from thence two good kids of the goats; and I will make them savoury food for thy father, such as he loveth; and thou shalt bring it to thy father, that he may eat, so that he may bless thee before his death.” My father perchance will feel me, and I shall seem to him as a mocker; and I shall bring a curse upon me, and not a blessing.’ And Jacob said to Rebekah his mother: “Behold, Esau my brother is a hairy man, and I am a smooth man.” (Genesis 27:6-12)

This Torah portion presents many difficult questions. According to tradition, our patriarchs and matriarchs were the most righteous of people. What are we to make of Rebecca’s conspiring with Jacob to deceive her husband—Jacob’s father—Isaac in order to steal the blessing intended for her other son, Esau? Moreover, according to Kabbalah, Jacob was the embodiment and personification of the sefirah of Tiferet, which signifies beauty, mercy, harmony, and truth. We might have expected a man who personifies the category of truth to recoil from his mother’s proposal to deceive his father. However, he raises no moral objections to her suggestion. Jacob’s only objection is that he may get caught in the act and get the opposite of a blessing. At first blush, this appears to be not a conscientious objector position, but one of a coward. How are we to understand this very troubling account?

The questions do not stop here. When Jacob comes to his father, Isaac, impersonating Esau, the Torah records the following dialog:

And he came unto his father, and said: “My father”; and he said: “Here am I; who art thou, my son?” And Jacob said unto his father: “I am Esau thy first-born; I have done according as thou have spoken to me. Arise, I pray thee, sit and eat of my venison, that thy soul may bless me.” (Genesis 27:18-19)

Commenting on this account of Jacob’s apparent deception, Rashi states, “I am…Esau…your firstborn: [He meant]: I am the one who is bringing you [food], and Esau is your firstborn.” Rashi is the foremost classical commentator. Is Rashi trying to justify Jacob’s lie by saying that, technically, Jacob did not lie? According to Rashi, first Jacob said “I am,” meaning “I am the one who brings you the food;” and then Jacob added, “Esau is thy first-born”—both are factually accurate statements. This sounds very Clintonesque. Whom was Rashi kidding?

An additional puzzle comes as the hoax is uncovered. Here is the dialog between Esau and his father, Isaac:

And Isaac trembled very exceedingly, and said: “Who then is he that hath taken venison, and brought it me, and I have eaten of all before thou camest, and have blessed him? Yea, and he shall be blessed.” (Genesis 27:33)

Upon realizing that Jacob tricked him by impersonating Esau, why didn’t Isaac revoke his blessing, but instead reaffirmed them—“Yea, and he shall be blessed”?

Many a commentator struggled with these questions. Interested readers are directed to read classical Torah commentaries[1] for various proposed explanations. Here is how this troubling narrative can be read through the prism of quantum physics.

As I discussed in my earlier essay, “The Entangled Twins,” Jacob and Esau were “entangled” as twin brothers.[2] Just as two entangled particles in quantum mechanics represent a single system described by a single wave function, twin brothers are also a single system called “twins.” As also discussed in “The Entangled Twins,” they shared a symmetry, such that the brothers are “interchangeable”—if we were to swap them, the sum-total would be the same. As mentioned, this symmetry allows Jacob to present himself instead of his brother, Esau.

But let us start with Rebecca—the mastermind of this intrigue. When pregnant, Rebecca received a prophecy:

And the Eternal said unto her: Two nations are in thy womb, and two peoples shall be separated from thy bowels; and the one people shall be stronger than the other people; and the elder shall serve the younger. (Genesis 25:23)

Rebecca feared that Isaac, unaware of this prophecy, would put Esau above Jacob (as, indeed, Isaac intended to do when he put Jacob the lord over his brother, thinking that he was blessing Esau). She knew that Esau, a wild man who spent his days hunting animals and chasing women, was not suited for such a leadership role. Esau had big potential, which Isaac saw and wanted to harness. However, Rebecca knew from the prophecy she received that this potential would not be realized until the end of days. She knew that it was Esau who was destined to serve Jacob.

Rebecca felt justified in masterminding the ruse as carrying out God’s will, to which she was privy, but her husband was not. From her perspective, she was not encouraging Jacob to steal his father’s blessing; she was merely steering Isaac’s blessing in the right direction. Moreover, intuitively sensing that two brothers were “entangled,” she did not see anything wrong with substituting one twin brother for another, knowing that, as an entangled pair, they will both get the father’s blessing. However, the one receiving the blessing would be put ahead of the other brother—which was her objective in carrying out God’s will.

Jacob did not object to this ruse on moral grounds for the same reason—he was happy to receive his father’s blessings on behalf of himself and his brother. His mother must have told him of his destiny as the future head of the family, which may be why Jacob bought the birthright from his older brother.

What was Jacob’s fear? He knew his father was blind. He expected that when he brings food to his father, Isaac would see a son but know not which son (which was indeed what happened). Thus, in the blurry vision of Isaac, that unidentified son would be, as it were, in a superposition of two “states”—Esau and Jacob. Jacob feared that, if his father touched him, his father would “collapse the wave function” (any measurement or observation collapses the wave function), collapsing the state of superposition to a single state. Isaac would realize that it was Jacob who stood in front of him. That might elicit the opposite of blessing, Jacob feared.

However, as Jacob expected, Isaac wanted to touch him. Rebecca’s trick of covering Jacob’s hand with goat’s skins worked, and Isaac did not recognize Jacob. But Isaac intuitively sensed the presence of both sons in the room, as he said: “

The voice is the voice of Jacob, but the hands are the hands of Esau. (Genesis 27:22)

Thus, Isaac acknowledged the “entanglement” of the twin-brothers, as it were. As Rebecca expected, Isaac put the son in front of him above his brother. However, instead of Esau, it was now Jacob who was put in the leadership position.

We can now also understand the dialog between Isaac and Esau, when Isaac realizes the ruse but reaffirms his blessing to Jacob all the same: “Yea, and he shall be blessed.” Isaac may have intuitive realized that, by touching Jacob, he had “collapsed” the wave function (as Jacob expected), as it were. There was no going back. Once he appointed Jacob as the head of the family, it could not be undone—one cannot un-collapse the wave function.

As we see, the logic of quantum mechanics sheds new light on this biblical narrative, not only explaining difficult verses, but also Rashi’s commentary that otherwise might appear disingenuous.

Does it mean that Isaac, Rebbeca, and Jacob knew about the superposition of states, entanglement, or the collapse of the wave function? Of course not! These terms were not in their vocabulary, and the formalism of quantum mechanics would not be developed for another four thousand years. Besides, we use these terms metaphorically in any event. However, it may mean that they intuitively followed Torah’s inner logic, which is compatible and structurally parallel with the logic of quantum mechanics.

[1] The most comprehensive collection of classical biblical commentaries is found in the Mikraot Gedolot, that is, “Great Scriptures,” sometimes referred to in English as the “Rabbinic Bible,” is the Biblical text with classical Rabbinic commentaries of Targum Jonathan, Targum Yerushalmi, Rashbam, Tosafot, Or Hachaim, ibn Ezra, Rada”k, Nachmanides, Gersonides, Ba’al Haturim, Sforno, Siftei Chakhamim, The Bratinura, Kli Yakar, Abrabanel, and Joseph Kara.

[2] In this context, we use the quantum-mechanical term, “entangled,” metaphorically. However, it is possible to construct a conceptual Hilbert space where twin brothers would be described by a single wave function and, therefore, entangled in the literal sense.