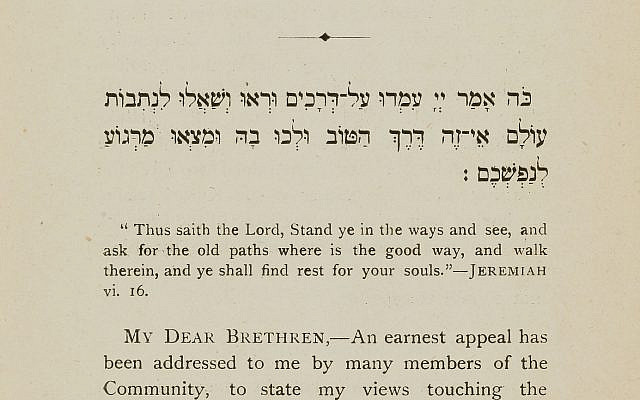 Now that the Jewish festivities are over, I’ve picked up my pen again, or rather hit the keyboard, and resumed my series of blogs on the various religious controversies which have been such a feature of Anglo-Jewish history. The Jewish life of this great island has not been without drama. Liberal Judaism, and its relationship with the Chief Rabbinate, is one such story.

In my previous piece, I mentioned how the development of a modus vivendi between Orthodox and Reform Judaism may have been aided by the founding of Liberal Judaism, an even more radical movement. 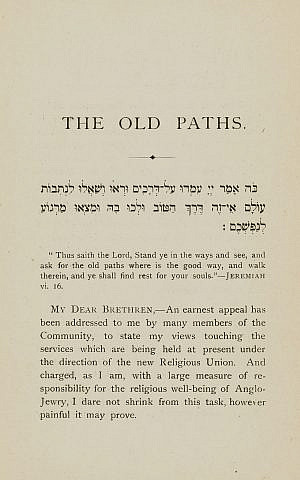 The movement of Liberal Judaism was founded by Claude Montefiore and Lily Montagu at the beginning of the twentieth century. Ironically, Claude Montefiore’s family were some of the more devout and Orthodox amongst Anglo Jewry. Montefiore was the great nephew of Sir Moses Montefiore, who was Orthodox and virulently criticised Reform Judaism. Lily Montagu was the daughter of Samuel Montagu, 1st Baron Swaythling, who had founded the Federation of Synagogues to cater for those for whom the United Synagogue was not religious enough.

Despite the impressive antecedents of its founders, Liberal Judaism was attacked by Chief Rabbi Hermann Adler in his sermon “The Old Paths” preached in 1902 (illustrated), a copy of which is in my collection. 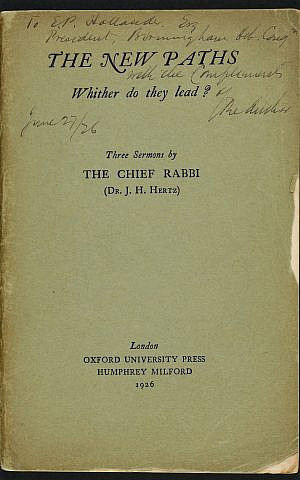 A copy of Chief Rabbi J H Hertz’s (1872-1946) collection of three sermons against the reforming movements of Judaism, entitled “The New Paths: Wither do they Lead”, printed in 1926

Almost 25 years later, his successor, Chief Rabbi Hertz, was even more virulent in his series of sermons against the reforming movement. He entitled his sermons, “The New Paths: Wither do they Lead.’ (illustrated). Hertz attacked Claude Montefiore’s view that Judaism must come to terms with the Gospels, and quipped, “whensoever Jews have come to terms with the Gospels… open apostasy… has been the result.” Similarly, Chief Rabbi Hertz ridiculed the statement of the Chicago Liberal Jewish minister, Emil Hirsch (whose Sabbath services took place on Sunday), who said, “I am the only good Jew among the Chicago rabbonim… I close on Shabbos!”

In view of all these condemning sermons, it is not surprising that neither Adler nor Hertz allowed Liberal ministers to join the Union of Anglo Jewish Ministers, although they did admit Reform Ministers. This disparity led the then Chief Rabbi of Ireland Rabbi Isaac Herzog (later Chief Rabbi of Israel and grandfather and namesake of Israel’s current President) to refuse to join the organisation since he felt this was “tacitly recognising the principles and teaching” of Reform Judaism as more valid than Liberal Judaism (illustrated). 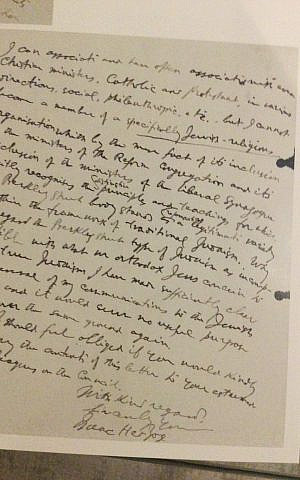 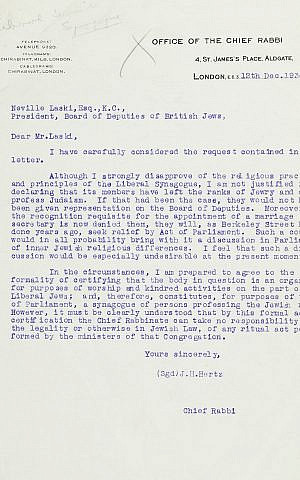 A 1934 letter from of Chief Rabbi J H Hertz to Neville Laski, President of the Board of Deputies of British Jews stating that, in the circumstances, the Liberal synagogue should be recognised by Parliament as “a synagogue of persons professing the Jewish religion”

Despite all these controversies, in 1934, Chief Rabbi Hertz did certify the Liberal Synagogue as “a synagogue of persons professing the Jewish religion,” allowing weddings celebrated there to be accepted as valid by the civil authorities. Hertz did this despite the fact that he “strongly disapproved of the religious practices and principles of the Liberal synagogue.” The letter he penned on the issue (illustrated) makes it clear that he did so only due to the pressures and conditions of the time, the dark clouds of World War II.

So, perhaps the Nazi persecution of all Jews (whether Orthodox, Reform or Liberal) inadvertently led to today’s modus vivendi between Orthodoxy, Reform and Liberal movements.