As we have seen in our previous blog pieces, in the 18th and early 19th century, the British chief rabbinate was attacked for not being totally adherent to Orthodox Judaism. All those colourful controversies accused the chief rabbis in question of not being frum enough, of not preparing a Get properly, say, or for endorsing a book of questionable theology. The pious and Orthodox continuously questioned the chief rabbi. Yet the thrust of these controversies was about to take a turn. The nascent Reform movement on these shores was about to make a punch at Rabbi Solomon Hirschell (1762-1842), the final controversy of his life.

On 15 April 1840, the West London Synagogue of British Jews or, in Hebrew Kahal Kadosh Sha’ar Tziyon (“The Holy Congregation, the Gates of Zion”), was established. The founding members were several prominent families dissatisfied with both the Sephardic Bevis Marks Synagogue and the Ashkenazic Great Synagogue of London.

It has been suggested that their prime aim was to create a synagogue further to the West than the existing synagogues, nearer to where they lived. Although there may be an element of truth in that interpretation, yet there was also a clear theological dispute between this new West London congregation and the other London synagogues. The West London Synagogue was the first Reform synagogue in the UK. Their establishment sparked a controversy which still reverberates today. Both sides published pamphlets entitled “Is the Oral Law of Divine Origin and therefore Binding on the Jews”. 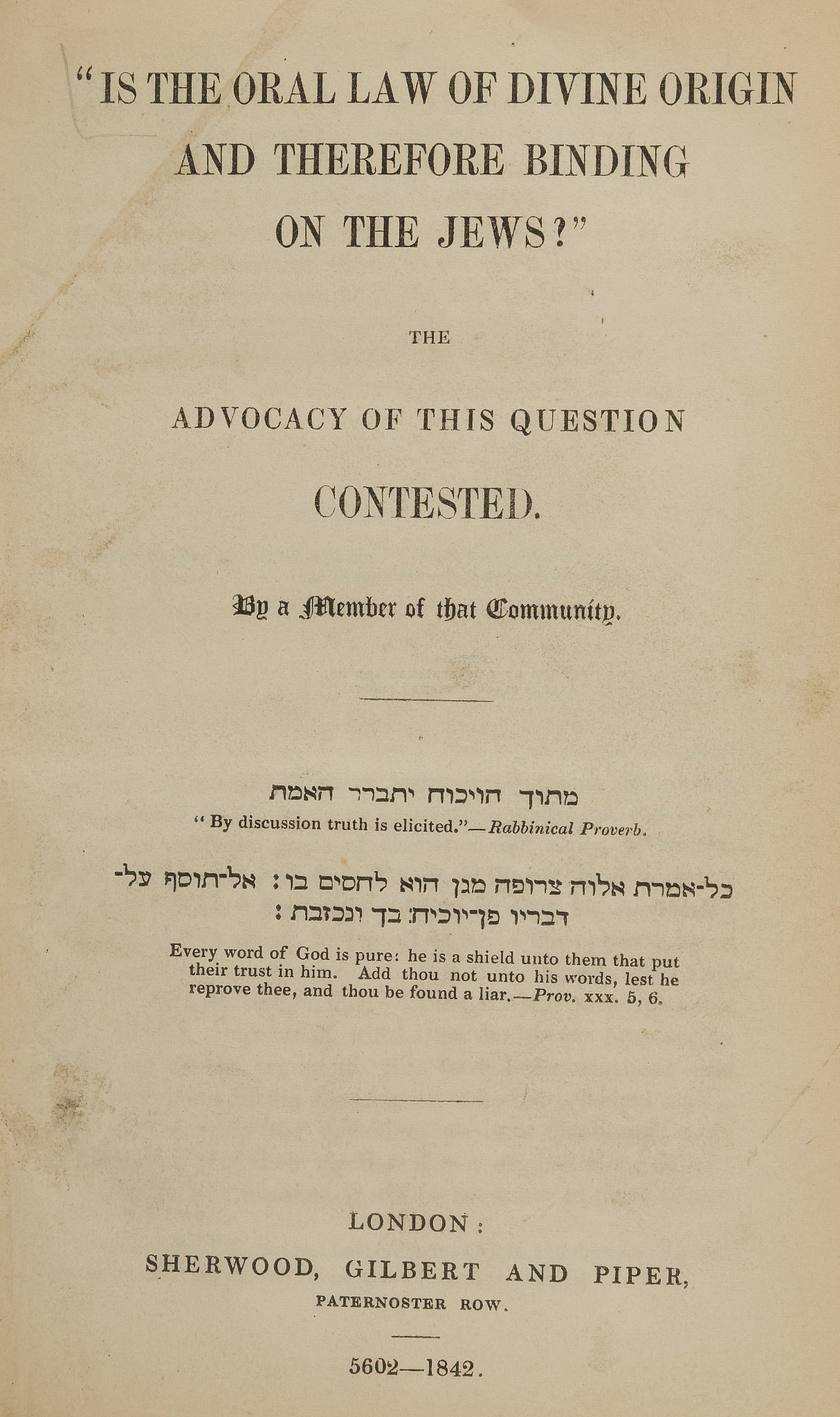 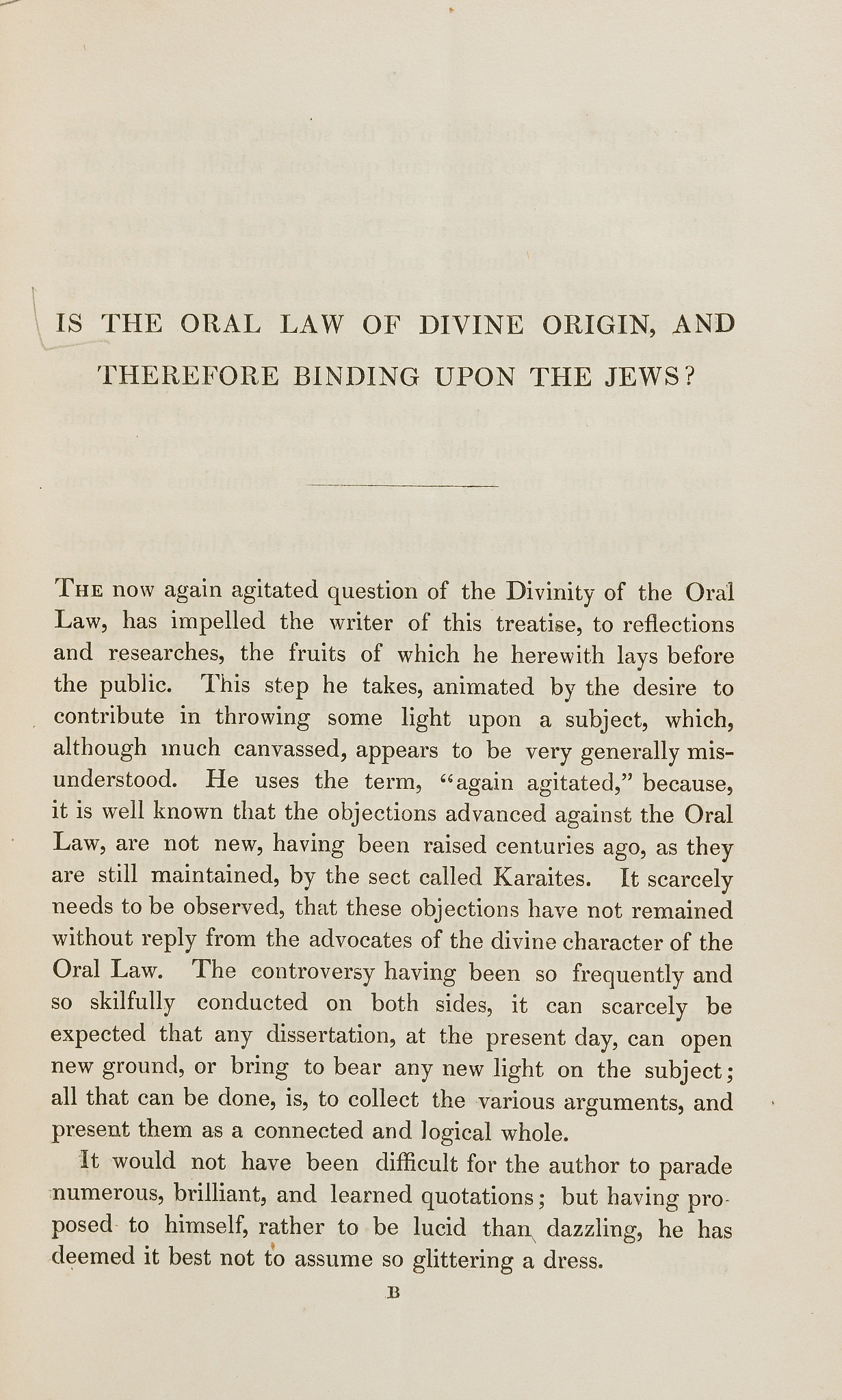 The aged Solomon Hirschell, together with the Sephardic senior rabbi and the dayanim, resoundingly placed these “reformers” in cherem (excommunication). This ecclesiastical excommunication notice proclaimed that the reformers “do not believe in the authority of the Oral Law and cannot be permitted to have any communion with us Israelites in any religious rite”. It was the last controversy of Hirschell’s life. 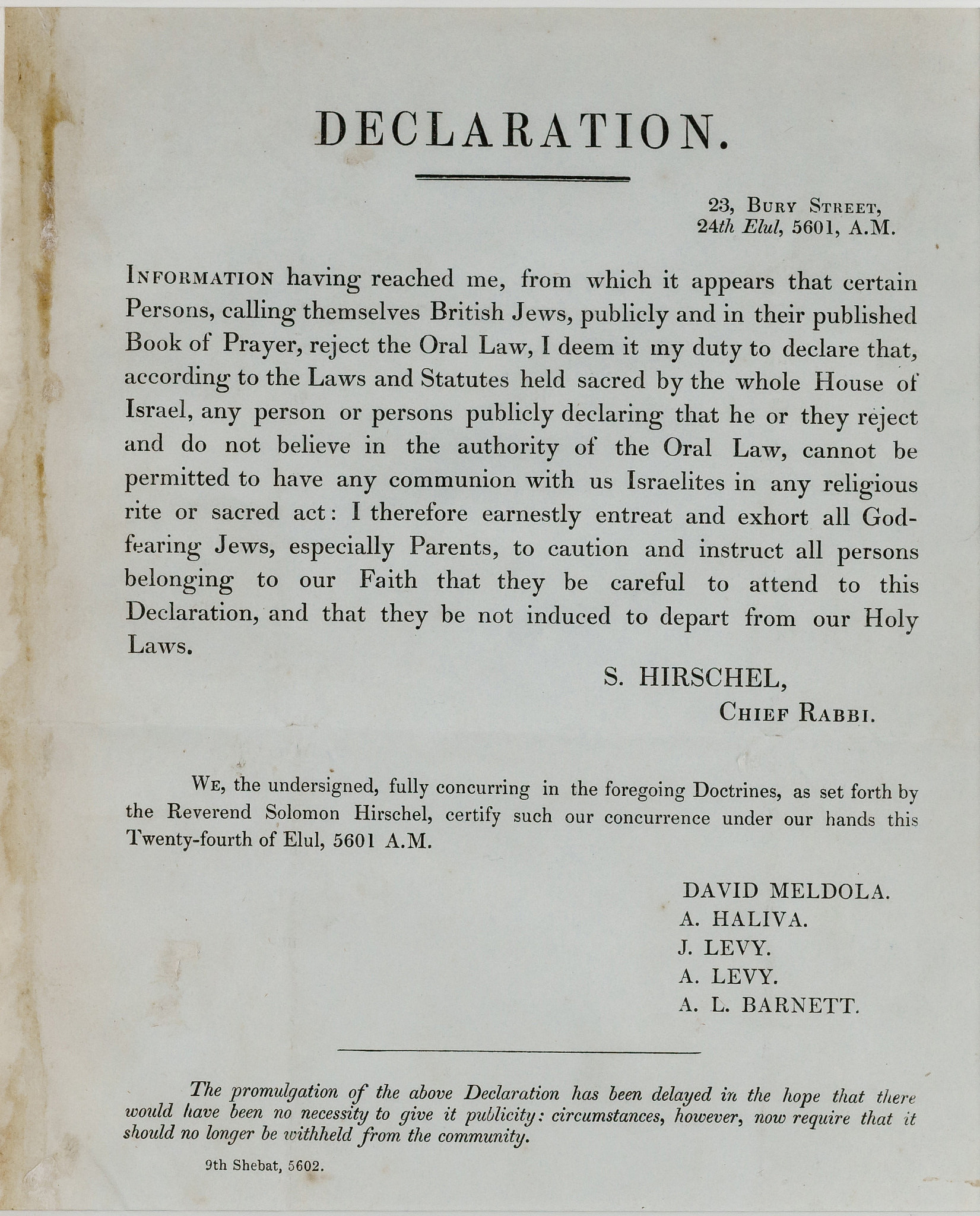 Yet, the dispute did not die with him. His successor, Chief Rabbi Nathan Marcus Adler, was no more accommodating to the views of the West London Synagogue, especially in the early years of his office. West London members told the story, for example, that Rabbi Adler only allowed women from the Reform synagogue to marry an Orthodox man under his auspices if they promised to never again attend the West London synagogue.

Ultimately however a modus vivendi and informal agreement was reached, the West London synagogue was tacitly allowed to veer on its own path. This may have been due to the rise of the even more radical Liberal Jewish movement in the UK, propping itself up as a much more pressing target for the Orthodox (as we must discuss in a future post). It is also likely that external pressures also played a part in bringing the community together. Thus, later, at the time of the Nazi regime in Germany, Chief Rabbi Hertz spoke at the opening of a new hall at the very same West London synagogue, an Orthodox Rabbi speaking and celebrating at a Reform shul! In his address, he preached the need for communal unity. 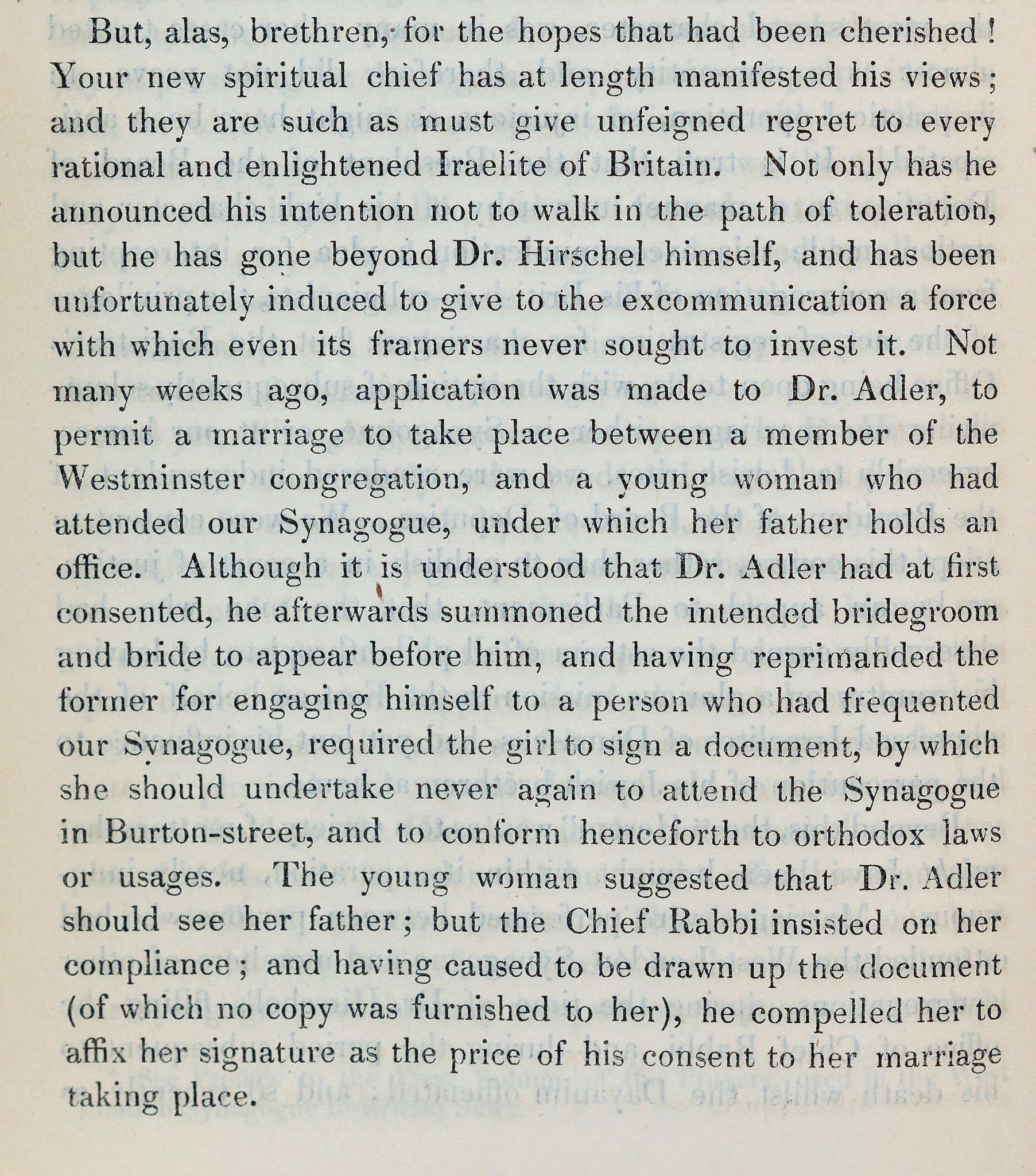 Since the time of Hirschell, the fault-lines of this theological dispute between Orthodoxy and Reform in the UK nevertheless continues to resurface and bubble at times. When the Reform Rabbi Hugo Gryn died in 1996, the then Chief Rabbi Lord Sacks had to defend himself from both fronts. The Reform movement criticised him for not attending his funeral and the Orthodox attacked him for attending and speaking at his memorial service. Controversies seem to be a staple of the Anglo-Jewish rabbinic life, from the 18th Century until our times.