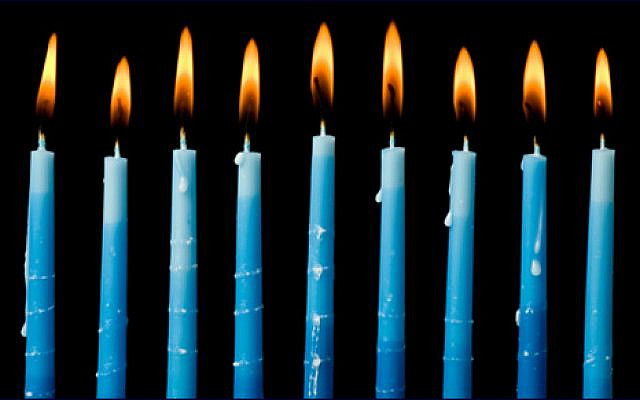 As the festival of lights nears, I think of my dad.

He passed away on the 20th of Kislev, and Hanukkah begins just five days later.

A yahrzeit candle burns on my kitchen counter, the soft glow a comfort, its flame kindling memories of my dad, and me.

I sense his abiding presence, even as I still grieve his absence. And I think about how life spools out as a continuing story, connecting us to those who came before and those who come after. And how the stories we tell and retell, the holidays we share, the rituals we observe, are the stuff that forges those precious connections.

And so the Hanukkah story resonates; the triumph of a small band of soldiers over many; the miracle of a vial of oil burning for eight days; the redemption of an ancient faith despite efforts to diminish or destroy it. The celebration of the victory; the ritual lighting of candles for eight nights to recall it.

It is the story, relived again and again in our history, a tiny minority of observant Jews living among a much larger gentile population, in this case the Seleucids, who seek to dominate them, first by enticing them to take on their worldly values and beliefs, later by prohibiting sacred Jewish practice and desecrating their most holy place, the temple.

A revolt ensues, the Jews prevail, and the story, with nary a mention in the Torah, appears centuries later as a short account in the Talmud.

And the faith and dedication that it takes, even now, especially now, to do that, as social and cultural forces ease that conflation, as identities merge and differences lessen, as our understandings of self expand with multiple facets, multiple permutations, even as they shift religiously towards the NONES of the Pew study of American religion, where religious identity is determined solely by self definition.

And I think of my father, of his struggle to gain a toehold in America as anti Semitism threatened to close off opportunities, but as he and my mother held fast to the Judaism of their past and found new and meaningful ways to be fiercely Jewish and to be proudly American. And they passed those on to their children.

And so their story became my story, and that story became my children’s and theirs. A story of dedication, but also a story of growth and change, a retelling that is enriched with new choices, new experiences and new perspectives.

It may not be the story of the Maccabees, nor the story my parents told me, nor the story we told our children, nor the story they will tell theirs. But it is a story that continues to resonate with its capacity to inform our actions and behaviors, a story imbued with values of family, of commitment, of obligation. A story not necessarily told, but simply acted upon in their everyday lives, for us to observe, to model.

There are times when I regret the questions I did not ask,
the answers I did not hear, the stories my father did not tell me.

And, yet, perhaps he did not have to tell.
They were there all the time for me to see.