Tamar Yael, CEO of Hoshen with her son at a Tel Aviv rally in support of the transgender community, held in Summer 2019. Credit: Adam Kaplan

With our lives on a big pause button in many ways, we can only begin to wonder who we are going to be when we come out of this pandemic, when eventually we do get to the other side. The plot in our story has been upended, and everyone is navigating in an entirely new landscape. As always, stories can help us get through these anxious times.

Whether it’s our children’s bedtime stories, news features, biographies of our heroes- all of this can help us find vast expanses of beauty, humor, courage and compassion from within our confined quarters. 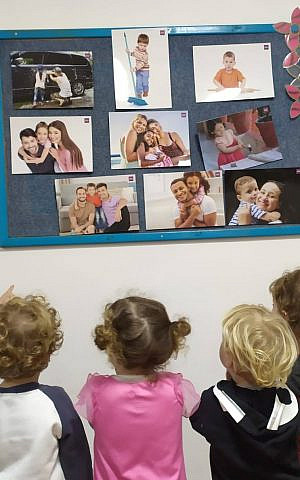 As part of the celebration of ‘Family Day,’ kindergarten children view an exhibit set up by Hoshen, showing the many possibilities of family life. Winter, 2020. Credit: Sari Yerushalmi

In the midst of this unwelcome interruption in our lives, many of us our taking stock, reassessing how we fit into the narrative that we have created for ourselves. I find myself going back to the many stories that I heard before we were hit by this tidal wave, when I listened to LGBTQ activists share revelatory moments in their lives that shifted everything for them. Stories about transitional moments in people’s lives seem to be of particular relevance these days.

A lifetime ago (actually February, to be precise), I joined several workshops at a local high school offered by Hoshen, a nonprofit that educates the wider population about the LGBTQ community in Israel. At these workshops, which prior to the shutdown had been held weekly, teenagers heard from volunteers who came to share their ‘coming out’ story. It was classic storytelling, with the classroom as the proverbial campfire.

Storytelling workshops offered by Hoshen take place in over 350 different institutions, mostly schools. Over 2,000 workshops for students and teachers are held each year with approximately 60,000 individuals taking part. Spring, 2017. Courtesy of Hoshen.

Years before storytelling evenings and workshops became a cultural phenomenon, Hoshen (the acronym for ‘Education for Change’ in Hebrew) had been using the power of storytelling to create more acceptance towards the LGBTQ community. Thousands of volunteers had fanned out all over the country, sharing their life experiences with high school students and teachers, university students, police officers, soldiers, medical staff, social workers and more.

The model for Hoshen’s work goes back to 1976 when the Association for LGBTQ Equality in Israel (the Aguda in Hebrew) established lecturing services as part of their efforts to raise awareness. The demand for educational workshops on the LGBTQ community continued to grow over time, and Hoshen eventually was established as an independent NGO in 2004.

Hundreds of kindergarten and elementary school teachers are trained each year, as seen above in a training offered by Lee Reuveni Bar David. The workshops for professional educators address topics such as how to avoid gender stereotyping and how to accommodate diverse family structures. Winter, 2016. Courtesy of Hoshen.

As its current CEO, Tamar Yael explained in a recent phone call, Hoshen volunteers are especially looking forward to resuming their storytelling workshops with high school students, a key piece of Hoshen’s educational work in the field. And what an act of generosity it is on their part- to share publicly with those on the cusp of so many decisions what has been learned from their own life’s experiences.

We already know that hearing personal stories about sexual orientation and gender identity can create more openness. Research backs this up, pointing to its singular effectiveness in reaching teenagers and helping to reduce stereotypes about the LGBTQ community. A person standing before you, sharing their personal story, is one of the most powerful ways to nurture tolerance and understanding.

And now, as I now read over my notes from those Hoshen workshops a few months ago, I am thinking of these truth tellers who stood before us, sharing a particular moment in their lives when they recalibrated everything. We were essentially given a front row seat to how individuals live their own truth, allowing us insights into the art of what it means to become yourself.

As each of the speakers explained that day, a time came when they were no longer willing to play out their stories as expected. Each of them, in some way or another, had the strength to stop everything in the middle, to pull a brake in their narrative midstream.

Hoshen volunteers from the Northern region of Israel who have all undergone storytelling training, have an evening get-together. The creation of local networks of volunteers who maintain communal ties plays a role in Hoshen’s national outreach. Fall 2017, Courtesy of Hoshen.

During the various storytelling sessions with Hoshen volunteers, I remember how things shifted in the classroom once the stories built momentum. Even the most sullen, languid teens – who early on had seemed entirely uncomfortable with the whole idea of a LGBTQ awareness workshop – began leaning forward in their seats, avidly listening, no longer averting their eyes.

Just as time was running out the speakers would be peppered with questions: What happened when you told your kids? Even if your father didn’t attend your wedding did you ever reconcile with him?; Did you get to tell your grandmother before she died? Awkwardness had melted away by then. Everyone seemed on board for the journey, cheering on the heroes of the story.

It’s not a surprise – this is what happens with a well-told story. The power of stories is often in their multiple ‘entry points’, those opportunities where audiences can easily relate and find themselves in the narrative. We can’t help but root for the protagonist. The immediacy of it seems too real, and compassion for the storyteller becomes instinctual. There is something so very raw about hearing firsthand the cost of intolerance on a personal level. Or alternatively, there is something so very intimate about hearing of a first kiss. A first love.

Haifa Pride, a parade celebrating the LGBTQ community, is held annually, as part of the international observance of Gay Pride Month. The Tel Aviv Pride is a week-long series of events, and their Pride Parade attracts over 250,000 attendees, making it the largest LGBTQ Parade in Asia in recent years. Summer, 2017, Courtesy of Hoshen. 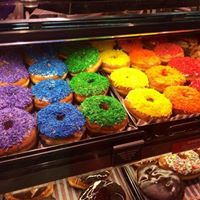 A festive posting on Hoshen’s Facebook during Hanukah, with a celebration of doughnuts that celebrate diversity. Winter, 2015. Courtesy of Hoshen.

And really, when you think about it, so much here is universal. Without hitting the students over the head, the storytellers touched on familiar experiences, regardless of background. I mean, who among us, at some point in our lives, hasn’t felt the emptiness of not being understood? Hasn’t been afraid of being judged, of not fitting in, or feeling unlovable? Hasn’t struggled with how to share more of ourselves when we are worried it is more than people really want to see?

Stories like we heard at the high school that day from members of the LGBTQ community remind us that we can set new parameters for ourselves. Who were we anyways, before everyone else told us who we should be? It is during these uncertain times that stories of reinvention can resonate. We will all have to evolve in some way or another, as we wait and see what these extraordinary circumstances reveal about ourselves.

We can think about how our own stories may unfold, and what will be the memorable moments that may someday cause the audience to lean forward in their seats, waiting to hear how it all turned out.