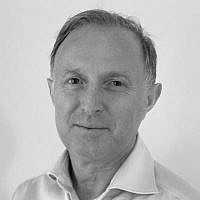 The Blogs
Fred Shahrabani
Apply for a Blog
Advertisement
Please note that the posts on The Blogs are contributed by third parties. The opinions, facts and any media content in them are presented solely by the authors, and neither The Times of Israel nor its partners assume any responsibility for them. Please contact us in case of abuse. In case of abuse,
Report this post.
Barayé is the protest song of the Iranian people, composed by songwriter Shervin Hagipour, who derived its lyrics from the tweets of his fellow countrywomen and men, expressing their collective anguish, aspirations, fears, and love. It may come to be ranked as one of the great protest songs, in the tradition of Blowing in the Wind, Bob Dylan’s 1962 anthem. Like Blowing in the Wind, Barayé’s impact on the collective consciousness of his people has been sudden, explosive, immediate. Within a mere day or two from first being uploaded to Instagram in late September, Shervin was arrested, and his song pulled off Instagram. Yet it gained 40,000,000 views in that short span of time, and it is now being sung by people all across Iran, from Tehran’s conflict-ridden streets to the nation’s most remote towns and villages. The power of the song is such, that barely two weeks from entering the public sphere, one would be hard put to find an Iranian anywhere in the world who is not acquainted with it.

The lyrics are not confrontational. Barayé means “for” or “for the sake of” in Farsi, and Shervin sings it to everyone — oppressed and oppressor, parent and child, man and woman. The lyrics address the collective heart of a nation, questioning what sense there is to stand in violent suppression of the other, when the other, claims the song, is oneself.

Yet, how, in this orgasm of killing, can the song be for the innocent, and also for the predator? That rare quality lies in the song’s ability to find common ground and common purpose. Within the lyrics of the song the oppressor and the oppressed share the same non-political stage—the same polluted air, the same fatigue of toiling in a command economy, a deep hope for normalcy and well-being, the awareness of their own poverty and its shame, the same tranquilizers and insomnia pills. All these ideas and images powerfully drive Shervin’s lyrics.

The regime, of course, continues to issue its threats, proclamations, and pompous denunciations. And the brutality on the streets rages on. Yet the ubiquity of the protests, the general malaise from which Barayé emerged, the unnerving youthfulness of the protestors, have made it eminently more difficult to camouflage the violence with notions of Destiny, Religion, Flag, Faith, or Nation-state.

In situations where there is such a marked disparity in the possession and execution of lethal force, songs, chants, and slogans are an empowering and unifying force on the streets. Conjointly, Barayé seductively, subversively, contributes to the unease and uncertainty in the authority’s ranks.

Each protestor clubbed on the head or the chest or the legs, is a verse of that song, a song whose evident truths have breached the walls of the Islamic Republic’s defenders. For the images and ideas it contains, whether the “withered trees on Vali’asr “(a street in Tehran), or the “unending tears”, or “the poverty and shame” or, the deep concern for the Piruz’s (Persian Cheetah) extinction, or reference to a nine year old girl who perished in a passenger plane shot down by the Revolutionary Guards, are non-partisan and common to the entire population. As such, the song’s lyrics are an overture for the legitimacy of the population’s grievances. It asks each Revolutionary Guard and Basij to consider the ethical dimension and not only the ideological one. This, in and of itself, is a remarkable achievement.

Presently, given the murderous and barbaric response of the security forces, it is difficult to envision an end to the violence. However, the uprising, by its very continuation, from one day to the next, is self-strengthened; new and unexpected factors, random or otherwise arise; the steadfastness of the protestors becomes its own force multiplier. This song is but one example.

Shervin Hagipour composed his remarkable song from the essential cry of his own people. Barayé is now one of the battle cries of the protesters, who must endure beyond the spiraling death count, the aggravated threats, and the Stasi-like intimidation. And yet, this song clearly touches the universal. Within its lyrics, it contains many of our own existential battles: the struggle for personal freedom, women’s liberation, environmental healing, escape from poverty, concern for the Other, Peace.

The song attains its climax with the line “barayé een beheshté ejbari,” for this forced heaven. The juxtaposition makes it all the more clear: forcing you into someone else’s heaven, that heaven you are forbidden to leave, is the hell in which you live.

And for each line of the lyrics, plucked by Shervin from the ephemeral world of lost tweets, one wonders which brave or frightened soul wrote it, who they are, what their circumstances may be. Do they endure? Will they survive?

Clearly a people’s song cannot be clubbed to death, but could its people be clubbed into submission? The answer–my friend– is surely not blowing in the wind. It lies in the will to freedom of the brave women, men, and children of Iran. It is the responsibility of the international community to lend its hand in full practical  support of this imprisoned people.

The capitalized word in each line is the final word of that line in the original Farsi. The transliteration of that word is given in parentheses following each line. In that way the reader may wish to follow the general a/a/b/a rhyming scheme of the lyrics. Where possible the translation follows the word sequence of the original Farsi.

Shervin Hagipour singing Barayé:  If watching the video, note the tweets connected to each of the song’s lines.

Barayé (for, for the sake of)

For in the streets Dancing (Raghseedan)

For my sister, your sister, Our Sisters (Khauharaumoon)

For change in the minds that are Rotting (Pouseedan)

For the embarrassment, For the Poverty (BeePooly)

For longing a life of Normalcy (Ma’mooly)

For this Command economy (Dastoory)

For this Polluted air (Auloodé)

For the dogs sinless and Forbidden (Mamnoo’é)

For the weeping Unceasing (Beevaghfé)

For the image and the repetition of this Moment* (Lahzé)

For the face that is Laughing (Meekhandé)

For the students, for the Future (Ayandé)

For this Forced heaven (Ejbary)

For the Imprisoned intellects (Zendany)

For the Afghani children (Afghany)

For all these slogans plain Empty (Too-Khaly)

For the collapse of houses Flimsy (Pooshaly)

For the sensations of Calmness (Aramesh)

For the sun after nights so Lengthy (Toulany)

For tranquilizers and Sleeplessness pills (Beekhaby)

For the girl who wished she Was a boy (Bood)

* “For the image and the repetition of this Moment”—From tweet by Hamid Esmailian with a pic of himself and his daughter sitting side by side, reading. The 9 year old child was killed when passenger plane PS752 was shot down by the Islamic Republic upon taking off from Mehrabad airport in Tehran.

About the Author
Fred was raised and educated in Tehran. He hails from a family of Iraqi Jews who fled Iraq, and subsequently, in the wake of the the 1979 Islamic Revolution, fled Iran. His parents spent formative years in Israel. As Arab Jews and Zionists who experienced the generosity of Moslem culture, and in particular the high spirit, hospitality, and graciousness afforded them in Iran, his perspective is formed by many of the historic events that engulfed the region.
Related Topics
Related Posts