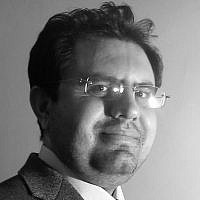 The Blogs
Ahmad Hashemi
Apply for a Blog
Please note that the posts on The Blogs are contributed by third parties. The opinions, facts and any media content in them are presented solely by the authors, and neither The Times of Israel nor its partners assume any responsibility for them. Please contact us in case of abuse. In case of abuse,
Report this post.

Inspired by the democratic movements all across the Greater Middle East region, known as the “Arab Spring,” the Syrians, though cautiously at the beginning, took to the streets demanding further political and social reforms and greater freedoms. Launched in March 2011, the Syrian uprising was a first major sign of popular resentment against the authoritarian Ba’ath party rule since the bloody clampdown on a revolt back in 1982 in Hama.

With the escalation of the civil casualties turning into a human tragedy of the uprising, few countries and organizations, including Russia, Iran and its proxy Hezbollah, could afford to remain indifferent in what was happening inside Syria. Even Tehran’s mercenaries such as Hamas sided with the Syrian opposition. Having nothing to lose itself, Iran burned the credit of its ally Hezbollah – gained after Israeli forces retreated from southern Lebanon and strengthened by the 33-day war with Israel in 2006 – and severely damaged the reputation and popularity of the so-called resistance front.

Tehran put Assad as well as his comrades from the Alawite sect at great risk because after the inevitable demise of the Baath party dictatorship, this minority will suffer the most and will be forced to leave the post-Assad Syria or at least to flee retaliation by the Sunni majority and take shelter in the Alawite stronghold of the coastal mountainous areas along the Mediterranean shore, with its major provincial towns of Lattakia and Tartus. There, they will need to accept the reality of – and find a way to live within – the eventual framework of a most-likely secular, democratic and Sunni-dominated political system.

As a politician who inherited power from his father, Bashar Assad was smart enough to understand the consequences of the critical situation he was facing in order to act properly. If not for Iran’s temptation, influence, persuasion as well as its all-out support, the regime in Damascus would most probably have compromised on a mutually agreeable solution with the opposition to bring about more liberties and to expedite reforms to stifle the public anger, instead of defying and insisting on further bloodshed.

Iran seems unwilling to allow Assad to even think of a possibility of any concession whatsoever. Therefore, if no quick and effective step is taken by the world community, the worst is still ahead and the regime in Tehran, through providing both chemical weapons and its death technologies to Syrian regime, will try to keep the leader of the protégé state in power. Iran has the capability and motivation to deliver its lethal materials to the embattled ally to use as the last resort. Iran is also very skillful and experienced when it comes to buying time for the Syrian regime: Tehran has escaped major international punishments and a strong response to its proliferation activities by misusing the so-called diplomacy and negotiation table. It knows very well how to buy time in order to delay any would-be concession, so to realize its nuclear ambitions.

Although there are serious limitations on the effectiveness of any military solution for bringing an end to a brutal dictatorship and replacing it with a democracy, in the case of Syria, a military intervention for humanitarian purposes is increasingly becoming a necessity. Similar to what happened in the case of Libya, the Syrian people now need to see firm support by the international community, i.e. a concrete step: a buffer zone implemented by NATO or a no-fly-zone carried out by US air forces over Free Syrian Army-controlled areas. The world needs to stop watching this massacre and step in to act before it is too late, in order to prevent the realization of the worst case scenario, a scenario engineered by Russia on the diplomatic front and Iran with its military and logistic support in sending chemical and biological weapons and IRGC Quds fighters to the Syrian battlefield. Otherwise, we will witness another massacre like the one Saddam Hussein perpetrated against the Kurds in Halabja, but this time in the major Sunni-dominated towns of Syria.

According to confidential information I personally gained in my four years of working as the Iranian Foreign Ministry’s interpreter, including attending various activities of the Organization for the Prevention of Chemical Weapons, Iran has every reason and all the know-how to mass produce the WMD’s for both domestic purposes as well as providing them for its allies. And when needed, Iran will not hesitate to supply the Assad regime with chemical and biological as well as other types of weapons of mass destruction. Assad has put everything at stake by placing all his eggs in the basket of Iran’s IRGC-Quds Force in the hope that when the worst case happens, it will rescue and grant him a safe haven in Tehran.

The Syria of tomorrow

Bashar has the same brutality and willingness to succeed at doing what his fellow despot, Libya’s Kaddafi, failed to do. And he has everything he needs to achieve the mission: firm and unwavering support from Tehran and Moscow, together with a considerable amount of chemical and other unconventional weapons. He is no less dangerous and savage than Kaddafi and if Kaddafi was unable to carry out his plans for mass slaughter, it was only because of the timely international engagement that foiled his evil plans. It is believed that Syria has already acquired enough chemical weapons from Iran and North Korea and, if needed, Tehran can hand over the latest of its weaponries, including its missiles technology and more WMD’s through different routes including but not limited to, Iraq of Nuri Al-Maliki, Eritrean Red Sea port, Sudan, terrorist groups like Salafi radicals active in north Africa particularly in post-Kaddafi Libya, Hamas and Hezbollah and by utilizing methods such as shipment under flag of other companies.

The fall of the current regime in Syria will greatly pave the way for democratization of the Levant region and severely weaken the position of Hezbollah and Islamic Jihad and to some degree Hamas as the mercenaries and front entities of the Islamic Republic. This will in turn, expose the “Mullah Thugocracy” as being more vulnerable to internal thirst for regime change and external pressures. What matters the most at this juncture is putting an end to inaction and offering a crushing response by the world community.

The time has come for the international community, led by the UN, NATO, USA and the European Union to engage and intervene on humanitarian grounds. Whether it will remains to be seen.

About the Author
Ahmad Hashemi is a former Iranian foreign ministry employee who worked as an interpreter. He is currently seeking political asylum in Turkey and works as a freelance journalist
Related Topics
Related Posts
Comments