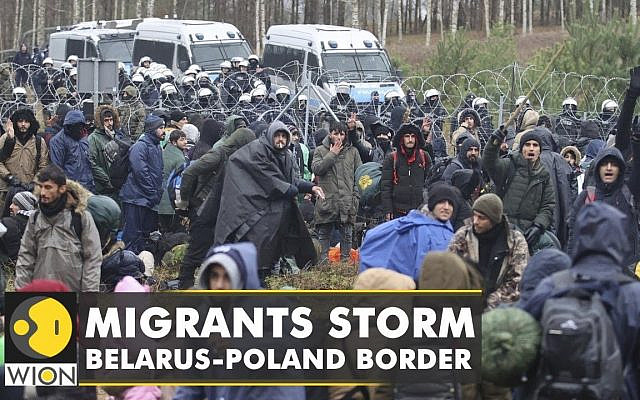 Twenty-three-year-old Mohamed Rasheed was at a loss after returning to Iraq from a grueling failed attempt to cross the Belarus-Polish border. “There’s no life for us here. There are no jobs; there is no future,” he told a Washington Post reporter.

Another man, who had just disembarked from a repatriation flight from the Belarus capital of Minsk to Erbil in Iraqi Kurdistan, frowned and obscured his face with a scarf, according to the reporter, as he responded to a question about why he had left.

“Those words cannot leave my mouth. Who dares to tell the truth here?” the man said.

The two men were returning to a country whose population has largely been excluded from sharing in the benefits of its oil wealth. Youth unemployment hovers at about 25 per cent. Public good and services are poor at best. Security forces and militias crackdown on and fire live ammunition at protesters demanding wholesale change.

Mohammed and his fellow returnee could have been from Lebanon, a middle-income country in which three-quarters of the population lives under the poverty line thanks to a corrupt elite unwilling to surrender vested interests irrespective of the cost to others.

In fact, they could have been from any number of countries in the Middle East, North Africa, and their African and Asian peripheries.

Almost half of the youth from non-Gulf countries in the Middle East and North Africa want nothing more than to leave in the absence of opportunities and prospects. They are exasperated with corrupt, self-serving elites.

This is a part of the world where devastating wars have wracked Syria, Yemen, and Libya. More recently, these countries were joined by Ethiopia while others in the Horn of Africa and the Sahel reel from jihadist violence that feeds on social and economic grievances.

To primarily hold responsible for the migrant crisis, human traffickers and cynical authoritarian leaders like Belarus President Alexander Lukashenko, who are willing to play power games and turn a profit on the back of innocent men, women, and children is swatting at symptoms of a problem that goes to the root of instability in the Middle East and North Africa.

To be sure, Mr. Lukashenko and the traffickers are part of the problem. Moreover, many Middle Easterners on the Belarus-Polish border appear to be economic, not political refugees with a legal right to asylum.

One could argue that the European Union’s refusal to take in the refugees on humanitarian grounds led to their repatriation to Iraq and Iraqi Kurdistan, which may have shortened their ordeal. Many risked being ultimately rejected, even if they had been granted entry to the EU because they were not political refugees.

The jury is out on whether the refusal will serve as a warning to the many in the Middle East and North Africa contemplating ways to get to Europe by hook or by crook.

All of this describes the immediate aspects of a dramatic crisis. The danger is that the focus on the immediate will obstruct badly needed thinking of ways to prevent or reduce the risk of future such crises and human suffering, aggravated by the willingness of governments to fight their battles on the backs of the least protected.

Acknowledging that a broader US policy focus is likely to prove more challenging than one narrowly concentrated on security, Mr. Feierstein argued that the United States could “bring assets to the table that could potentially enhance its role in the region and strengthen its position as the preeminent outside power.” The former diplomat was referring to big power rivalry with China and Russia in the Middle East and North Africa.

Kyrgyzstan has potentially emerged in what could provide evidence that a de-emphasis of the security aspects of the migration crisis would not automatically surrender real estate and /or leverage and influence to China and Russia.

Part of a Central Asian world sandwiched between Russia and China on which the United States has seemingly turned its back with its withdrawal from Afghanistan in August, Kyrgyz President Sadyr Japarov is using his election pledges to fight corruption and offer financial rewards to whistleblowers to lure the US back.

Mr. Japarov’s proposition, designed to rescue Kyrgyzstan from the clutches of Russia and China, is the central theme of a document that he has sent to the US State Department. The document outlines proposals to revive a broad political, economic, and civic engagement with the US bolstered by anti-corruption measures and affirmation of democratic freedoms.

If adopted by the Biden administration, Kyrgyzstan “would become ‘The Mouse that Roared’ to cite the title of the droll 1959 British film.  This time, however, the lesser power will have advanced its cause not by threatening military action…but with a sensible proposal by which a great power—the United States—…can once more become a serious presence in a major part of Asia that lies on China’s and Russia’s doorstep,” Mr. Starr said.

In contrast to Central Asia, the United States remains the dominant power in the Middle East and North Africa. But it’s a power seeking to redefine the role it wishes to play going forward in a region struggling to come to grips with an uncertain but changing US approach.

Kyrgyzstan could be showing the way for both United States and the Middle East. However, to make it work and reduce, if not stop, migration flows, the United States and its Western partners would have to prioritise confronting corrupt elites who will stop at nothing, including displacing populations, to preserve their illicitly gained privileges.