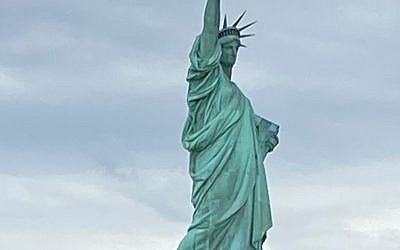 Approaching the Statue of Liberty on the ferry. Photograph by author

“I’ll have that one,” I said, pointing to the model in the window.

I paid by card.

She reached under her desk, then plonked a box on top.

I gazed at the stamp on the box.

I haven’t even checked to see if it went through!

We were on holiday in the USA.

What a country! Things people never mention but which to a Londoner seem amazing.

How helpful people on the street are, even the ones looking like hobos!

How courteous, cheerful and enthusiastic supermarket staff are, even packing your purchases! Can’t get service like that back home.

Yankees’ stadium not only had kosher hot dogs and knishes, but a rolling Maariv! Something for Tottenham Hotspur to emulate in midweek evening or late Sunday games? Although sometimes I think the team is beyond the help of prayer! Didn’t help the Yankees either. They lost 9-2!

However, the most moving thing (other than my nephew’s wedding) was taking the ferry to the Statue of Liberty.

As we slowly approached, I thought of my Zaida’s half-brothers over a century ago fleeing Russian pogroms, and the Uyghurs now facing persecution and Genocide in China. I thought of my Uyghur friend Rahima, who has not heard from her family since 2017. “Leave us in God’s hands,” their last words to her.

A guide (step forward, Dennis Mulligan!) gave an inspiring talk on the Statue’s history as the ‘people’s monument’. 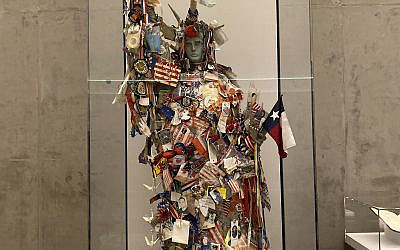 Liberty Lady: constructed by local people outside the firehouse station in midtown Manhattan in tribute to those fireman who lost their lives in 9/11- ‘an expression of hope and a rejection of tyranny, whether by government or mobs’. On display at 9/11 Memorial, New York. Taken by author.

We passed through the Ellis Island exhibition. I paused at pictures of Armenian refugees, fleeing their genocide, and found myself talking to two French history teachers, who mentioned they taught the Armenian Genocide.

“Do you teach about the current Uyghur Genocide?”, I asked.

“No, because it is not yet recognised by historians, as it is too soon.’

“Isn’t the point of teaching past Genocides so that people stop contemporary Genocides before they too are ‘history’? Do you teach the Genocide Convention?” I asked.

They didn’t, but seemed up for it! Vive La France!

At that point, an appalled woman came up to me, possibly because I had my Yid-lid (kippa) on my head and my tzitzit out and proud, and in shocked tones, asked if I had seen the photograph of Jewish children striking because of Slave Labour conditions in New York?

I promised to look at it, but somehow missed it.  To be honest, I wasn’t sorry. There’s a limit to how much misery I can take.

I was so moved by the Statue that I went to buy a model for my desk.  I don’t actually have a desk, but you get the point!

And that’s when I saw the stamp across the box, “Made in China”

How ironic that America’s symbol of hope and liberty is made by a country that denies both to so many. Could it even be made by Uygur Slave labour?

I was kicking myself for not asking where it was made before buying, as a week earlier, my wife found that merchandise in the Boston Tea Party Shop & Museum commemorating the birthplace of American freedom, was made in China, the birthplace of Uyghur Genocide. 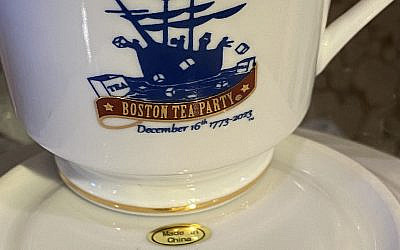 What distinguishes Uyghur Slave Labour from other forms of slavery is that it is an intrinsic part of the Genocide. Husbands and wives are separated to deliberately keep the birth rate down. Transfers of over half a million Uyghurs across the country is designed to reduce population density and weaken communal cohesion. The absence of one or more parents in slave labour camps or factories is used as pretext to remove nearly a million children from their homes into state orphanages homes that forbid speaking Uyghur or practising Islam.

When I got home, quick  research revealed at least 17 Chinese companies supplying Statue of Liberty souvenirs, six in provinces known to be linked to the Uyghur Region in forced labour transfer schemes.

If I write to the National Parks Commission running Ellis Island or to the Boston Tea Party Museum, privately owned by Historic Tours of America, to ask where they source their Chinese merchandise from and what due diligence they do to ensure absence of Uyghur Slave Labour,  I’ll get the same brush off I received in the UK when I tried to find out where Chanukah candles made in China came from!

That’s when I thought that maybe the USA Government could help, because the USA has done more than any country to try stop this Genocide. They have recognised it, sanctioning officials and proscribing businesses with critical roles, and passed the Uyghur Forced Labour Prevention Act to stop importation of products from the Uyghur region and paired provinces. So, if the US Government, who part fund the National Parks Commission, starts asking questions, that’s harder to dodge!  Once the names of the companies producing the merchandise are known, their corporate or investor relationships with the Uyghur region and other provinces can be investigated.

However, even if this merchandise is not made by Uyghur Slave Labour, it is simply unacceptable to have America’s patriotic symbols of Liberty, Freedom and Hope made by a country carrying out Genocide. As  we cockneys say, “It’s taking a bloomin’ liberty!”

Under the terms of the Genocide convention, were the USA to ban sourcing of such merchandise from China, it would be a ‘reasonable action’ to ‘punish and prevent’ Genocide. It would further highlight the Uyghurs’ plight, even to historians! And it would, as per Biden’s inaugural address, be ‘leading by the power of our example.’

When we visited the 9/11 memorial, I was awestruck when I realised that the death toll could have been exponentially but for that novel  man-made barrier, the Slurry Wall, holding back the waters of the Hudson River thus preventing flooding of the entire subway system. Involuntarily, I said to my wife, ‘God was in the Slurry Wall that day.’ And maybe, God is also in the man-made covenants and conventions, like the Genocide Convention, intended to save and protect life, for it is a Jewish view that God figures it’s up to humanity to intervene in history to save life, right wrongs and correct injustices.

We Jews have just emerged from Rosh Hashanah and the fast of Yom Kippur, where we repeatedly prayed that ‘Injustice will have nothing more to say, and all wickedness will fade away like smoke..and the rule of arrogance pass from the earth.’

We read the words of Isiah (58:6), which an audacious translation by the late Lord Chief Rabbi Jonathan Sacks renders as “This is the fast I choose….loose the bindings of evil and break the slavery chain”.

The word translated as slavery is ‘motah’, usually translated as yoke, and derived from ‘mot’ (to totter), so the rendition above used to puzzle me until when I saw Assyrian reliefs in the British Museum, depicting wooden yokes round the necks of enslaved captives, each yoke chained to that of the person behind. Indeed, it recalled the shackles drone surveillance has shown are worn by blindfolded Uyghurs who stumble and totter as they are transported we know not where.

So, I thought I’d make a Yom Kippur appeal, direct to President Biden, to invoke the Genocide Convention, with or without evidence of Uyghur Slave Labour, to stop this sourcing of souvenirs of America’s most moving symbols of its core values from a nation that values none of them.

This may only be a small step in stopping this awful Genocide, but maybe such action is what leaving my friend Rahima’s family “in God’s hands” looks like.