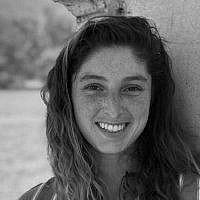 The Blogs
Sara Goel
Apply for a Blog
Please note that the posts on The Blogs are contributed by third parties. The opinions, facts and any media content in them are presented solely by the authors, and neither The Times of Israel nor its partners assume any responsibility for them. Please contact us in case of abuse. In case of abuse,
Report this post.

On January 3rd, CAMERA on campus hosted an online event with renowned international law expert, Professor Eugene Kontorovich. The webinar, cosponsored by Yamina at Ben Gurion University, Kahol Lavan at Ben Gurion university, Im Tirzu at Sapir College, and StandWithUs, was designed to expose students to the legal facts about Israel. When reflecting on Sunday’s event, Lotem Shahar, the head of Yamina at Ben Gurion University, highlighted the importance of Israeli students understanding International Law in relation to Israel. According to Shahar, international legal facts are useful tools in the arsenal of Israel activists, and serve as an effective complement to the primarily used narrative-based activism.

In only thirty minutes, Professor Kontorovich explained the intricacies of Israel’s borders, their origin in the San Remo Conference of 1920, and how these oft-forgotten facts are critical in understanding Israel’s legal claims in the West Bank and Gaza Strip. Indeed, he clarified that in accordance with the legal doctrine of uti possidetis juris, the State of Israel inherits the borders of the preceding governing entity — in this case, the British Mandate. The professor did note, however, that it could be argued that Israel may have forfeited its claims to Gaza when it withdrew from the territory in 2005. Professor Kontorovich also discussed the importance of looking comparatively at different countries that were formed with prior mandate borders, as Israel was, to recognize the hypocrisy of the accusations lobbied against Israel.

The professor spoke of the legal status of Jewish settlements in the West Bank and provided a counterargument to the frequently heard assertion that these settlements are illegal. Claims of illegal Israeli settlements and illegally occupied territories can be heard not merely in prominent media outlets and the halls of the United Nations, but also voiced on college campuses by grassroots anti-Israel groups like Students for Justice in Palestine (SJP). Sadly, these terms have become part of the accepted vernacular when discussing the conflict.

In the lecture, Professor Kontorovich highlighted the double standard applied to Israel by citing examples like Iraq, whose borders were decided during the San Remo Conference, and is also home to a large Kurdish minority with aspirations for self-determination. He clarified that although Iraq and Israel share notable similarities, Iraq is not seen as the occupier of Kurdish land, and the international community is not up in arms with allegations that Iraqi borders are illegitimate. In contrast, Israel has been condemned by the UN General Assembly 17 times in 2020 alone (compared to 6 overall for the rest of the world) due to settlement activity or actions conducted in the West Bank and Gaza. Professor Kontorovich explained that questioning the validity of borders derived from past mandates creates a slippery slope that can lead to contested borders in numerous other Middle Eastern countries.

This short lecture solidified the notion that knowledge is power. Through misinformation, misuse of legal jargon, and double standards, Israel is portrayed as a hostile entity whose existence is illegitimate. Therefore, it is critical that students learn the facts about Israel’s legal claims to the land and know-how to make comparisons with other countries facing similar circumstances.

Today, when Israel activists on campus are faced with an ever-growing slew of antisemitic propaganda, misleading information, and incorrect legal terminology, a shift in strategy may be necessary. Although narratives are an important component to understanding the conflict, Professor Kontorovich provides another persuasive approach. This strategy, which focuses on international law, can be used to help strengthen students worldwide in their activism against antisemitism and anti-Zionism on campus. Now more than ever, it is important that Israel activists are given all the tools they need to speak with confidence and pride about the truth and facts.

About the Author
Sara is a CAMERA on campus fellow at Sapir College where she is a first-year law student. She is a Shulman fellowship alumna and graduate of Ben Gurion University with a BA in Middle Eastern Studies.
Related Topics
Related Posts
Comments