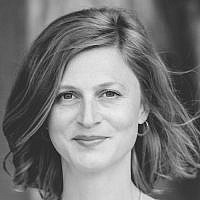 The Blogs
Miriam Waltz
Apply for a Blog
Advertisement
Please note that the posts on The Blogs are contributed by third parties. The opinions, facts and any media content in them are presented solely by the authors, and neither The Times of Israel nor its partners assume any responsibility for them. Please contact us in case of abuse. In case of abuse,
Report this post. 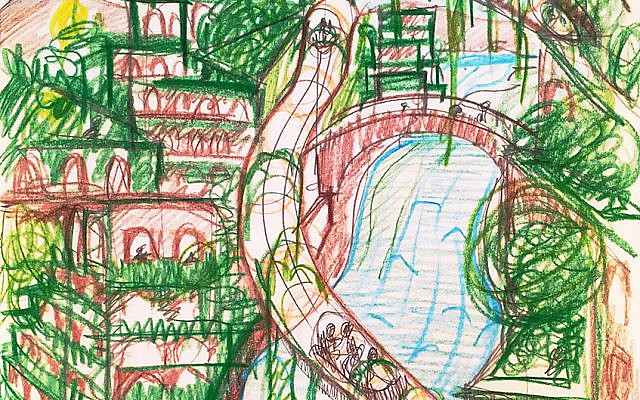 City and Nature intertwining when our Collective and Individual voices are harnessed for a just, vibrant and biodiverse stewardship of our planet (image by Miriam Waltz)

The world’s population is projected to reach 10 billion people by the middle of this century. With this imminent reality, how can we ensure that our carbon-burning, air-breathing bodies will all have food, water, health, shelter, community and happiness?

In 2016, The UN outlined 17 Sustainable Development Goals, encompassing all areas of planetary life, as a global vision for transforming our world for the better by 2030. The goals are a call to action in seventeen areas of basic human needs such as ending hunger, gender equality and climate action.

I believe, that for ten billion voices to be able to collectively participate in the conversation on how our common household should be run, it is necessary to add another eighteenth goal: Representation. ‘Representation’, a goal for the sake of itself, with its implementation, would pave the way to achieving the other seventeen goals, for the earth and our civilization to be run in the most just, healthy, free, bio-diverse, vibrant, authentic, kind and sharing way.

The biblical Jethro’s advice to his son-in-law Moses, described in the book of Exodus, may have some interesting light to shed on the ‘Representation Calculation’.

“Why do you sit as judge, Moses, while the people stand about you from morning to night?”… “I decide between man and his neighbor and make known the laws of God.” …“You will tire yourself and the people out.” responds Jethro. “…find capable men who fear God and trustworthy men who spurn ill-gotten gain. Set these men over the people as chiefs of thousands, hundreds, fifties and tens…They will decide the minor disputes and bring the major disputes to you.”

Is it possible that Jethro’s suggestion could be scaled to this vibrant, creative, rabble of ten billion men, women and children alike? 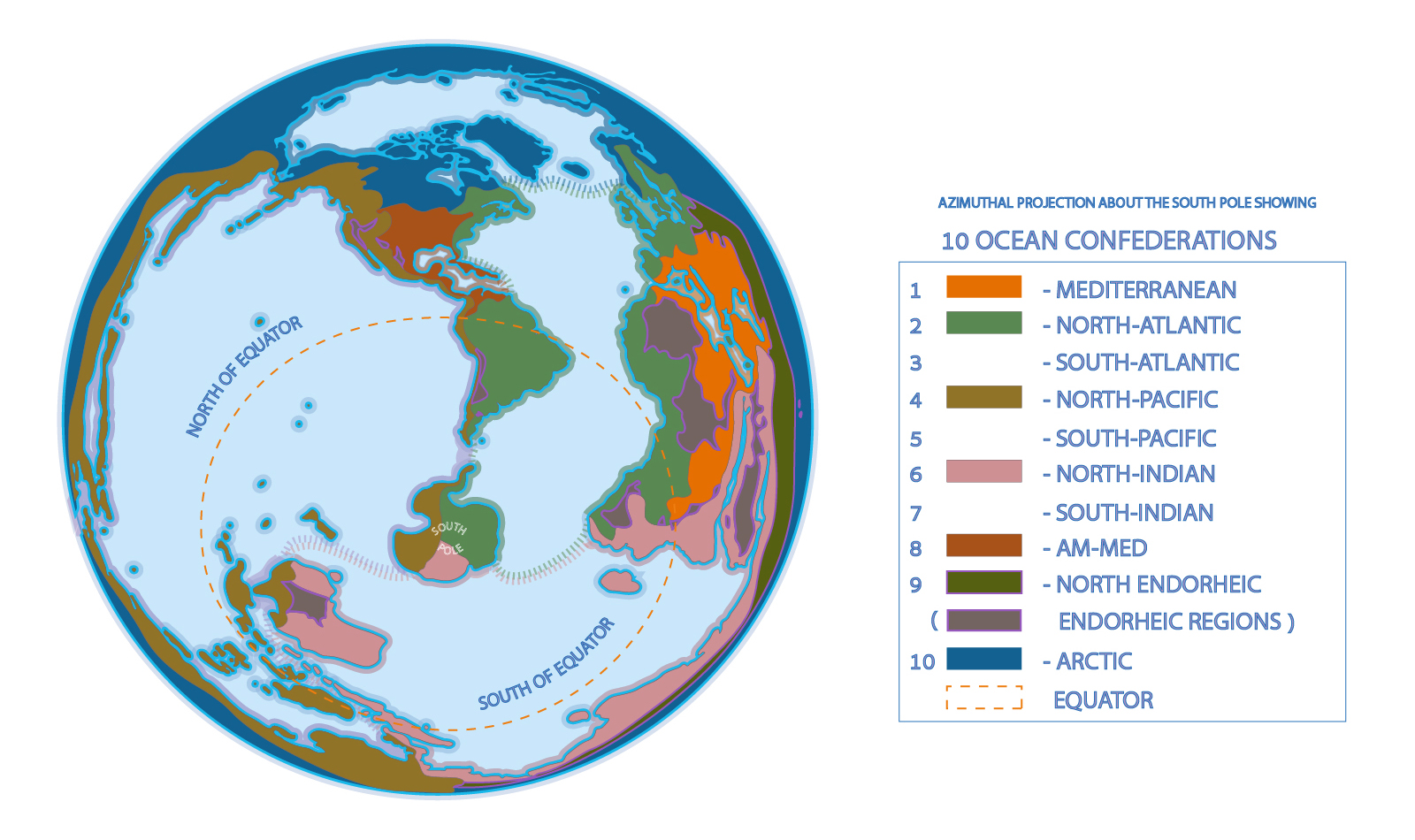 Top Down and Bottom Up

By simultaneously zooming in and zooming out: democracy and stewardship of our planet would be organized reciprocally both from the top down and from the bottom up. To divide a world population of up to 10 billion by Jethro’s tens, fifties, hundreds and thousands, from the top down, would make: 10 Ocean Confederations of 1 billion people each or 50 Alliances of 200 million people each or 100 Unions of 100 million people each or 1000 States of around 10 million people each. Using one shared resource, water, as an example for the sharing of planetary responsibility at different scales, the ‘Ocean Confederations’ would collectively manage the oceans and large water bodies, the ‘Alliances’ the seas, the ‘Unions’, the lakes and large rivers and the States, regional watersheds, aquifers and local rivers. With AI, Big Data and GIS, these powerful tools can be harnessed for efficient and just, collective management and administration of the world’s voices and shared resources. 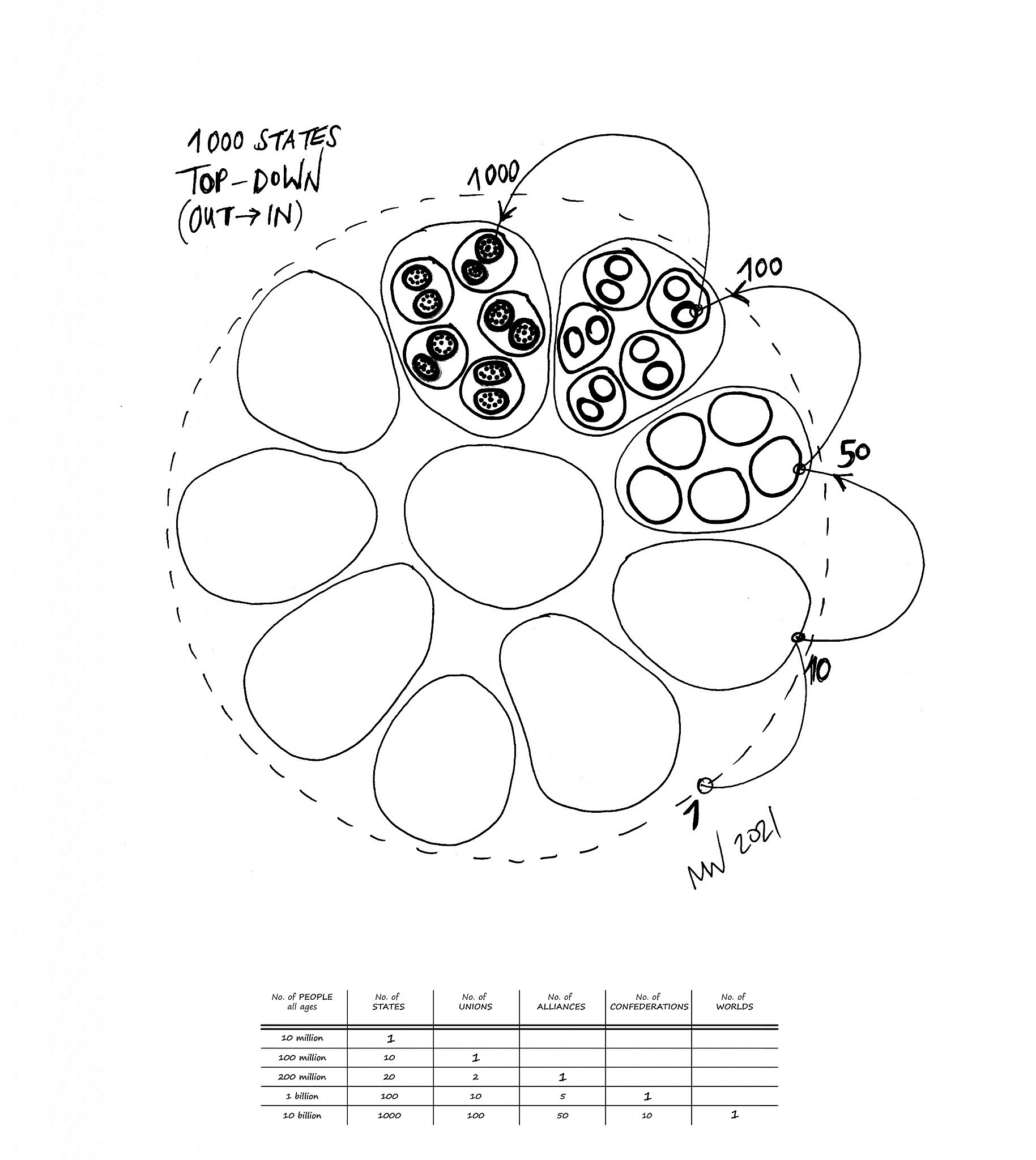 From the outside zooming in, diagram and table showing organization of one planet of 10 billion people into 1000 states of 10 million people each (image and table by Miriam Waltz)

Democracy will we built from the bottom upwards: beginning with a group the size of 10 people of voting age. (The current voting age would be collectively lowered to allow young people and developing countries with young populations their ever-increasing, important say as the voice of future generations) Our Covid experience has already coined the name ‘bubble’ for our closest connections. Soon, the ‘bubble’ will take on a greater importance in all aspects of our shared lives: a measuring stick for how much resources and energy we take out and put back in.  These 10 voices will choose one voice to represent them and each scaling up of the size of the group will choose a voice to proceed to the next sphere of influence. From 10 to 10 billion is only ten steps removed: in a global election staggered over ten stages (perhaps ten weeks) one would democratically elect one thousand State leaders who have each been chosen ten times by ten different scales of population. 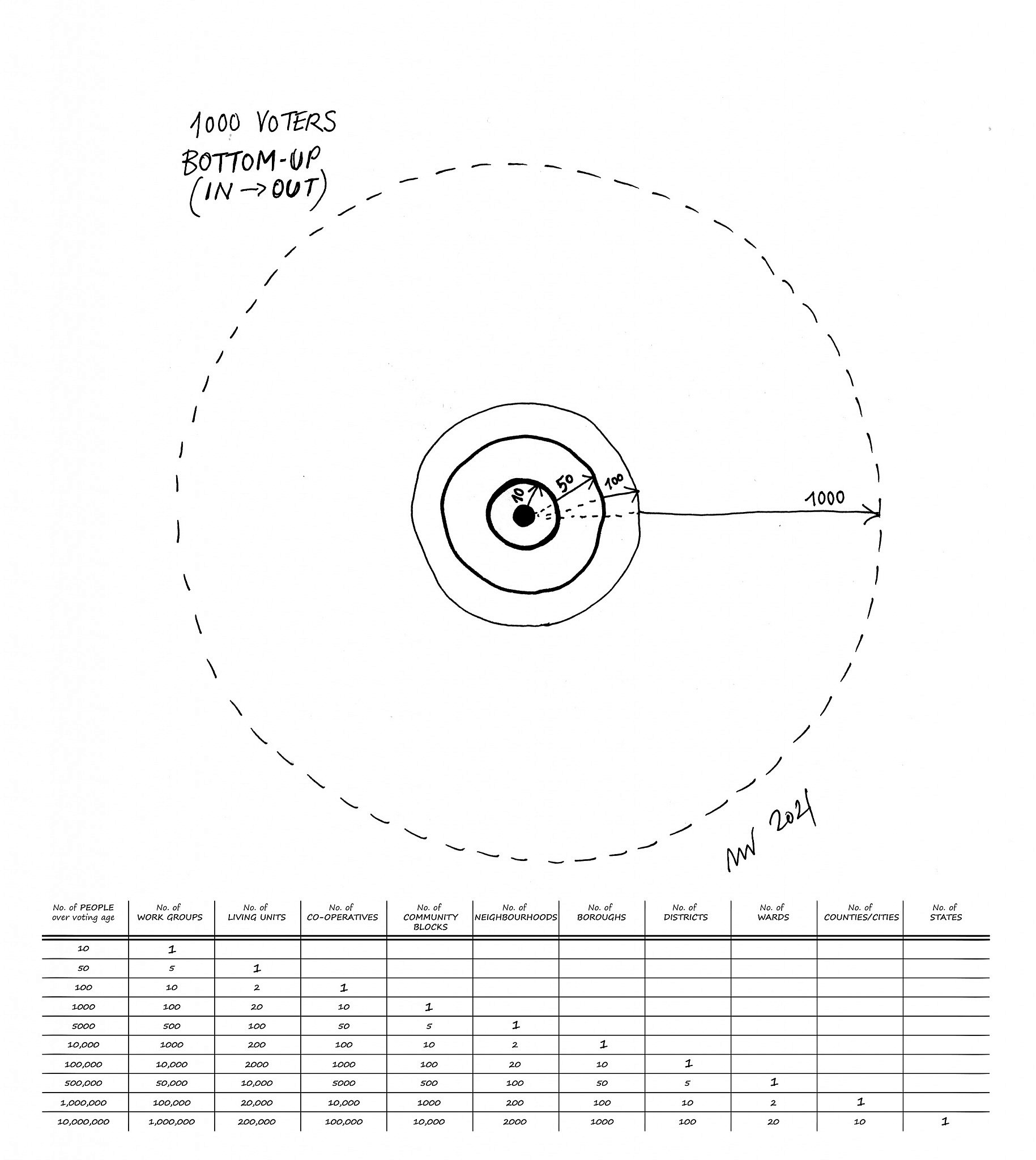 From the inside zooming out, diagram and table showing organization of one 1000 voter communities into ‘work groups’ of 10 people (image and table by Miriam Waltz)

If, instead of taxing income and other infinite sources of prosperity, land and other finite resources would be leased, under the management of each respective voting group, (instead of by a landlord, bank, corporation or duke) a locality would be able to keep the value of the land for its own public revenue. This way, an economy is localized, accountable, self-sustaining and sharing at the same time. Monopoly, speculation and the withholding of land would be impossible because it simply wouldn’t pay to keep land out of its best, most efficient and sustainable use. Only the community, at its respective scales, has the ability to maximize the potential of the surface and depth of this planet. With a free-market being retained, the private user will be allowed private access at a market price (economic rent) which is given back into the common pocket instead of a dead-end private pocket, to fund equal access to Health, Education, Rights and Well-being alongside ecological stewardship of our planet.

The leasing of this planet would be organized by a system of tithing starting at the scale of the ten-person ‘work group’ and growing its way up to the scale of the planet. Just as in the ten stage, planetary election, world revenue will be gathered in ten stages and will fund ten, local to global scales of human and other planetary life needs. This would be the equivalent of paying rent to your ‘community block’ (1000 voters) instead of a private landlord or lender. Then, for example, a tenth of your rent would be transferred to the ‘borough’ (10000 voters), a tenth of the borough tithe would go to the district (100000 voters) and so forth, each time spreading a tenth of the revenue and wealth to a power of ten greater group of people. Another tenth of your rent could radiate in tithes from the community block to your smaller work group, leaving 80% of the rent you pay to developing your walkable community block’s housing, amenities and even industries and agriculture. The tithing percentages would encourage the spreading of wealth globally whilst keeping economies and governing bodies local. 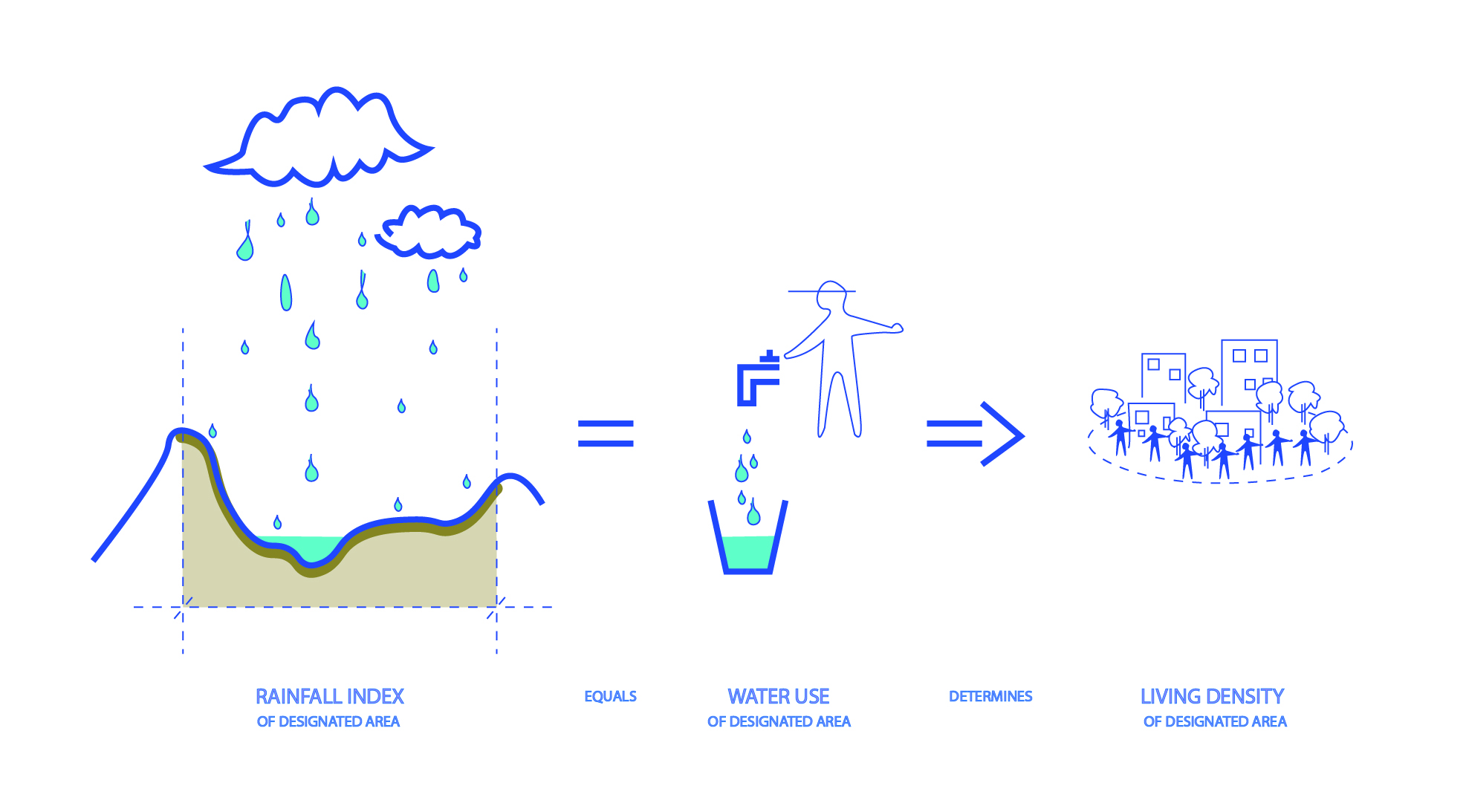 Rainfall index as a measure for urban living density, encouraging smart water use and absorption of rain into ground and aquifers below where the locality becomes accountable for resources use and stewardship (image by Miriam Waltz)

The density of habitation will be set by walkability and transportation considerations alongside rainfall index versus water usage. Budgets can be aligned with the combined needs of the community in tune with a net-zero water and carbon calculation: the different tithes of revenue stream would pay for whatever human need is deemed relevant to the size of the group, whilst taking responsibility for its use of resources and ecological footprint within its boundaries.  For example, housing is provided to the needy from the community block revenue, an education system funded by the district revenue, a public health system funded by the county revenue and so forth until you reach the ozone and oceans being funded by the global tithe revenue. Data is also considered a common resource. Each data set would belong to the group at the scale which makes up that set. 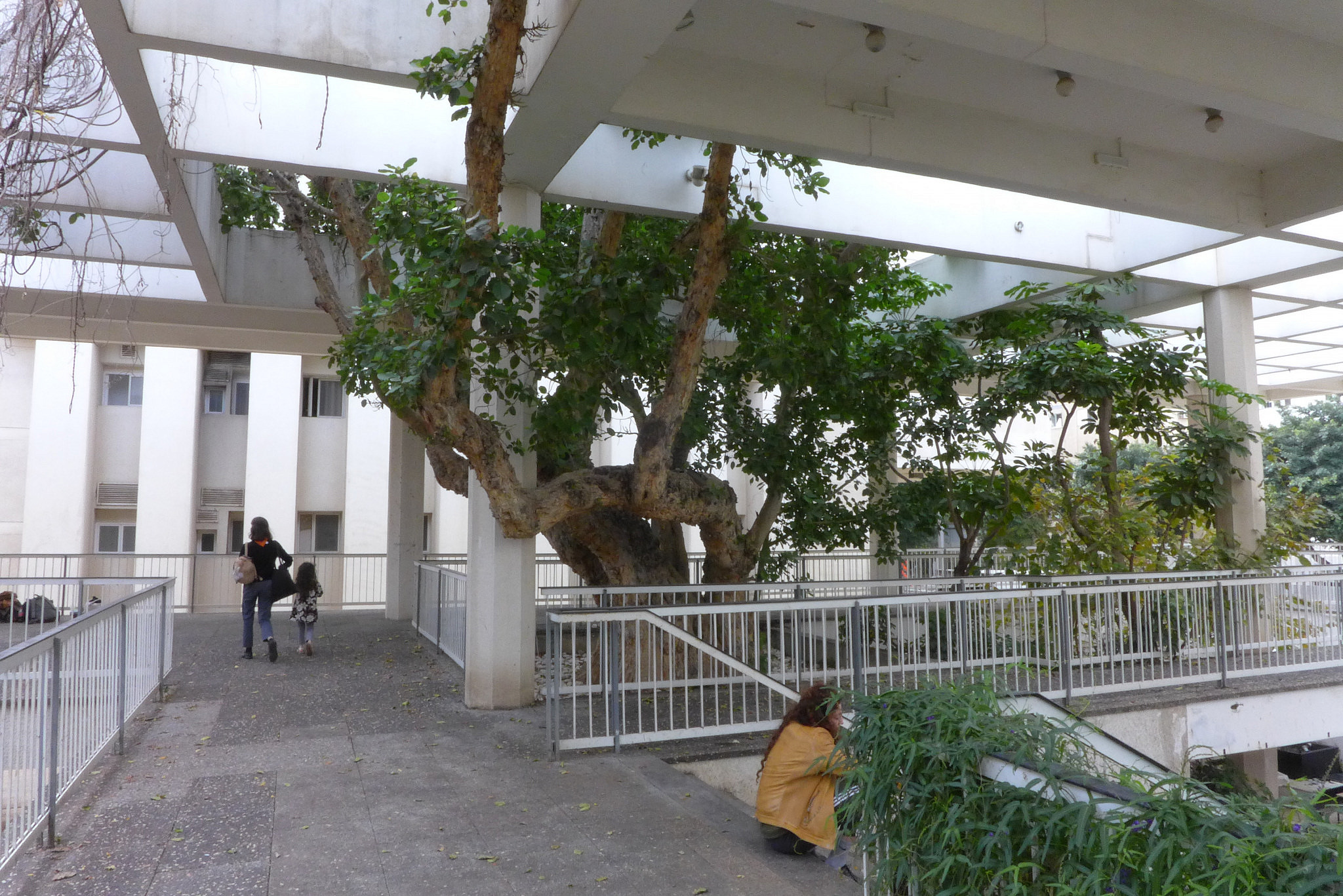 Indigenous to the coastal plain flora of Tel Aviv, a Ficus sycamorus, hundreds of years old, is incorporated into the public infrastructure of an inner-city public garden, Gan Yaakov, Tel Aviv (photo by Miriam Waltz)

Citizenship and voting rights are based on a seven-year residence period in one world location only and not on nationality. On one hand, migration would be open and free, with location registration happening every seven years. On another hand, every world location would have economic stability and peace and therefore, staying where you are born is a viable and desirable option. Import and export between states is allowed, only if the producing state is not running at a resource and ecological deficit to itself. Elections are twice every seven years. Community block (1000 voters) leases are reauctioned every seven years to the 900 top bidders who then pay the price that they bid in rent to the community which will manage and develop itself. Children are included for free in the community. An extra 100 block spots are allocated by lottery and sponsored by the community revenue to those retired or unable to work. Every fifty years the total world land boundaries are released and redrawn according to the world’s watershed boundaries and updated ratio between rainfall and water usage per capita. As we become more efficient water users, composters of humanure and fixers of the precipitation and transpiration cycles by mass reforestation with at least one tree per city dweller, green roofing, soil regeneration and local agriculture our individual carbon footprints will come closer to home until reaching net-zero.

Nothing that I have written here is new. The technology to achieve and implement the seventeen Sustainable Development Goals and ultimately heal the planet already exist and are being talked about over millions of world-zoom-conversations daily. The barrier is only in our misunderstanding of what is public and what is private ownership, how to collectively spread the responsibility and how to individually take responsibility.

When we can release ourselves from this tiny, giant obstacle, our individual voices will find their definition and pitch among the whole and everything will be possible. Then, our eco-systems and our oikos will not be tired out and instead will thrive in global and local equilibrium as per Jethro’s simple, scalable and sustainable suggestion.

-“World Federation: A Thousand States”, Letters to the Editor, NY Times, March 15, 1973. As referenced in “A Pattern Language” by Christopher Alexander

-Food and Agriculture Organization of the United Nations: http://www.fao.org/aquastat/en/

-‘Powers of Ten’, film by Charles and Ray Eames

-‘Progress and Poverty’, by Henry George

About the Author
Miriam Waltz made aliyah via London, Basel and New York. She is an architect that has worked in world renowned firms on various continents. Currently she resides in Tel Aviv and is principal founder of Studio Itouf. The studio designs spaces, environments and habitats that promote wellbeing, belonging, authenticity, autonomy and collaboration between mineral, vegetable, animal and human. Photo by Yelena Kvetny
Related Topics
Related Posts
Comments