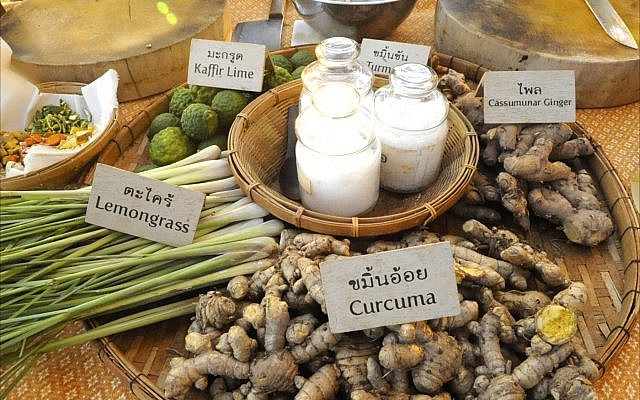 Note: This is the first of three articles about my recent press trip to Thailand, which was organized and financed by the Royal Thai Embassy in Washington.

NAKORN PATHOM, Thailand — It’s only an hour’s drive from the skyscrapers and choking pollution of chaotic Bangkok, but Sampran Riverside might as well be on another planet.

Here at this 35-acre tropical eco-paradise, visitors can cruise leisurely along the Tha-Chine River, eat organic fruits and vegetables from the resort’s own farm, even learn how to make their own cosmetics. 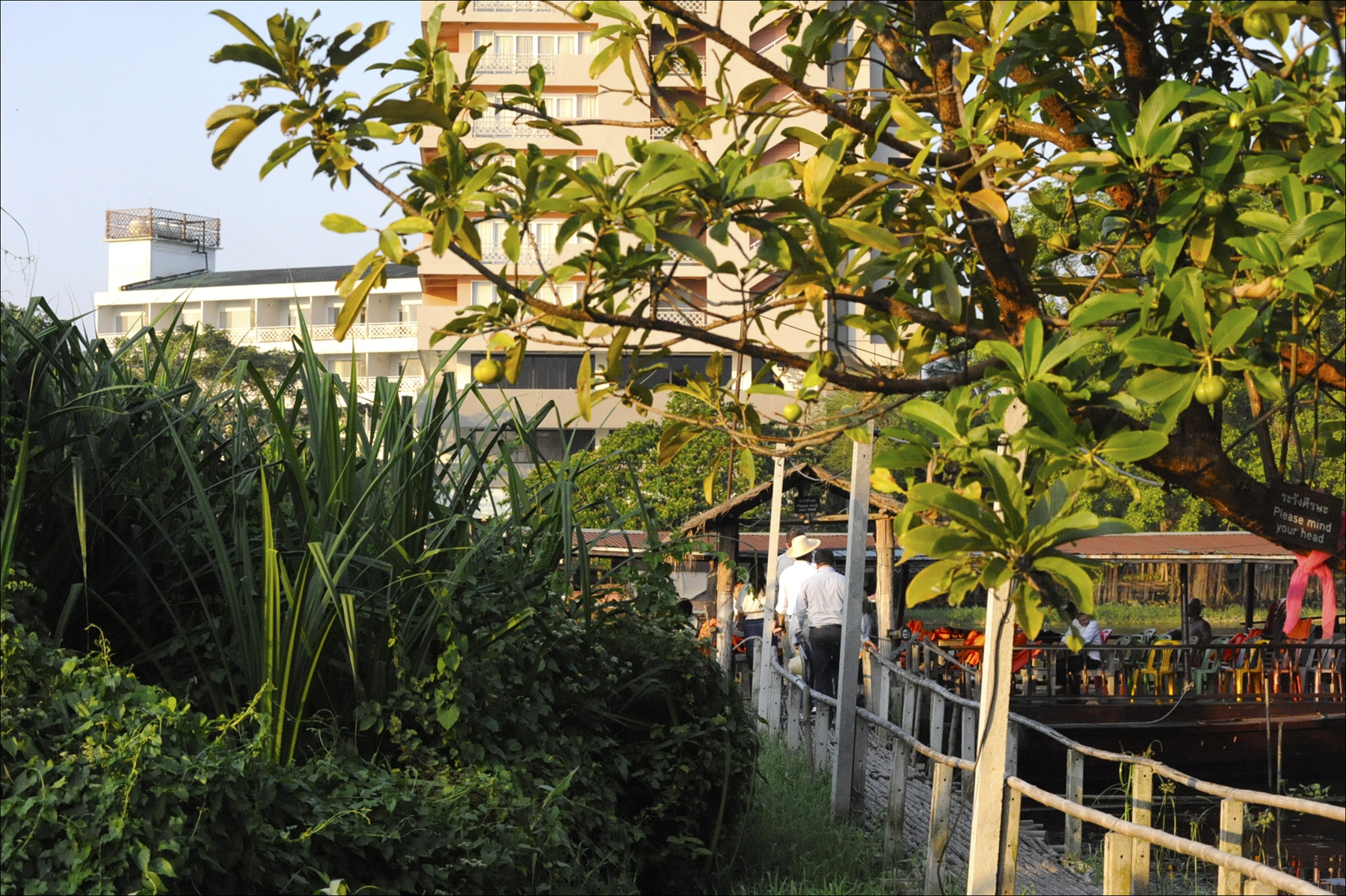 “These days, people don’t just want to watch; they want to experience,” said the resort’s managing director, Arrut Nawaraj. “So we have boxing, arts and crafts, dancing and herbal workshops. On the other side of the river, we have an organic farm and agricultural activities.”

Nawaraj, interviewed during a press trip to Thailand earlier this year, spoke to this reporter as a group of foreign guests sat on benches, enjoying an organic buffet lunch while watching clumps of water hyacinth float by. 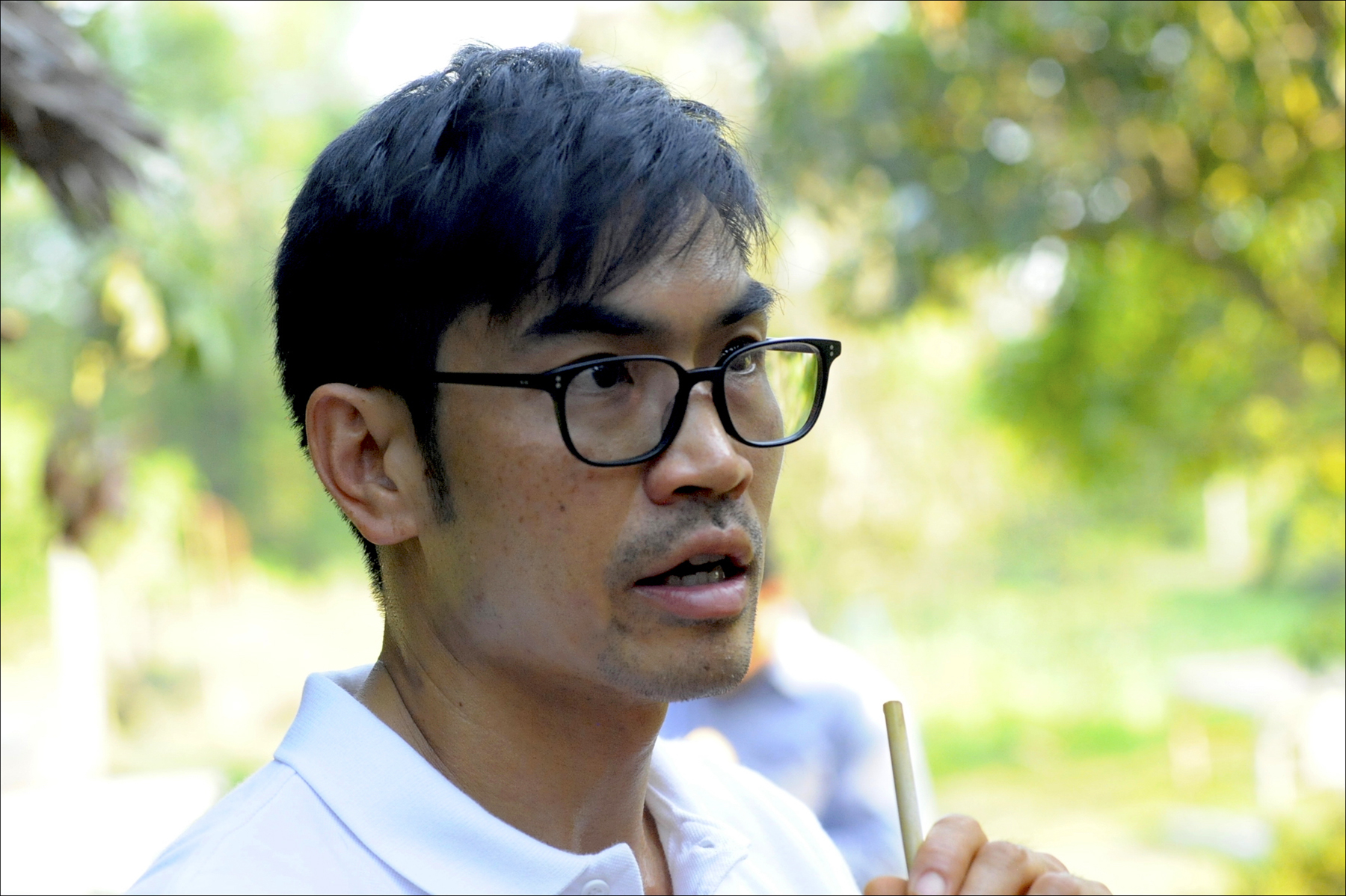 The 49-year-old entrepreneur said his grandmother started the venture in 1962 as a rose garden. He took over the operation about 13 years ago.

“We didn’t really intend to make this a business. She just bought a house by the river,” he said. “When I came back to manage the property, I thought a good selling point would be certified organic fruits and vegetables that we could grow for our guests.” 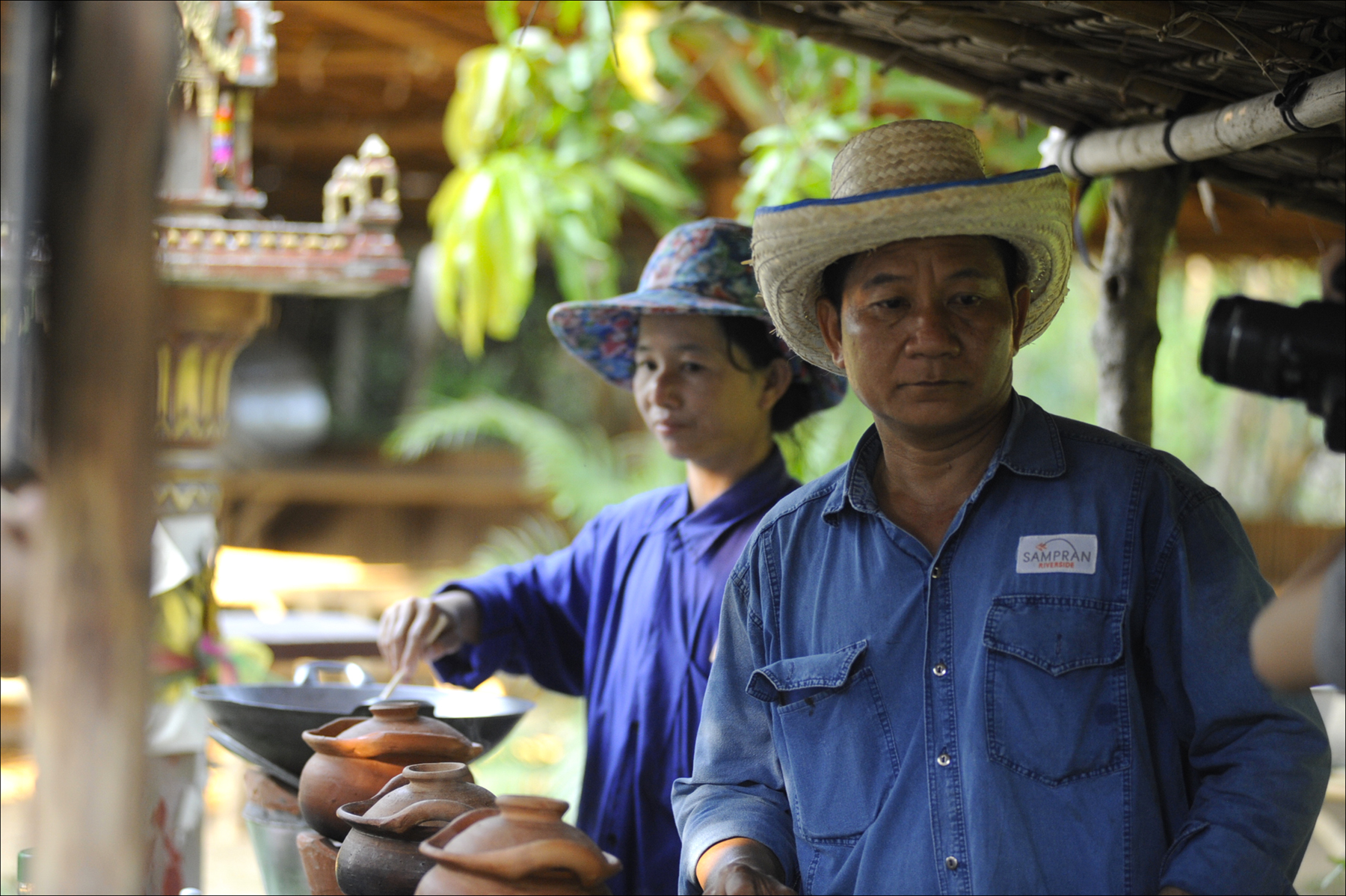 The 160-room resort caters mainly to a Thai corporate clientele. Only 30% of its guests are foreigners — and most of them come from other ASEAN member countries. Despite Thailand’s popularity with Israelis, not a single Hebrew-speaking tourist was anywhere in sight.

Guests at Sampran Riverside pay $80 a night including breakfast, and an additional $15 for the farm tour. 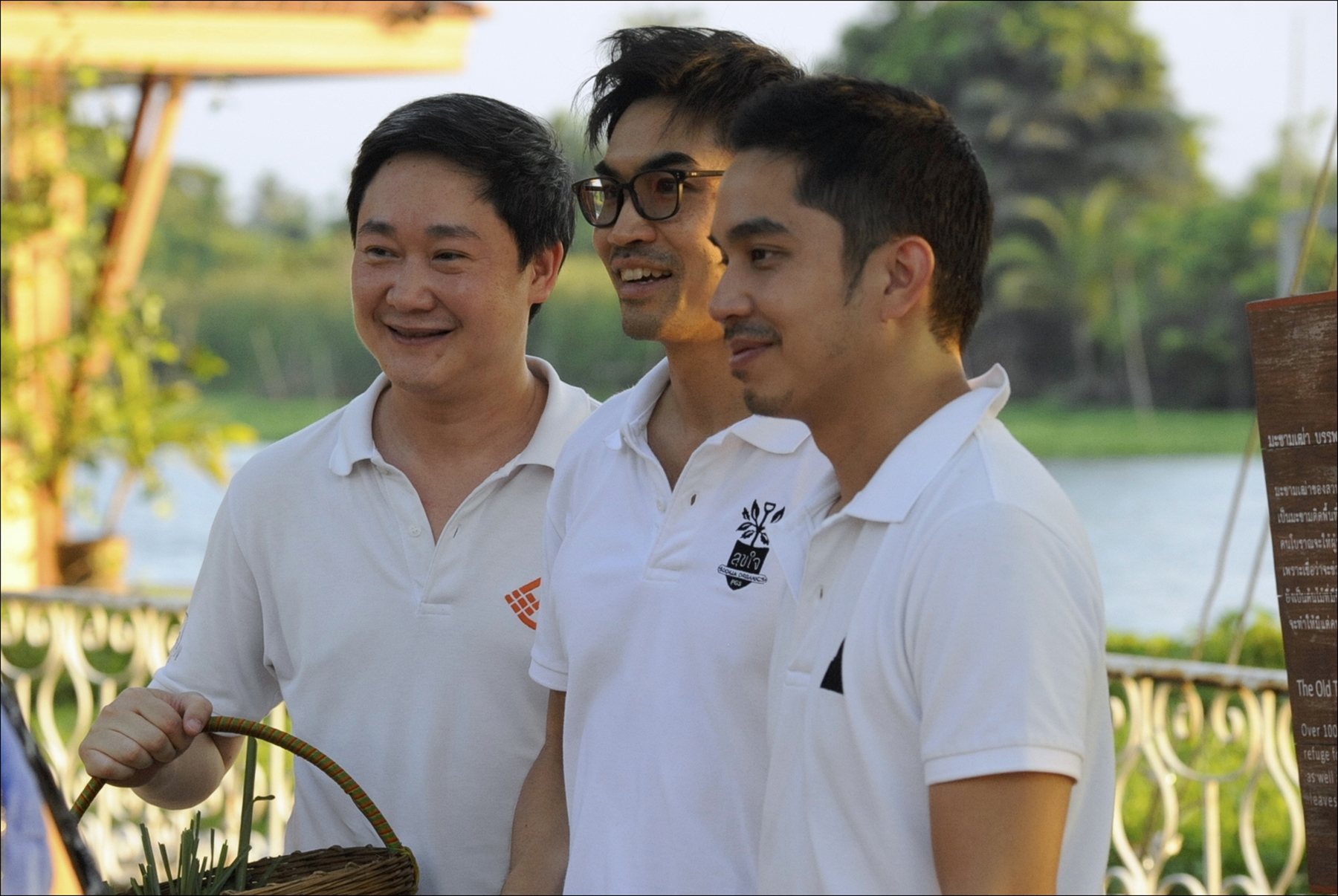 Arrut Nawaraj (middle), managing director of the Sampran Riverside resort, poses for a picture with two of his employees. (Larry Luxner)

“Most of our income is derived from tourists staying here,” said Nawaraj, who studied at Imperial College London. “The organic farming project came along eight years ago. I decided to get in touch with local farmers to supply our kitchen. I didn’t intend to make it a business. I told them I’d pay them the same price as I was paying suppliers — which was a lot more than they were getting from the middlemen.”

Nawaraj said going organic helps relieve Thailand’s unsustainable dependence on fertilizers, herbicides and pesticides. He complained that Thailand, despite its relatively small population of 68 million, now ranks as the world’s fourth largest user of agrichemicals after China, the United States and Brazil — about 140,000 tons of it a year. 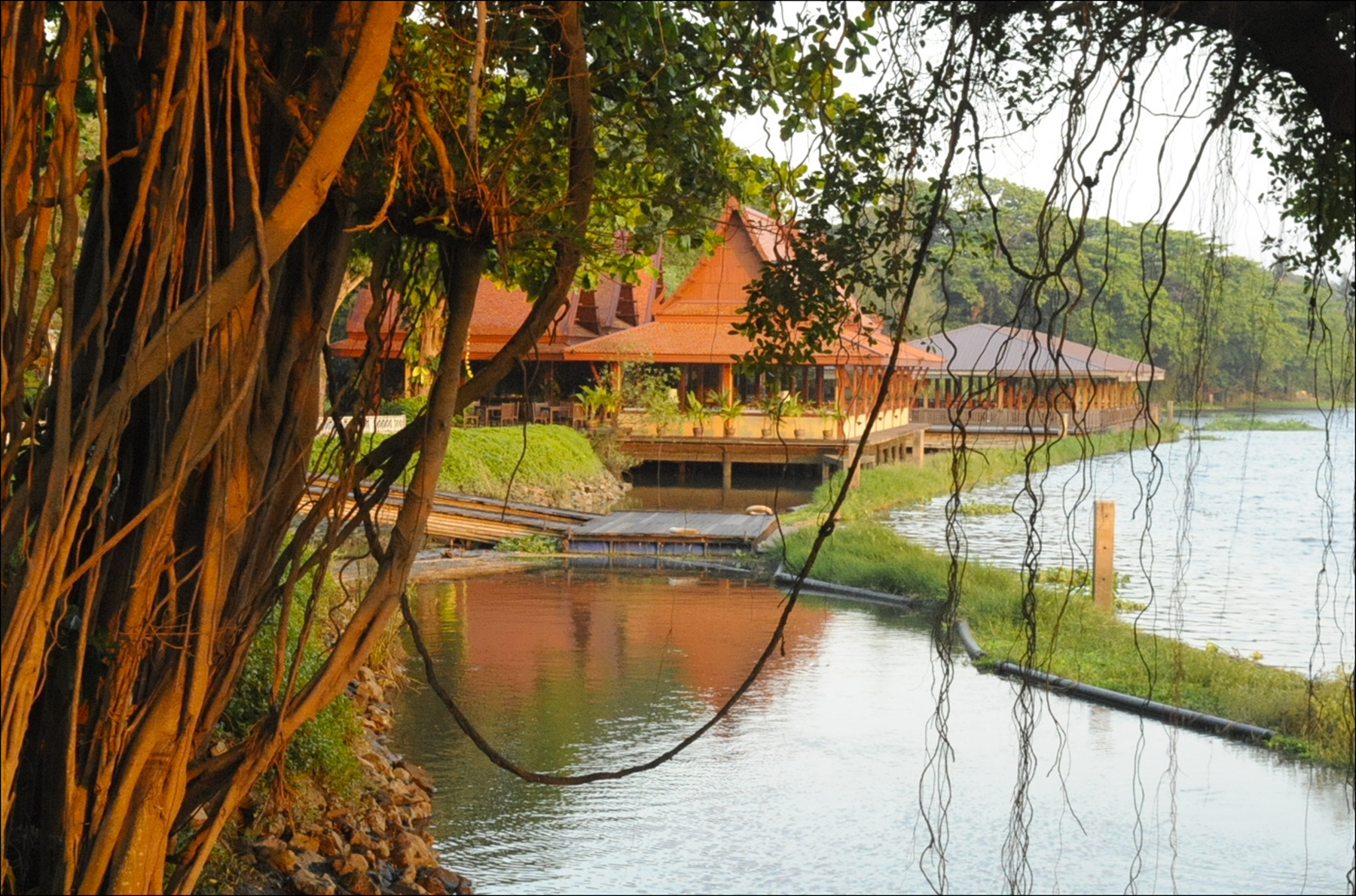 A view of the Sampran Riverside resort near Bangkok. (Larry Luxner)

“This is nothing to be proud of,” he said. “All of this goes into our food, so it’s really our problem. The farmers are in debt because the price of chemicals is going up all the time, and it’s imported. The solution is simple: take chemicals away from the upstream. Agrichemicals only came after the Green Revolution 50 or 60 years ago. But the farmers don’t know their consumers, they’ve only known middlemen all their lives. Turning this vicious cycle into a virtuous cycle is our mission.”

Nawaraj, who clearly doesn’t think too much of the “NGO model” of charity, said Sampran is a social movement based on an inclusive business model, not an effort “to go out and save the world. We’re doing this to save ourselves.” 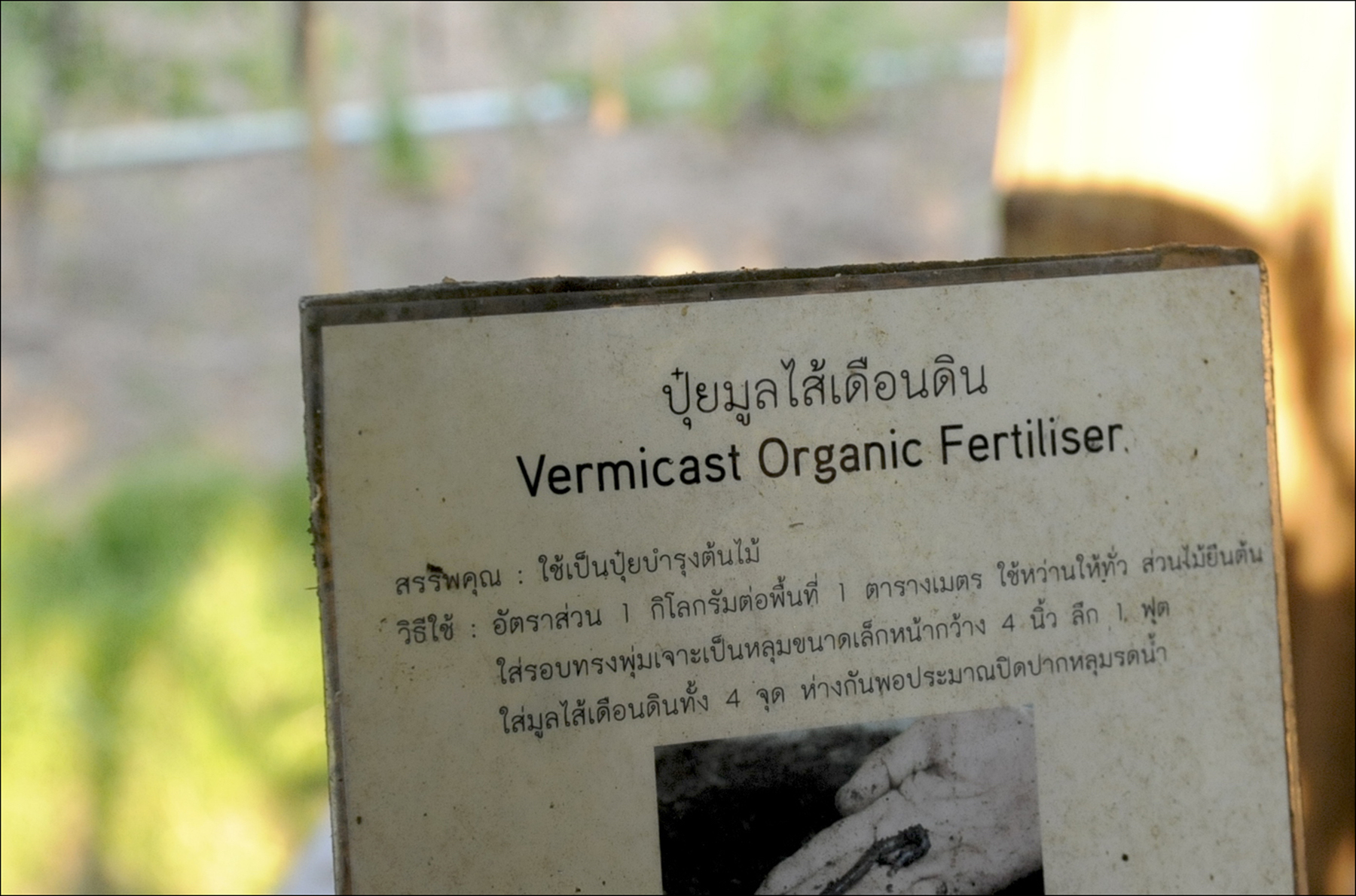 A sign in Thai and English explains for the benefit of visitors to Sampran Riverside how organic fertilizer is made. (Larry Luxner)

The foundation he set up now has 10 full-time employees. He also collaborates with universities on projects for conventional farmers, teaching them how to go organic.

“In order to entice them to switch from conventional to organic, health is paramount. But all they’re thinking of is how to get rid of their debt,” he explained. “My job is to find alternative market channels for them.”

For the last seven years, Nawaraj has been running Thailand’s largest organic farmers’ market. The Sookjai weekend market has about 60 vendors and attracts 1,000 visitors daily. Last year, it generated $1 million in sales — which works out to 39,000 baht (about $1,200) per vendor per month. 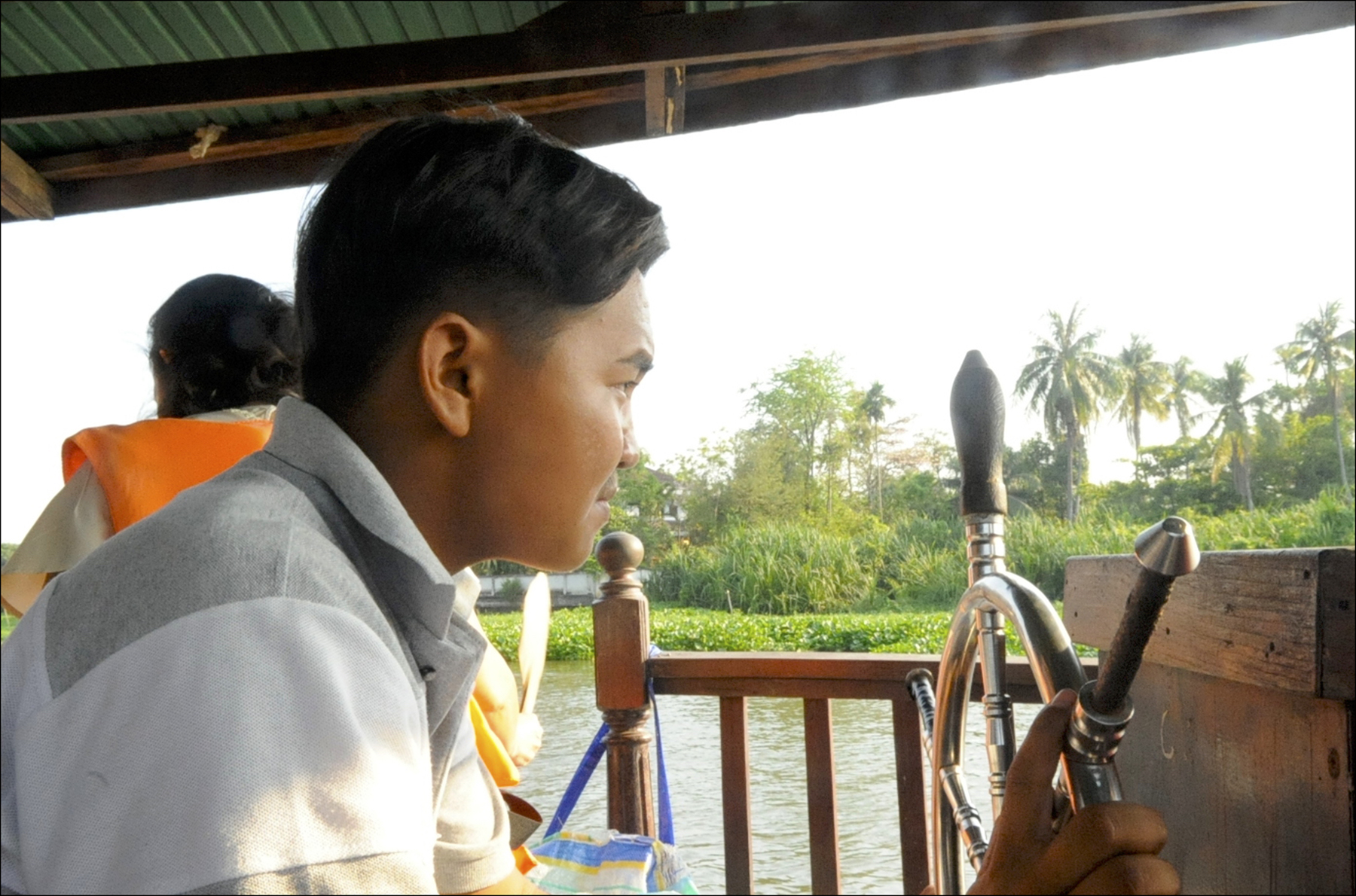 An employee of Thailand’s Sampran Riverside guides his passenger boat along the Tha-Chine River. (Larry Luxner)

Sampran currently buys around 700,000 baht (around $22,000) per month of organic produce from farmers, most of them located within a 60-km radius of the resort. He’s also connecting organic farmers to Thailand’s growing meetings and incentive travel industry, selling 300 tons of organic rice per year to 19 hotels and three convention centers.

“Most rice comes from the mill with 20 percent broken rice, which cannot be sold to exporters. So why not mix full-grain rice with broken rice and sell it to hotels?” he said. “The hotels don’t really care when you put it in a buffet line.” 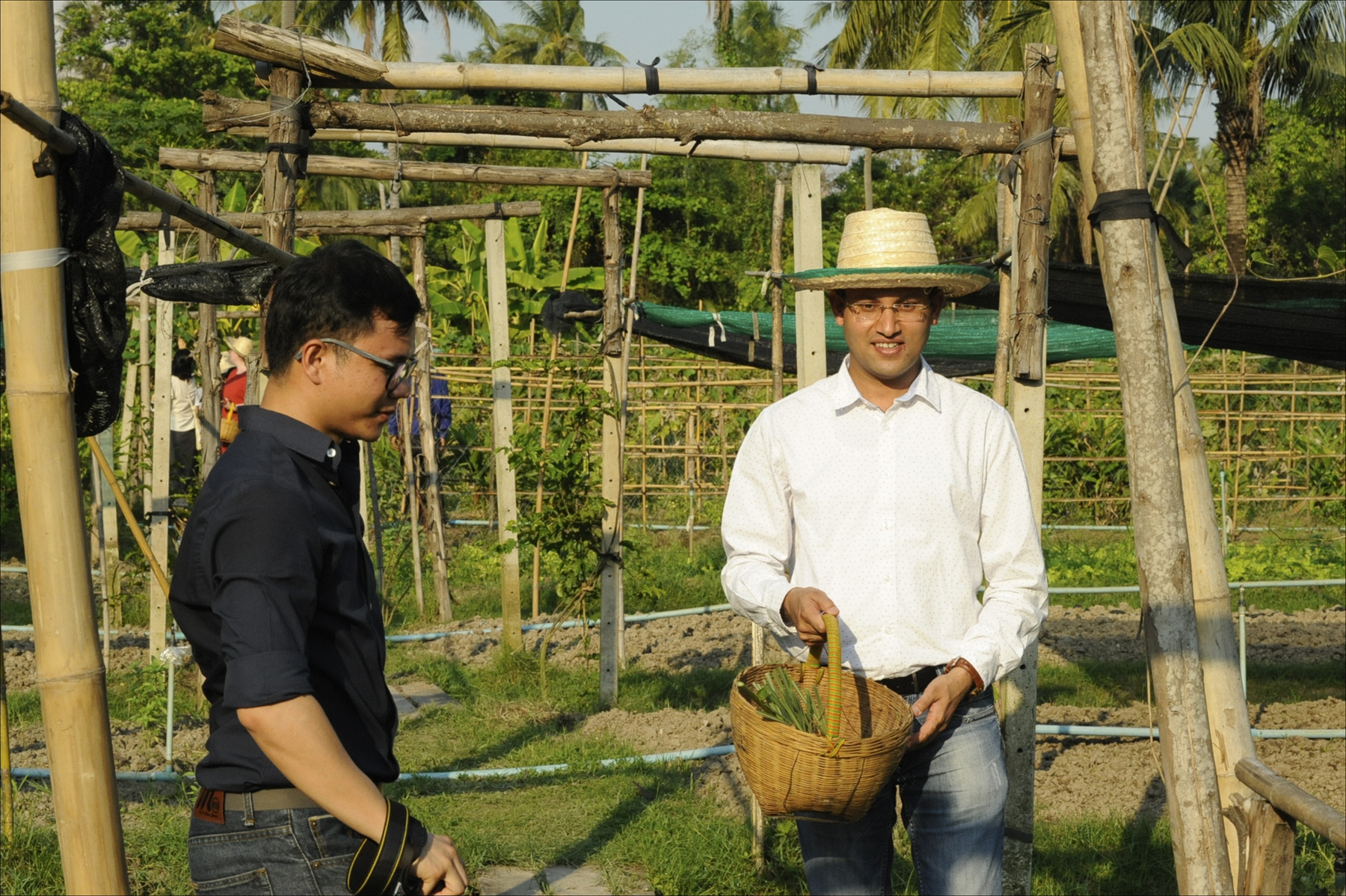 Nawaraj has also opened a Bangkok outlet, Organic Living, where tourists and locals can enjoy pesticide-free food and snacks. But he spends most of his time in the field, working with 12 groups of local farmers.

Besides making money by offering his hotel guests a range of organic products from lime soda to mojito cocktails, Nawaraj says his ventures make him feel like a good corporate citizen too, adding that “I view what I’m doing now as a social movement that benefits my traditional business by empowering farmers.”