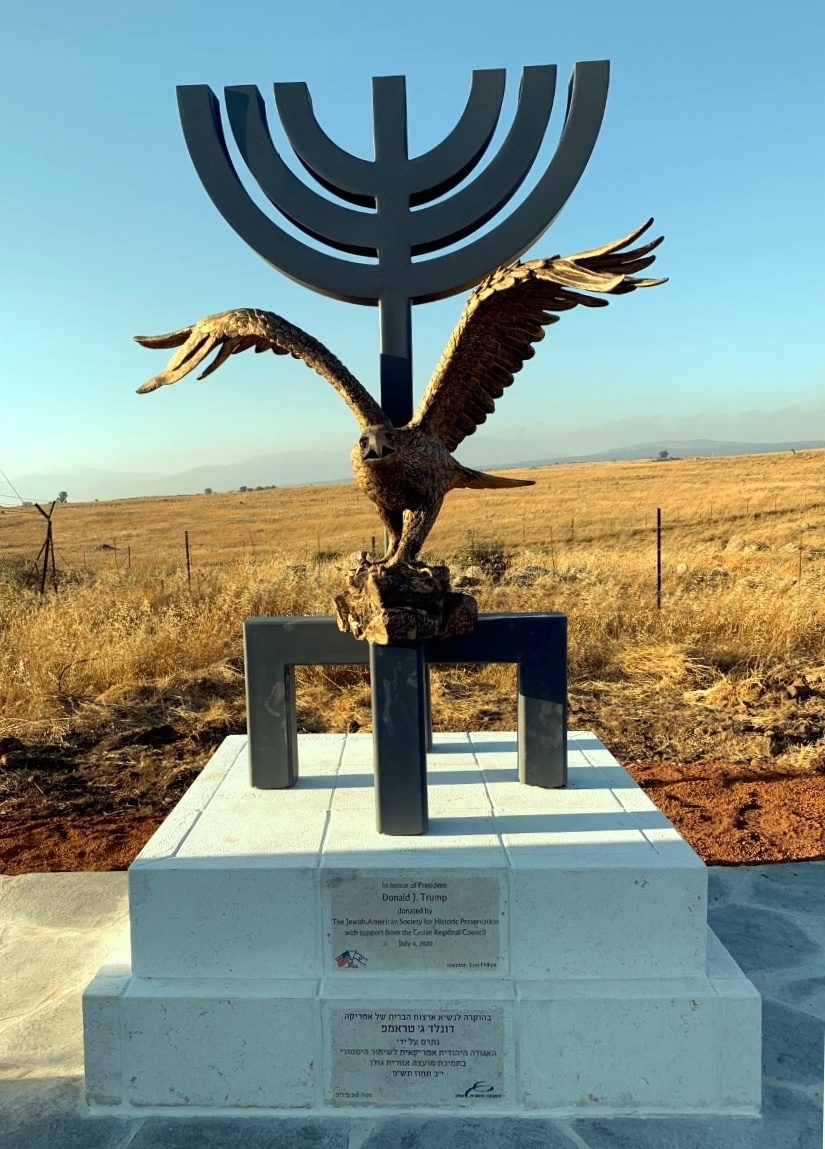 From the Facebook page of the Golan Regional Council.

“A magnificent new sculpture was donated and placed near the entrance sign at Trump Heights. The sculpture models the Menorah, and the biblical Golan Eagle depicted in the 5th-century Golan synagogue of “Ein Keshatot”.

The Golan Eagle is symbolically linked to the American Eagle. The Eagle represents the bonds of shared values, commonality, and the alliance between the peoples of Israel and the United States.

Jerry Klinger, the founder of the Jewish American Society for Historic Preservation, donated the sculpture, and the platform.

The donation is in honor and appreciation of Donald J. Trump, President of the United States of America for his historic recognition of Israel’s sovereignty over the Golan.

The sculpture is the creative work of internationally noted Israeli artist, Sam Philipe…

When I was first approached about funding a sculpture at Trump Heights by noted Israeli sculptor Sam Philipe, I was a bit reticent.  Speaking favorably about President Trump has placed me on many Jewish American enemy lists.

American Jews, fortunately not all, are virulently anti-Trump. To speak fairly, honestly, and God forbid positively about the President brings the Jewish lynch mob to the door with their White Sheets and Pointy Hats.

I did not want to seek trouble. Yet, I could not not say Thank You to a friend of the Jewish people and of Israel.

Ani Modeh Lecha is Hebrew. It is superficially translated as Thank You.  It is a poor translation. The Hebrew meaning is much deeper. It should be translated as I am indebted to you, Thank you. You have done something for me that I could not do for myself.

Saying Thank You to President Trump terrorizes many Jews.  Anger is the word most would have expected, but it is really terror.

Their terror comes from their unadmitted realization of change that was happening even before Trump was elected. Trump did not cause the change.  Liberalism, the God most American Jews chose in the 1960s to replace the silent God of the Holocaust, was failing.  Antisemitism, reverse affirmative action, base discrimination measured not by a Jew’s character but by his existence blossomed with mainstream media’s complicit silence.  Jewish Liberalism blamed the extremism on the right while remaining fearfully silent about the hatred bubbling beneath their feet from the left.  It is P.C. to blame the right for hate. It is dangerous to blame the left.

I agreed to fund the sculpture but only if it could be dedicated in honor of President Trump.

What is honor? A former friend, I hope she will remain a friend, an American Jew told me, Trump has no honor.

All Presidents including President Trump made many promises. They all were and are men of good intentions

Men with honor, keep them.  What angers so many, President Trump keeps his promises.

Honor isn’t given it’s earned.  Sometimes it requires standing for what is right…  even if means standing alone.

Proverbs 3:27 Do not withhold good from those to whom it is due when it is in your power to do it.

A recent list was composed, twelve reasons to support Trump.

It is obvious today, the Iranians never intended to stop their march towards a nuclear bomb and their dream of death to America, to Israel, death to the Jews.  They used the pallets of money provided to them, a bribe is a better term, to further their goals and to promote an expansion of worldwide terrorism.

There is no obligation to commit suicide to make those who wish us dead feel better.

Should President Trump lose in November, the left will demand the defunding of the U.S. military.

Is it Politically Correct to say Thank you to President Trump who has done what no other President would do?

It may be Politically Incorrect to do so, but it is the right thing to do.