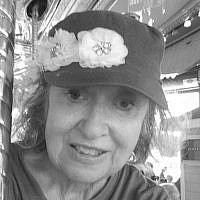 The Blogs
Helen Weiss Pincus
Apply for a Blog
Advertisement
Please note that the posts on The Blogs are contributed by third parties. The opinions, facts and any media content in them are presented solely by the authors, and neither The Times of Israel nor its partners assume any responsibility for them. Please contact us in case of abuse. In case of abuse,
Report this post.

The village of South Branch had a general store and a Dutch Reformed church. The general store was the post office, gas station, and soda fountain. On Shabbat mornings my mother, my younger brother, Nathan, and I would walk to the post office to check the mail. It was about a mile, passing few houses and one large field sometimes filled with corn.

We walked there to look at the mail, to peer through the envelopes and see if any checks had come m. We couldn’t open the envelopes, because it was Shabbat – or, in those days, Shabbos. We were living close to the edge financially and every check was important. The checks were sent by people who had been guests at our hotel. My parents, post- Holocaust Orthodox Jewish immigrants from Europe, owned a small kosher hotel in the middle of a WASPy rural enclave. We named it the South Branch Hotel, but it came to be known as Weiss’ Farm.

Working incredibly hard, my parents eventually attained a measure of financial stability. My father loved America. He treasured the way people were not identified on the news by race or religion. He cherished the friendliness of the people in South Branch, who smiled at us and treated us as equals.

We did not experience much anti-Semitism – occasionally the hotel sign would be stolen; sometimes our mailbox would get blown up (after the post office was eliminated). But these were more like pranks – malicious, but still just pranks – aimed at everyone in the village. Blowing up mailboxes was a popular pastime; we might have felt slighted had ours been ignored. But now and then people would drive by and yell anti-Semitic slurs. We ignored these – it was still so different from Europe. Our front lawn was very big. We heard them; we knew what they were saying, but we could ignore them. We were safe. We were in my father’s beloved America.

One evening when my older brother, Abraham, was in high school and already quite tall and strong, a car went back and forth, over and over.

“Dirty Jews!” yelled the people inside the car. “Dirty Jews! Dirty Jews!” Again and again. My father caught my brother’s eye. “Let’s get them,” my brother said, fueled by the same impulsivity that had saved my father’s life in Europe.

Fortunately, they did not catch them, but as they chased the car down the dark, twisting country roads, they got close enough to read the license plate. My father called the police. This was America.

What were the police in this small town going to do for the little foreigner, complaining in broken English about a few kids just having some harmless fun?

The police loved my father. He donated as generously as he could to all local charities, never got into trouble, and had a way of talking to people that made them feel respected. The police found the kids and asked my father if he wanted to press charges. The driver had a suspended license. My father said no, he just wanted to talk to them.

The slightly defiant, slightly shame-faced youths came into our threadbare but very clean home with the police. There were three of them.

“You see,” my father, who had never read Shakespeare, said in his beautifully accented English, “that we are not dirty. It hurts us when you say that. We are not dirty. We are not so different from you. Do you see?” For him it was that simple.

Subsequently, those boys worked in a gas station that my father frequented.

Every time my father stopped there, his windshield was washed, his car polished; they even wiped his tires. Then they fought over who would fill the gas tank.

About the Author
Award-win­ning jour­nal­ist and free­lance writer, Helen Weiss Pin­cus, has taught mem­oir writ­ing and cre­ative writ­ing through­out the NY Metro area to senior cit­i­zens and high school stu­dents. Her work has been pub­lished in The New York Times, The Record, The Link, The Jew­ish Stan­dard, and oth­er pub­li­ca­tions. She recent­ly added ​“Bub­by” to her job description.
Related Topics
Related Posts
Comments