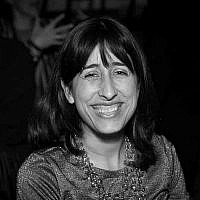 The Blogs
Pesha Fischer
Apply for a Blog
Advertisement
Please note that the posts on The Blogs are contributed by third parties. The opinions, facts and any media content in them are presented solely by the authors, and neither The Times of Israel nor its partners assume any responsibility for them. Please contact us in case of abuse. In case of abuse,
Report this post. 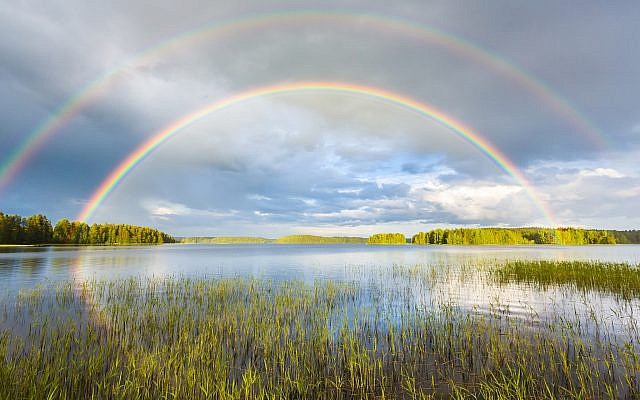 Illustrative. Midsummer rainbow in over a lake in Finland. (iStock)

Somewhere over the rainbow, during Bein Hashmashot, the time “between the suns” — twilight — the rainbow was created. At least according to the Mishnah in Avot 5:6.

The rainbow does not appear on our radar until this week’s parsha, where it serves as a sign of the covenant between G-d and mankind that the world should never be destroyed by flood again (Genesis, chapter 9).

And G‑d said to Noah and his sons: I will keep my covenant with you and your descendants… and never again will a flood destroy all life, and there will not be another flood destroying the earth…. This is the sign I am making, testifying to the covenant between Me and you and all living souls, forever.

If you ask any little girl about the most drawn phenomena of nature — after unicorns, that is — the answer would be rainbows. While writing, I asked my fourth grader when she had last drawn a rainbow. Only a couple of hours before our conversation.

But our relationship with rainbows is complicated. On one hand, a rainbow is beautiful phenomenon of nature that gives us a chance to say a blessing: ברוך אתה ה’ אלוקינו מלך העולם זוכר הברית, (ו)נאמן בבריתו, וקיים במאמרו Blessed are You, Lord our G‑d, King of the universe, who remembers the covenant, and is faithful to His covenant, and keeps His promise.

On the other hand, we read in the Gemara in Chagigah 16a that looking at a rainbow shows that you do not care about G-d’s honor and it would be better if you had not come into the world. The Gemara also warns that if you look at a rainbow your vision will dim. This is quite a harsh perspective, especially in contrast to how the modern world regards rainbows today. So how do you make a blessing: without looking at a rainbow? And how does looking at a rainbow mean you are degrading G-d’s honor? Why does this beautiful phenomenon even happen?

Rainbows, despite the feeling that they are almost within our reach, are not at a specific distance from the viewer. They are an optical illusion, almost like magic, caused by water droplets viewed from a certain angle relative to a light source. “Primary rainbows,” what we call a regular rainbow, has red on the outside of the arc and violet on the inside. Double rainbows have the opposite color order because light is reflected twice on the droplet of water before leaving it. Iridescent Clouds, also called rainbow clouds, occur when sunlight diffracts (bending  around an obstacle) off water droplets in the atmosphere. These are not the only types of rainbows by far, but they are the ones that are relevant to our discussion.

Can we make a blessing on any rainbow we see in nature? The halakhic literature probes this question. The author of the Shulchan Aruch, the classical code of Jewish law, seems to think that as long as you see part of a rainbow, a blessing is mandated. R. Yisrael Meir Kagan, author of Chafetz Chayim, is unresolved as to whether a part of the rainbow is sufficient to require the blessing, or if you need to see the entire arc. The Ben Ish Chai, a noted Sephardic authority, cites another work, the Ya’arot Dvash, and explains that there are two types of rainbows: one that is created next to mist-filled clouds and sunlight (this is the rainbow that we normally see), and another, which is bluish in color. It is the bluish one that recalls the destruction left by the flood. The distinction between these two rainbows is great enough that he recommends making the complete blessing only open seeing the bluish rainbow; when one sees a regular rainbow, one should recite the blessing without G-d’s name.

How do we understand the edicts of the Gemara about harm befalling one who beholds a rainbow? There seems to be some superstition and fear surrounding the sighting of a rainbow. The medieval French scholar Rabbi Yosef of Dampierre, author of the Tosefot HaRid, explains that just as it is hard to tell where each color of the rainbow begins and ends, so too we cannot understand the breadth of G-d’s greatness. We show this lack of understanding symbolically by not looking at rainbows. But if we are not to look at the rainbow how can we ever recite the blessing said upon seeing a rainbow? Other rabbinic authorities (Shulchan Aruch and the Rosh, quoted in the Abudraham) clarify the point, contending that you can look briefly at a rainbow, but not gaze at it, staring for a long time.

In our current world of social media, whenever a rainbow is spotted in the great outdoors, Facebook displays a startling number of rainbow pictures, uploaded by enthralled (amateur) photographers. Rabbi Yisrael Meir Kagan would have cringed at this sharing of rainbows — citing the work, Chayei Adam, in his Mishnah Berurah (229:1): If you see a rainbow, do not tell your friends; just say the blessing to yourself.

From this perspective, the rainbow is seen negatively, such that telling a friend about would be akin to being the bearer of bad news. For the Mishnah Berurah, rainbows are a reminder that mankind — indeed, the whole world — had been worthy of destruction.

But not everyone is a Debbie Downer when it comes to the rainbow. Rabbi Dovid Yosef, son of Rabbi Ovadiah Yosef, writes that seeing a rainbow is a happy occasion because it reminds us that we should be happy that God is not destroying the world. He adds that we should certainly let our friends know whenever we see a rainbow so that they too can have the opportunity to praise G-d. Perhaps Rabbi Yosef is relying on the opinion of the medieval sage, Rabbi Moshe ben Nachman, Ramban, who explains that the rainbow is shaped like an archers bow, which symbolizes that G-d is firing the arrows away from us. Just another example of Sephardim being happier and more positive than their Ashkenazi brethren.

How do we balance our love for these colorful arches of the sky with the many opinions that rainbows should invoke fear? Rainbows are magical. They take boring white light and show that it is full of color. The color cannot be seen on a regular basis, but only just after a storm. Often right after a crisis, whether national or individual, we are blessed with seeing the beauty in individuals as they overcome the storm and push their own light through. It is during these times that we are able to see the extraordinary colors in ourselves and in each other.

May this year be a rainy one, full of many rainbows that we can share with our friends. May we use them as a way of appreciating G-d’s greatness, as well as the color in ourselves and in our friends.

About the Author
Mrs. Pesha Fischer has been teaching Halacha and Tanach to students of all ages for the last 18 years. She has also created an after school science program for elementary age children in Modiin. For the last 11 years, she has been teaching students in gap year programs in Israel and teaching bridal classes both in Israel and abroad. She currently teaches at Midreshet Amit and Machon Maayan. Prior to her aliyah, Pesha worked as a Campus Torah Educator at the University of Maryland and was Judaic studies coordinator at Yavneh Academy of Dallas. Pesha has studied at Midreshet Lindenbaun and Matan and received a Masters degree in education from Yeshiva University. She lives in Modiin with her husband Rabbi Elli Fischer and their four children.
Related Topics
Related Posts
Pesha Fischer
Comments