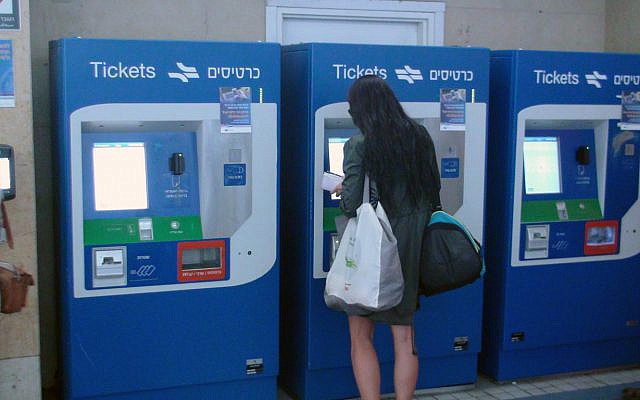 This may not seem like a big deal, but I realized something huge when I tried to buy a ticket at the Ramle train station with an old and crumpled 20 shekel bill.

Ever try to put paper money through a machine in America? A one-dollar bill or five-dollar bill?

What happens 50 percent of the time?

The machine spits it out.

And then you’re standing there putting it back in again and again while people stand in line silently judging you and your worn-out money.

That is how it is — maybe it’s changed since I moved to Israel, but what I remember is American machines are persnickety, they don’t take no nonsense from nobody, they are organized and they expect you to be, too. One little wrinkle and the machine is all like, “Sorry, not sorry,” and spits back your money and then you’re stuck there asking random people if they have change and they’re all like, “Naw,” and you hit up a change machine, but good luck with that.

I swear, for me, it wasn’t even 50% of the time – it was way more, even, because I am That Girl with the worn-out money.

Anyway: I’m at the train station in Ramle and I need to buy a train ticket and I’m digging through my pockets for loose change – ticket costs 11 shekels and I know I have it somewhere. I have six shekels in coins and a 20 shekel bill.

This 20 shekel bill was chased by a dog and got hit by a bus on the way to Eilat and then floated in the Dead Sea.

It got singed by a Hanukkah menorah and still has a poppy-seed stain from two Purims ago.

Plus, it got crumpled in a ball and I take it out and try to smooth it, and there’s this line of people and I’m all nervous and I just KNOW I’ll be standing there trying to feed it into the machine, but I am an optimist goddammit so I try it anyway:

I damn near dance the horah.

In America, the machine would have literally said, “Ma’am, I’m sorry, you can’t do that, but have a nice day,” and then called security and had my ass hauled out of there for trying to put in such a used-up, life-spent bill, but the machine here in Israel is like, “Hey, wassup, didn’t we smoke hookah over in the shuk last week?”

Everything here is done by the seat of our pants – we suck at long-term strategy, but are great at building stuff with duct tape.

We suck at making plans, but can have the best night ever on the spur of the moment.

We are not organized, but within that chaos, the sun shines brighter and the night air is sweeter and everything tastes better, and, trust me, skinny dipping in the middle of the night even when you have to be at work three hours later is the way to be.

We may be rude and bump into you, but it’s just because we don’t have time for bullshit.

We are a country of people who have been through the wringer – each one of us is torn and wrinkled. We’ve been crumpled up and passed hand to hand to hand, but the best thing is we have these stories to tell, and everything goes here – for better and worse — but it is never boring and all of us – allllll of ussssssss – messed-up people belong and are worth something.

Still, I stand there grinning like a damn fool and I say with real joy: “Wow, I can’t believe it!”

“What’s not to believe? You bought a ticket. Kol hakavod,” the guy behind me says with a shrug and rolls his eyes. “Now move, lady, we got a train to catch.”