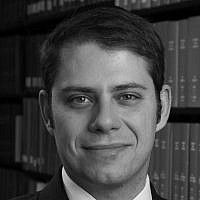 The Blogs
Eugene Kontorovich
Apply for a Blog
Advertisement
Please note that the posts on The Blogs are contributed by third parties. The opinions, facts and any media content in them are presented solely by the authors, and neither The Times of Israel nor its partners assume any responsibility for them. Please contact us in case of abuse. In case of abuse,
Report this post.

Israel’s new government is considering reforming the “grandparent clause” in the Law of Return. That original law of return was adopted in 1950 and is part of Israel’s foundational principles. It allows anyone who is Jewish or has a Jewish parent to receive citizenship upon immigration. In 1970 that law was broadened to include people with only one Jewish grandparent, regardless of whether they were considered Jews under Jewish religious law, and it is that amendment that is being debated. Critics of the reform have resorted to provocative and dire rhetoric, describing the provision as an extreme measure that will explode relations with the Diaspora. These critics are seeking to weaponize diaspora communities against the reform – and are relying on several misrepresentations about the proposal.

The first myth is that the amendment would change Israel’s definition of who is a Jew, disqualifying people currently considered as such under Israeli law. This is simply not true: the grandparent clause does not relate to the question of “who is a Jew,” the status of Reform conversions, or other sensitive topics. That is because the 1970 amendment does not define the patrilineal grandchildren of Jews as “Jews,” but rather specifically as non-Jews who are nevertheless included in the Law of Return. The amendment made no change to determinations of status, nor would its removal.

A second myth is that the amendment would be an insult to American Jews, or dampen American Aliyah. This is entirely baseless fear-mongering – the only reason the amendment would harm such ties is because of the dishonest incitement against the law. Tens of thousands of Jews have made aliyah from the US in the past decade – and only sixty-seven of them did so under the grandparent clause, according to new research by my colleague Dr. Netanel Fisher. Many of those 67 would have been independently eligible for citizenship through other family ties.

One could count on one hand the number of Americans affected annually – well under one percent of American aliyah. Indeed, the proposed amendment is motivated largely by immigration from Eastern Europe. Nor was the 1970 amendment ever about pacifying the American Reform movement – which only embraced first-generation patrilineal descent in 1983. American Jews must stop centering themselves in this debate – not everything is about them.

Was Israel “unaccepting” of American Jews before the adoption of the amendment in 1970?

The proposed reform is hardly a cause for a crisis in relations, or making support for Israel “conditional,” as Abraham Foxman recently threatened – except for those already looking for an excuse to break up with Israel. Those fomenting antagonism between Israel and the Diaspora over this issue are in effect saying that they would not have supported Israel in its War of Independence or the Six-Day War.

Myth of the status quo

A third myth is that the amendment would undermine a stable status quo. To the contrary, it is necessary because of changed circumstances that have significantly changed the effects of the clause. The 1970 Amendment was never about defining Jewishness; rather it was the adoption of a lax immigration policy when doing so would have close to zero demographic effect.

In 1970, Israel was stuck in the War of Attrition, subject to a damaging boycott by all of the countries of the region, and completely surrounded by enemies bent on its destruction. It was economically stagnant, and facing substantial net emigration. The expanded definition would have little practical effect – witness the current numbers of Americans availing themselves of it even today. The provision was never expected to lead to immigration of people unconnected to Judaism in any way.

The massive improvement in Israel’s economic and security situation, combined with the collapse of the USSR, and now the war between Russia and Ukraine, has fundamentally changed all that. Today, the law is principally used by people from the former Soviet Union. Indeed, close to three-quarters of recent immigrants from these countries are not Jewish. The result of this in recent decades has been significant growth in a population in Israel that not only is not halachically Jewish, but much of which does not regard itself as Jewish.

Indeed, some of them are practicing Christians. Having one Jewish grandparent is today a poor proxy for any connection to the Jewish people (which is why immigration “facilitators” in the former USSR now coach clients to play up such a connection in interviews with government officials.) In fact, 40% of those who “immigrated” to Israel from Russia in the past year took their passports and immigration benefits and returned to Russia.

All of this undermines the status quo. Bringing en masse large non-Jewish identifying populations creates new pressure on Israeli laws that reflect the founding purpose of being a Jewish State. It has already resulted in pressure to change conversion standards. The outgoing government took steps to add an entirely new population category of “extended Jewish population” to cover people many of whom are not Jewish in any sense at all.

No one in 1970 envisioned the amendment as creating new census categories. To say that Israel may not amend this law is to say it cannot control its borders. It is simply unrealistic for an immigration policy adopted over a half-century ago to not need tweaking as migration and demographic pattens change. In a world of massive intermarriage – above 90% in some countries – as time goes on, many people will have a Jewish grandparent but little Jewish connection. The practical effect of the provision is to give citizenship rights to a large group of people with no connection to Judaism.

The grandparent provision is also frequently justified as allowing anyone who was persecuted by the Nazis to find refuge in Israel – the notorious Nuremberg Laws treated anyone with a Jewish grandparent as Jewish. However admirable this justification (though likely post hoc), it has also outlived its purpose a century after Nuremberg. To keep that definition now would be to allow Hitler to dictate Israel’s aliyah policy forever.

A final myth is that the amendment would harm relations with Israel’s large Russian-speaking community. Well over a million people have made Aliyah from the former USSR since it collapsed (and many before then), the vast majority of them in the 1990s. There is no evidence to suggest they identify strongly with those coming only now and who are eligible solely through the grandparent clause. What may be true, however, is that the amendment would harm those Israeli politicians who seek to draw political power from the new arrivals, and enlist them in a campaign against Israel’s traditional and Orthodox community.