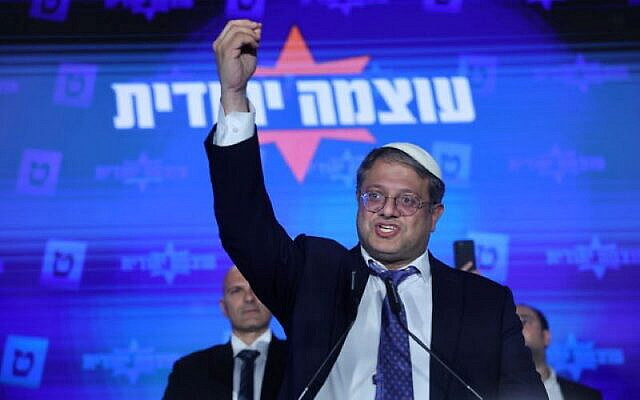 Itamar Ben-Gvir at his campaign headquarters following the announcement of the exit polls on November 1, 2022. (Yonatan Sindel/Flash90)

Those who are deeply disappointed by the Israeli election results are those who bought into the fallacy that the “government of change” was a center-left government.

Commentators and politicians are still busy providing explanations for the unexpected results of the Israeli elections and the dismal situation of the Israeli left, looking at voter turnout, surplus vote agreements, campaign strategies, party leaders’ behavior, alliances forged and alliances broken, motivation of different sectors and communities, and events that took place in the region in the days and weeks prior to the elections.

Politicians from the losing “change” camp and the fractured Arab sector are blaming each other. Labor Chair Merav Michaeli went straight for Yair Lapid’s jugular. Meretz Minister Esawi Freij accused Michaeli of having “delusions of grandeur” for refusing to run together, and party Chair Zehava Galon said Lapid had “played with fire” by assuring voters that Meretz was not in danger. The Arab party leaders rushed to blame each other for the breakup of their alliance, with one side claiming ideological differences while the other said it was all about ego. With little love between them even before the elections, Benny Gantz blamed Lapid for failing to “manage the bloc,” and Yesh Atid accused Gantz of fighting Lapid instead of Netanyahu.

Many are calling it a technical loss. These are the people who take comfort in the fact that the actual number of votes that the anti-Netanyahu camp got was greater than the pro-Netanyahu camp and that had Meretz gotten a mere 3,800 additional votes, it would have crossed the threshold and we might have been looking at yet another standoff between the two blocs. That may be true, but if you’re looking at the situation through the prism of left versus right, it’s irrelevant.  The deadlock that took us to the polls five times in almost four years was not about the conflict with the Palestinians. On that issue, the incoming Knesset constitutes an accurate reflection of where Israeli society stands and the values to which it adheres. Four seats for Meretz or for Balad might have influenced the look of the plenum but not the overriding spirit that pervades it.

Those who are deeply disappointed by the results are those who bought into the fallacy that the “government of change” was a center-left government.  In fact, despite progressive stands on issues like gay rights and gender equality, when looked at from the point of view of the Israeli-Palestinian conflict, which is the measure of left and right in Israel, it is a bit of a stretch to even call it center-right.  In fact, Meretz MK Mossi Raz described it as the most right-wing government in Israel’s history.

There is no reason for left-wing Israelis to be wringing their hands over the passing of a government under whose rule we witnessed the deadliest year for West Bank Palestinians since 2015.  It was a coalition that rested on the personal animosity between Netanyahu and Naftali Bennett, Benny Gantz, Gideon Saar, Avigdor Lieberman, and Yair Lapid. Had Netanyahu been removed from the Likud leadership, these party leaders would have gladly assumed their place in a Likud-led coalition rather than partner with the likes of Meretz and Ra’am. For those in need of a refresher, Benny Gantz launched his political career by boasting about how many Palestinians he had killed; Gideon Saar believes that Area C of the West Bank is Israeli territory that the Palestinians are trying to take over; Avigdor Lieberman has stopped talking about transfer of the Palestinian citizens of Israel but his party platform singles out only the Druze as deserving of equality; and Yair Lapid finally mouthed the words “two-state solution” at the United Nations but was quick to rid the statement of any significance by declaring that united Jerusalem will remain the capital of Israel forever.

As for Mansur Abbas, he joined the coalition in order to advance the domestic interests of his electorate in exchange for keeping a low profile on matters related to the occupation.  And let’s not forget that Abbas made no secret of his willingness to join a Likud-led coalition had the stars aligned differently in March 2021 and Netanyahu had put together the government.

Finally, we come to the Meretz party, which totally abandoned its ideology in the interests of achieving the “lofty goal” of keeping Netanyahu out of Balfour. For a year, Meretz MKs voted in favor of extending one law after another that the party had opposed throughout its history. After the government fell, instead of reviving its position as the moral conscience of the Knesset, Meretz ran a campaign that made “just not Bibi” its primary battle cry and trumpeted the number 61 (a Knesset majority) as its ultimate goal, no matter what compromises that achievement would entail.

In a message after the final results were announced, Galon said the right may have won this round but there is an equal number of Israelis on the other side who believe in equality, human rights, ending the occupation, and social justice.  Her desire to encourage her disconsolate supporters is understandable, but the Israeli public hasn’t been equally split on the issue of ending the occupation since the failure of the Camp David Summit in 2000.  In the end, the government Israel is getting is not a fluke resulting from the breakup of the Arab Joint List or Yesh Atid’s appeal to Labor and Meretz voters.  Israel’s 37th government is indicative of the ongoing progression along the spectrum from right to extreme right.

The youngsters who venerate Bezalel Smotrich and Itamar Ben-Gvir are the product of a society riddled with implicit bias and in which the majority instinctively equate “Israeli” with “Jewish” and are obtuse to the privilege they enjoy on the basis of ethnicity.  This is the painful fact that we must recognize if we are to halt the advance of the “Religious Zionism” phenomenon. What remains of the Israeli left – both Jews and Arabs — needs to stop rationalizing the results of the elections and join forces to challenge the assumptions that breed Jewish supremacy and run in 2026 on a joint platform of equality for all.

About the Author
Susie Becher is Managing Editor of the Palestine-Israel Journal, a collaborative quarterly published in Jerusalem; is Communications Director of the Policy Working Group, a team of senior academics, former diplomats, human rights defenders, and media experts who advocate for an end to the occupation and a resolution of the Israeli-Palestinian conflict; and serves on the Steering Committee of Zulat, an activist think tank advocating for human rights and equality in Israel.
Related Topics
Related Posts