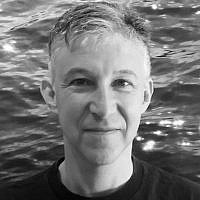 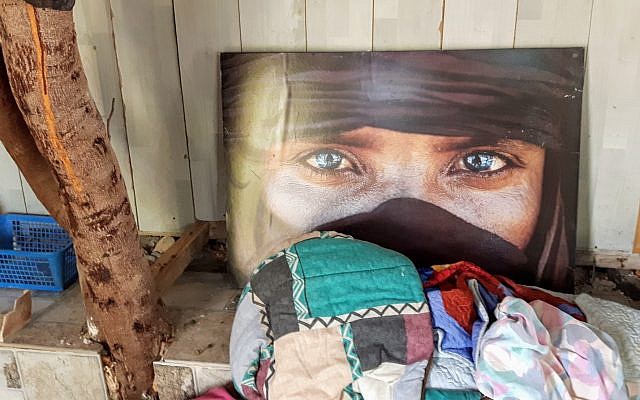 You never would expect in Thailand an anaconda, the world’s largest snake from South America, which crushes even large animals with its muscles, before swallowing them as a whole. But, always be ready for surprises.

My Palestinian Bedouin friend Ahmad waited for ten years for his US visa, and against all odds, he did get it. We’ll skip the period he spent in the US, though it was as dramatic as one could imagine, and continue with the arrival of his wife and kids in the Palestinian Authority. Yes, after six years in the US, and shortly after Ahmad obtained his green card, she and their four boys came back to the Palestinian village. Ahmad, who had returned earlier, anxiously awaited their homecoming. However, things didn’t work out well between them and they separated, not in the most civil way.

She once more took the children and didn’t allow them any contact with their father. Having paid for their return tickets and done his best to provide them with a house, food and monthly allowance, Ahmad was outraged. Though in this surrounding it would be common to arrange this kind of issues through the families, with a lack of male family on her side, and reluctance from his family, Ahmad decided to go to court. His main concern was that she would take the boys to the US. Once more, I became deeply involved. We went to the Sharia (family) court in the Palestinian town Abu Dies, and after going back and forth for hours between various offices, the judge signed a travel ban for the children, which we then delivered at the Palestinian police. We also contacted the US embassy, the one which just moved to Jerusalem, and in these exceptional circumstances, they were willing to release the passport numbers of the children. Since Palestinian borders are controlled by Israel, an Israeli lawyer was hired to get the travel ban approved by Israeli authorities. Everything seemed fine and the divorce was supposed to appear before a judge in a couple of days.

Gone with the kids

And then, on my way to Ahmad in the Palestinian town ‘Anata, his wife called: “Hi, please tell Ahmad that I’m in the US and that the kids are here and off to school.” I was in shock. How did she get out of the country? Highly aware of the fact that in this environment one kills the messenger when one is not pleased with the message, I contemplated what to do. I decided to take him apart and conveyed the message straightforward. He didn’t kill me, because he simply didn’t believe the information.

In the coming days, it became clear that the family did leave the country and thoughts of corruption came to our minds. Other ways had to be found to get hold of the children and more lawyers were consulted. In these interactions, Ahmad would tell the emotional story, whereas I would add the facts. Through Mussa, a friend of his with high standing, provisions were made to meet the chief of the police criminal department at his home, but somehow the meeting never took place. I then succeeded in convincing Ahmad to go to the police station. The clerk called the chief’s office, informing that we had arrived, and then told us that the chief is not there. When we did not give in and instead suggested to submit a complaint to some other officer, we were asked to wait. A little hungry, we went to the minimarket opposite the station. The place was new and did not yet offer much. Ahmad bought some sausage and pitta bread and made us a sandwich at the counter while telling the owner that he should have opened a kiosk. Back at the station, I recommended that the clerk call again, and this time we were allowed in. I went straight to the room of the chief, and there he was… Our acquaintance stemmed from a previous situation when he was in a lower function and had been instrumental in rendering my stolen cellular phone. He immediately came up to me, with hugs and kisses.

At the chief’s office, people were coming and going. The chief made numerous calls; not just related to our case. Though our lawyers had asked for some written statement by the police, we failed to obtain anything in writing, since the chief didn’t see a reason for writing an official complaint about the kidnapping. Moreover, he considered that – with the presently strained relations between the US and the Palestinian Authority – approaching Interpol would not be of much help either. He promised to figure out how wife and children could have left the Palestinian Authority, but advised that we take the case to the Israeli police. Being in doubt that Israeli authorities would be concerned about the fate of four Palestinian children, who are in the US under the care of their mother, I thought this latter approach was unlikely to be successful. We were a bit at loss, and I picked my brain for more ideas…  Ahmad’s mother in law had cooperated in not letting him see the children even when they were with her, and had later purposely hidden the fact that the family left the country. I never dreamt that I would suggest arresting an elderly lady for being an accomplice in the kidnapping, but that is what I did, in the hope that this could be helpful in bringing the kids back. The police chief promised to do so, but let’s see. We remained with the sense that some error in the system is being covered up.

Little story: On our way back, just near the Palestinian village Hizma, Ahmad’s brother informed him by phone that a letter from his wife’s lawyer had arrived with a request for alimony. I was still digesting this new piece of knowledge, when a car suddenly stopped in front of me (on the highway). I almost hit it. Less than hundred meters later, on the roundabout near the Hizma checkpoint, another car suddenly cut my way. Ahmad shouted something like ‘the animals’… Thoughts on Arab driving came to my mind. However, the first driver certainly didn’t look Arab, and was probably a settler, whereas the second one I didn’t notice, since it went too fast. Anyway, twice within one minute, I managed to evade a major road accident, and my neck was hurting because of my rapid stop.

I brought Ahmad to ‘Anata and drove on to see a few clients in Jerusalem at my clinic. Later, I would join him in a confrontation with his Israeli lawyer, who was supposed to answer the question of how possibly she could have left if he had ‘closed’ the borders. Mohammed, the one with the two houses, one of which was burned in the meantime, came with us. So did Mussa, who I mentioned previously and who was friends with the lawyer as well; Mussa’s brother joined the company. The six of us sat outside at a car wash in Al-Eizariya. There was a long and tense discussion and everyone shared his viewpoint. Occasionally, the voices raised. The lawyer, who had asked for a substantial sum of money, admitted to having said earlier that there is no concern and that the borders were closed, while actually, he had not verified that. He promised to find out what had happened… More thoughts on corruption came to our minds.

Ahmad was furious. He had believed that at least from the Israeli side, he could count on an honest system, and now – with failures on both the Palestinian and Israeli sides – he was left without children and little chance to do something about it. He shared his tough thoughts and emotions, while Mussa provided a description of his wife so that the lawyer would understand. “This woman is poisonous… poisonous. She is like an anaconda from Thailand. You know the anaconda from Thailand? She comes after you, kills and swallows you.” He opened his arms wide in front of him to show the size of her mouth. I couldn’t help grinning, which was completely out of place, but this level of drama I had not expected.

From there, we continued to Ahmad’s brother, Muhammad, to fetch the letter about the alimony. (I have written about Muhammad, during his time in administrative detention. Luckily, he is free now.) We met at his petrol station, in the village Al-Zaim, for which he tries to obtain a permit from the Israeli authorities, already for years.

The wisdom of Buddha and the hope for atonement

It was late and we were all exhausted. I took Mohammed (the friend, not the brother) and Ahmad back home. We’re near Khan Al-Ahmar, the Bedouin village threatened by demolition. Suddenly, there is a donkey lying on my lane just ahead of me, and at the other side of the road a broken car. We stopped, and Ahmad helped the donkey back on its legs while making a remark about the drivers, who were only concerned about their car. Someone less careful than I would have hit the lying donkey and probably killed it. The donkey seemed not badly hurt and continued wandering… 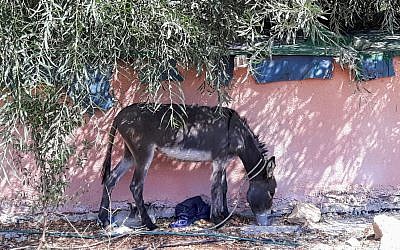 Back in ‘Anata, Mohammed and Ahmad went to have a shawarma. In the meantime, I bought some food for Anthar, the cat, who deserves a blog post by itself. We then sat together for a couple of minutes, under the beautiful eyes of this veiled man in the picture. We had some coffee and tea, and I was a bit disappointed that Anthar had preferred the shawarma over cat food. While I could hardly keep my eyes open and pondered about anacondas in Thailand, Ahmad talked about nirvana, the wisdom of Buddha, and his hope for atonement.