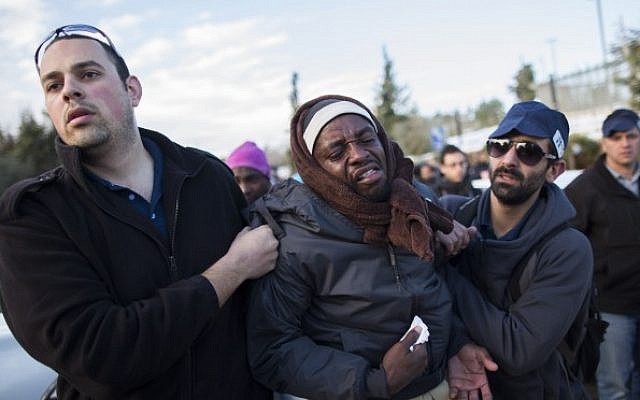 Sudanese refugee get arrested by immigration police in front of the Knesset after marching towards Jerusalem from the south in protest of the new "Holot" detention camp for illegal migrants, on Monday, December 17, 2013 (photo credit: Yonatan Sindel/Flash90)

“Kan ya makan (It happened, or it didn’t happen).” That is how Arabic speakers would start a story like this one, that took place (or not…) in a small community in the Judean Hills more than a decade ago. Members of the 70+ family community were asked to take in about 10 Sudanese families with young children.

The families were among hundreds of asylum seekers left by the Beersheva Municipality on the lawn of the Rose Garden in Jerusalem opposite the Knesset. This was an act of protest on the part of the desert city of Beersheva. The relatively impoverished town could no longer cover the costs of accommodating the asylum seekers in a hotel rented for that purpose and the national government had failed to provide any assistance. The asylum seekers camped on the lawn for several months before buses appeared lining the sidewalk, and they were told they would be leaving the next morning for who knows where — probably Ketziot Prison.

Non-profit aid organizations asked the small Judean community to take in the families with children under five before nightfall. The organizations told community members that the UNHCR UN refugee organization had initiated proceedings to grant these families refugee status, but they were nonetheless scheduled to be bused out of the garden at dawn. The organizations and the community turned to me for help because of my experience in providing nursing care to unusual populations.

The community displayed incredible organization, pluck, and generosity in swiftly turning an empty kindergarten into a relatively comfortable shelter. Mattresses, blankets, food, toiletries, toys, and offers of help appeared within an hour, and community members set forth in their own cars to transport the families.

A minority of the community’s members vocally objected to housing “illegals.” But in classic Israeli homa umigdal wall-and-tower style, facts were created on the ground. The sight of adorable children playing in a kindergarten that had been empty too long seemed to transform the objectors’ outright anger into disgruntled tolerance. Anyone who has lived in a community this size knows how this works. In any case, the asylum seekers were told to remain within the kindergarten grounds to avoid irking these members further and to avoid being rounded up by immigration authorities.

The next morning, I arrived to see how the families were faring, only to discover that the notoriously shabby and neglected kindergarten and surrounding grounds were newly spic and span. The yard had been swept and raked and you could eat off the floor inside. The families were cooking and doing their best to wash up in the kindergarten’s small sink and with the help of hoses out back. My husband, who some of you know is a journalist, offered to empty their trash every day before going to work at Haaretz and to build them an outdoor shower. I am prouder of that shower than I am of anything he has ever written — and believe me, he’s no slouch in the writing department.

But days later, I received phone calls from community members who told me that they would be happy to let the families shower in their homes, and a rotation was set up so that none of the community members would be short-changed. There were not enough Sudanese families to go around to those who offered hot showers, plush towels, and luxury bath products. The grumblers were, of course, among the first to open their homes and hearts.

The hosts lacked a common language with their nightly guests, and it was not long before they asked me to use my limited Arabic to learn more about these families and ask if there was any other help that they could provide. I had invited my favorites to shower in my home. I asked them.

Those of you who read my blog know that I am a child of Holocaust survivors. Imagine how stupid and embarrassed an adult 2G woman felt when a 20+ mother, who had been bathing her 2-year old and 6-month old boys in my tub for more than a week, said the following:

“Of course! Where does she live?” I asked.

“She lives in Utah. She was brought to the United States by a Christian community.”

There wasn’t a dry eye in the house as my family and I handed over the phone that we used to call the US nearly every day and listened to her trying to get out the words to her sister through choked tears.

I spread the news throughout the community: Duh. What they want most is to talk to their families.

The scene of crying Sudanese families calling loved ones around the globe to say that they were alive, well, and had children was repeated in all the other homes hosting families in the community. The ice was officially broken. The families were more than welcome. Community kids played soccer with their little ones in the yard. Impromptu Hebrew and English lessons were offered to those who hoped to seek work. Families were invited for meals on Shabbat. And the UNHCR handed me their refugee papers to distribute to them. Yes, the daughter of survivors got to hand out papers to someone who needed them. Cue the violins.

But what about the flag, you ask?

Days later, an Israeli flag appeared hoisted onto a pole in the yard in front of the kindergarten.

I got phone calls again, and an “emergency” meeting of those helping the families was assembled.

“Who hung the flag in front of the kindergarten?” asked the Left-leaning members of the community. “Are we trying to shove it down their throats that Israelis are helping them, when the country isn’t helping them at all.”

“Who hung the flag in front of the kindergarten?” asked the Right-leaning members of the community. “Are we trying to give them the false impression that they are welcome in Israel? That the temporary help we are offering them indicates that we are in favor of them staying here forever.”

“Who hung the flag in front of the kindergarten?” I asked the families.

“We did,” they answered.

“We brought it with us from the Rose Garden when we came here. There were many flags lining the street next to the Knesset. We thought it was OK to take one.”

So now it’s almost Yom Haatzmaut, and I’m reading many fine and legitimate blogs and posts from politically like-minded friends questioning whether they can bring themselves to fly the flag on Israel’s 70th Independence Day. Whether they can celebrate when the nation is holding millions in a brutal siege in Gaza and threatening to forcibly deport tens of thousands of asylum seekers to horrific and life-threatening conditions in so-called third nations that don’t want them.
I’ve asked the same questions.