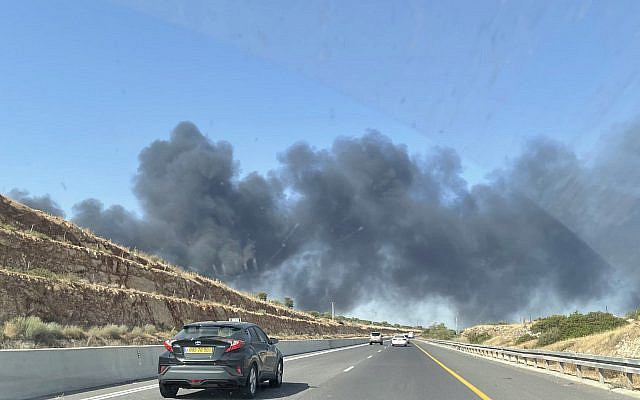 As we neared Tiberias, the smoke billowing towards the sky was so thick it blocked the sun. There was a fire in one of the communities near our destination of Katzrin. Even with the fire’s haze affecting the blue sky, the beauty of the Kineret wasn’t hindered. We stopped for a family photo on the side of the road, much like we do on our trips to America. We were all anticipating what the Shabbat Bris up north would bring. Would our hosts have enough space for all six of us? Would they have enough food? What would the community be like? Only time would tell.

I connected with the baby’s father through a friend and former client who lives in Katzrin. My friend was gracious enough to host my entire family. This was the first time we were able to do this. Usually I embark on these adventures alone but it’s always better to be with your family for Shabbat.

As tends to happen with out-of-town Britot, I knew little information about the family before my arrival on Friday to check the baby. As I was waiting in the living room, I struck up a conversation with one of the eldest daughters. She was happy to talk and I was taken by her positive disposition. As it turned out she wasn’t only excited about her newborn brother’s upcoming Brit Milah. “Tomorrow is my Bat Mitzvah,” she remarked. I was flabbergasted. Well, that would explain why the Bris was scheduled for 5pm on Shabbat afternoon. After all, we don’t mix Smachot.

On Shabbat morning we davened with an eclectic Kehilah. It was inspiring to see so many people from so many different walks of life finding common ground to pray together.

All I had heard about the greater community before arriving was there was a mohel in town. This knowledge always gives me pause because I fear I may step into a ‘political pothole’. But our experience couldn’t have been more pleasant.

At the Kiddush after the service the community was so welcoming. Everyone was excited to meet anyone new in their midst – and it seemed disconnected to the role I had come to perform. The caterer for the Bris even offered to bring me homemade cinnamon raisin bagels that evening, one of my beloved foods I miss from the old country.

The afternoon passed and we made our way to the event. The Bris was being hosted at one of the community member’s homes. It seemed as if the entire neighborhood was there. It was odd to see so many people gathered without masks.

After some minor preparations, we were ready to begin. I have the custom of chanting Nigunim throughout the ceremony. It helps to calm people’s nerves as well as add an additional spiritual element to the already emotion-laden event. But at this particular Brit Milah I had to sing at the top of my lungs to quiet down the chatter. There was a great deal of excitement in the air.

The moment of naming arrived with little fanfare. “He shall be called in Israel, Nachson.” Not one of the more common names but one that’s near and dear to my heart. The biblical Nachson is known for taking the leap of faith into the Reed Sea. He walked as deep as his mouth and almost drowned before God split the water so that B’nei Yisrael could cross over rather dry land.

The ceremony traditionally ends with the Mourner’s Kaddish when a minyan is present. We certainly had more than a quorum and Kaddish could have been said. It had been a long time since I presided over such a large event. Due to COVID-19, most of my prior Britot were as small as just the parents and everyone else on Zoom. So when the time came for Mourner’s Kaddish I forgot to call it out. One of the attendees was in his year of mourning and asked “Kaddish?” So there was a bit of a speed bump at that moment. But in the end, Kaddish was recited. During the traditional meal, the family made a big to-do for the sister’s Bat Mitzvah, bringing her cake out for dessert. As it turns out, sometimes we do mix Smachot.

On our walk home I remarked to my friend that I couldn’t believe I forgot the Kaddish. I’ve only been a mohel for over ten years. He mentioned that this was the community’s first big event since the lifting of the COVID restrictions. This explained the palpable excitement at the inception of the Brit.

That’s when I realized I wasn’t the only one who needed to get reacquainted with large events. It was a sort of first for the community. It’s interesting how these things work out because this Nachson was my second first, if you will. I was the mohel for only one other Nachson in my career. He was the first Bris I ever did. It felt like the whole experience was sort of a homecoming.

I was so honored to be at the helm of the community’s return to normal. It’s just one of the many surprises that sometimes come with meeting people at these liminal moments.

May we all only know heavily attended Smachot.

About the Author
Hayim Leiter is a Rav and a mohel in Israel , as well as an activist, and a Jewish educator. He founded Magen HaBrit, an organization committed to protecting both our sacred ceremony of Brit Milah and the children who undergo it. He made Aliyah in 2009 and lives in Efrat with his wife and children.
Related Topics
Related Posts
Comments
Advertisement