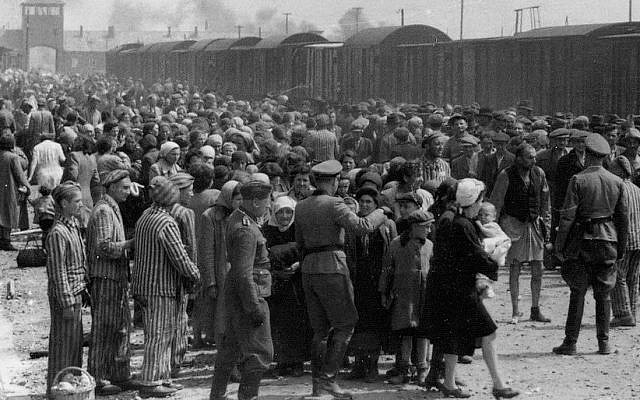 Although Europe, fortunately, has not known full-fledged war since the end of the twentieth century, it is the main scene of a battle going on today. It is a battle for memory and about the history of the Holocaust and events of the Second World War. This battle is playing out on several fronts, but with at least one clear common denominator: history is frequently being manipulated and whitewashed for political reasons.

The most recent newsworthy skirmish took place in France, where Marine Le Pen declared that “France was not responsible for the Vel d’Hiv.” This is perhaps the most infamous raid on French Jewry. Early in the morning on July 16, 1942 some 4,500 French policemen started to arrest foreign Jews living in Paris. More than 11,000 were arrested that day, and confined to the Velodrome d’Hiver, known as the Vel’ d’Hiv, a winter cycling stadium in Paris. They were held in atrocious conditions. Within a few days, the number of Jewish incarcerated had grown to 13,000, including about 4,000 children. From the Vélodrome d’Hiver the Jews were sent east to Nazi extermination camps by way of French transit camps. Le Pen presents what has come to be known as “alternative facts,” in other words a totally ungrounded version of events that seeks to whitewash the role of the French in this deportation and subsequent murder of Jews, so as to place all of the onus on the Germans.

Le Pen, of course, is not the first and probably will not be the last public figure to try to relieve her nation of responsibility for its role in the Holocaust and shift it to the shoulders of the Nazis. This is certainly a central theme in the discussion about the Holocaust and Second World War in Poland. The Polish president Andrzej Duda has denied that Poles took part in the murder of their Jewish neighbors in Jedwabne. In this version of events, the murder of the Jews of that town was solely a German enterprise. However there is solid documentary evidence that Poles took part in that murder and others.

Concomitantly, there is a trend to present Poles as a nation of victims and rescuers. Of course Poland suffered greatly under the yoke of the Nazis, but Polish suffering did not translate into solidarity with Jews. The arithmetic gymnastics that are employed to extrapolate from the 6,706 Polish Righteous among the Nations and conclude that at least a million Poles were involved in rescue, are just that, gymnastics. It is true that more Righteous among the Nations have been recognized in Poland than any other country, but that is because Poland had by far the largest Jewish community under Nazi domination, and it is not because Poland was a nation of rescuers.

Reading Barbara Engelking’s recently published monograph “Such a Beautiful Sunny Day, Jews Seeking Refuge in the Polish Countryside 1942-1945” (Yad Vashem 2017) alongside Jan Grabowski’s seminal study “Hunt for the Jews, Betrayal and Murder in German-occupied Poland” (Indiana University 2013) demonstrates unequivocally that many ordinary Poles were deeply complicit in the persecution and murder of their Jewish neighbors, and that those who rescued Jews, first and foremost feared denunciation by fellow Poles, usually their neighbors and even family members.

In Hungary, the Prime Minister Viktor Orban and his associates are also busy revising history. So far nothing has come of the museum they had planned to build to eclipse the excellent Holocaust museum on Pava Utca in Budapest that portrays events and processes in a historically accurate fashion, including that Hungarian institutions played a principal role in the persecution and deportation Hungarian Jews. The new museum’s planned narrative would skirt around such “inconvenient” facts, and focus on the suffering of children, ascribing it to “fate.” No less an expression of Orban’s revisionism is the monument that was erected in Budapest to all the victims of the German occupation of Hungary. Hungary was occupied in March 1944 when it tried to get out of the war. Nevertheless it was precisely during the occupation that the Hungarian government fully cooperated in the deportations of the Jews. The monument obscenely equates general suffering under occupation with the Holocaust.

Especially in the Baltic countries, but not only there, the narrative that equates Stalin’s crimes to Hitler’s has established a firm foothold. Undeniably Stalin perpetrated much evil, but when this is equated to the Holocaust, there is an underlying manipulation at play. The subtext is rooted in the canard that Stalin’s crimes were perpetrated primarily by the Jews, since even if not all communists were Jews, all Jews were supposedly communists. So the culpability of local people in the persecution of their Jewish neighbors is cancelled out by the purported crimes committed by the Jews. In the Baltics, as well as other places that were under Communist control, like the Ukraine, anti-communist patriots are often lauded. Many of them, however, like Stepan Bandera in the Ukraine or Herberts Cukurs in Latvia, also engaged in the murder of Jews, and that part is overlooked.

The ongoing battle for memory does not imply that the Holocaust should be placed on a pedestal and never invoked in conjunction with other issues and events, or probed to derive whatever insights we can about our own condition. On the contrary, sometimes aspects of the Holocaust are very germane to the conversation. But they should be invoked with thoughtfulness and with the best historical integrity that can be mustered, without slipping into a new clash in the battle for memory and history.

Dr. Robert Rozett is the Director of the Yad Vashem Libraries, author of “Conscripted Slaves: Hungarian Jewish Forced Laborers on the Eastern Front” (Yad Vashem, 2013), and co-editor with Dr. Iael Nidam Orvieto of “After So Much Pain and Anguish: First Letters after Liberation” (Yad Vashem, 2016).