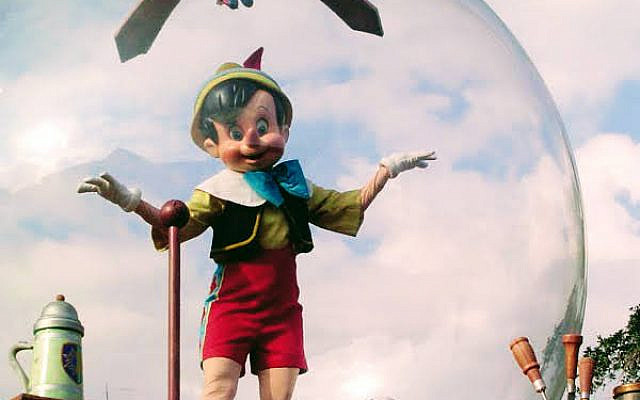 Who is the biggest liar in America today? You’d be hard-pressed not to answer US House Representative George Santos (R-NY). Although some would say, “What a perfect politician he makes!”

From his Bronx Ivy Prep high school at Horace Mann to business college and graduate school at Baruch College and NYU; from his career at Citigroup and Goldman Sachs to his gay marriage; from his mother dying in the 9/11 attacks to losing four employees in the Orlando club shooting; from being Jewish to his mother being a Holocaust survivor—is anything this person says even worth a dime?

While Santos may be a master liar and a giant of a fake, he is really a product of a culture that has become increasingly superficial and phony. For example, at Shabbat Kiddush today in synagogue, one guy was talking about the photos he puts on Facebook of all the good kosher dishes he cooks. I asked jokingly if he also puts up photos of the recipes that don’t come out so good. He said, “Of course not! Everyone on social media only wants to see and hear positive and happy things. If I put up something negative, they would all unfriend me!”

But the lies we face every day aren’t just from our politicians and from social media. Consider the news: this one is biased left, and this one is biased right; it is rare, if ever, to find truly “fair and balanced” news these days. It used to be that everyone had a point of view, but the facts were the facts; now, however, it seems that everyone has an agenda, a hidden motive, or an ax to grind! Whether it’s telling you how to vote, what to buy, or who your friends and enemies are, you can’t be left alone to think critically for yourself anymore.

Around us all are spin masters who are the proverbial “experts” at getting you to think and act the way they want you to. And then there is the “echo chamber” of falsehoods that continuously drives these messages home with repetition from “independent” sources. Not only do we live in a true surveillance society, where privacy is yet another massive lie, but we also live in one where Big Brother from 1984 lives, breathes, records everything you say and do, and manipulates our thinking and actions whether we are aware of it or not.

At one time, exaggerations, biases, distractions, and outright mind benders were thought to be the domain of pickpockets, thieves, and crooks. Then again, it also has a prominent and respected place right in our very own business community in the “legitimate” realm of branding and advertising. If we can get people to believe that this or that product or service makes them young, healthy, smart, strong, or cool, then they will surely buy whatever we are selling. One boss that I had used to call it being a “snake oil salesman,” and with commercials and ads everywhere, you don’t even need a soapbox to stand on anymore.

Yesterday, I went to mail an important letter. I thought about just putting it in an envelope and paying the 63 cents for a stamp, but I said to myself, “This is important, and you want to make sure it gets there,” so I took it over to a local mail and shipping store. When I got there, I gave the clerk and manager my information for mailing these few pages, and they asked me when I needed it to be delivered. I said, “It’s not a super big rush, and it’s the weekend followed by a holiday on Monday anyway, so delivery by Tuesday is fine.” They go to their computer screen, where they are plugging everything in, and they come back and say, “Ok, that will be $60.” I almost keeled over right there and then. I responded, “What! It’s just a simple letter, and it’s not even expedited delivery.” Then they ask me, with their hands on their hips and their heads tilted sideways, “So tell us how much you want to spend?” I respond with what I was expecting, which is around 10 bucks, and say, “Just give me the cheapest you have as long as it has tracking.” Again, they look at their computer screen for the magic answer, and they come back finally and say, “Okay, that will be $12.” Where in the world they got $60 just a couple of minutes earlier, I have no idea, except to say that a sucker is born every minute!

In the end, George Santos is perhaps an excellent “representative” for Congress in that he fits right into the political, news, and business culture that we live in, where lies are the norm and the truth is something to search for like a needle in a haystack. If you can find any, I’d like to sell you the Brooklyn Bridge.