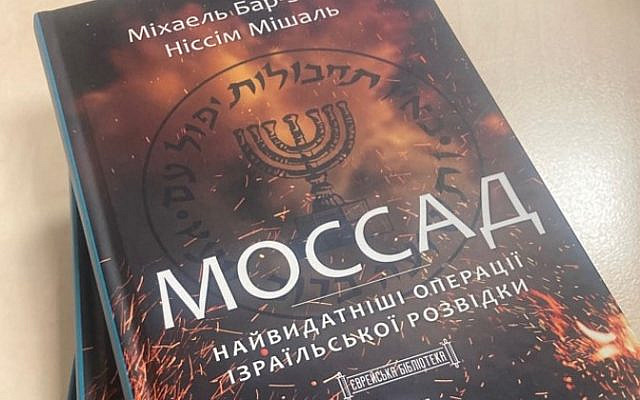 Picture by Jewish Confederation of Ukraine
Good news for book lovers: the third book of the Jewish Library series has been published by “Our Format” publishing house. This time it is about the most secret special service in the world, the name of which in Hebrew simply means an institution.
Although Mossad has been known already for several decades, few people know what the Israeli intelligence service does and how it works. Even the names of the directors of the Institution began to be made public only in 1996, but the details of all special operations are still strictly classified, with the exception of some that had worldwide resonance. It is about them that the book “Mossad: The Greatest Missions of the Israeli Secret Service” tells.
The authors of the book, a well-known Israeli historian and politician Michael Bar-Zohar and one of the most popular TV presenters in Israel, political observer Nissim Mishal, made a lot of efforts to compile a holistic picture of the operations, which back in the day the whole world was talking about, from the leaked fragments of information and conversations with their immediate participants. The stories turned out to be very fascinating.
Like the two previous books published in the Jewish Library, the book about the Mossad is the first publication in Ukrainian of one of the international bestsellers about Israel and Jews. Thanks to the Euro-Asian Jewish Congress and the Foundation of the Family of Yuriy Lutsenko for taking part in this book project.
Work on the next book of the Jewish Library is already underway.