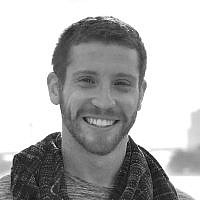 The Blogs
Jacob Kohn
Adventurous & Anxious Gingi
Apply for a Blog
Advertisement
Please note that the posts on The Blogs are contributed by third parties. The opinions, facts and any media content in them are presented solely by the authors, and neither The Times of Israel nor its partners assume any responsibility for them. Please contact us in case of abuse. In case of abuse,
Report this post.

I couldn’t sleep at all last night. Not because I had a midterm today, not because my room isn’t winterized, but because of the violence and deterioration that is occurring in my city. No, I’m not talking about Jerusalem, Damascus, or anywhere nearly relevant to the Middle East. I’m talking about the suburban area’s of St. Louis County. I couldn’t even make believe a scenario in which something as disgusting or violent would happen in the middle of of America, let alone in my town.

Before this whole Michael Brown media disaster left a north county suburb of St.Louis in chaos, Ferguson had a lower rate of crime compared to other county’s of St. Louis. I seldom, if ever, go to the North County of St. Louis. Not because there is a division of people, but because I have no reason to travel to that part of my city, unless I would be flying somewhere out of Lambert International Airport.  To think that Lambert Airport was shutdown because last night was declared “a no fly-zone” over the North County gives me goosebumps, just as when Tel Aviv’s Ben-Gurion International Airport had to shutdown for brief periods because of the threat of rocket fire from Gaza from this past summer’s most recent shed of violence between Israel and Hamas.  I’m thinking to myself, “How is this possible, How can this be happening in St.Louis?” I swear, my city is not that exciting, as the media makes it appear, except for the Cardinals.  But to overhype this case has brought about a frenzy of hysteria to the residents of the Ferguson area, making them believe that they cannot rely on the local authority to ensure their safety or safeguard their rights.

But this can’t be the case. Surely, there is racism and discrimination everywhere in this country, but to claim that this calamity is due to racism in the police authority cannot be the sole reason for what is occurring in my hometown. I think there is a good reason for the destruction of the prior decent county of Ferguson, and it can be mentioned in one word. Extremists. Extremists have hijacked this whole case, claiming there was injustice because a white police officer shot a black boy six times in close range.  You have to step back and examine the whole scenario of what happened to fully understand why an officer would have reason to believe that his life was threatened.  Imagine you heard a report that someone assaulted a local clerk-owner, who makes their only living from their establishment, and is assaulted physically and emotionally because of the threatening behavior that Michael Brown put upon him. If it was two cigarillos, or a candy bar, or the entire cash register, it doesn’t matter what tangible item he stole, because that monetary item can be replaced. What can’t be replaced is the burden and anxiety placed upon this clerk-owner, because now he might be frightened for his life every time he opens his store each day.

I saw some pretty gross things; looting, shooting, arson. Where’s the justice? Where’s the real justice? Why do local residents, who invest in their livelihoods have to be faced with this burden because of intolerance and fanaticism.  A local car dealership that my dad took me to a year ago was looted earlier this summer and the manager of the dealership was assaulted and then robbed.  The death of someone who was supposedly innocent, which has more layers of depth than what’s on the surface, does not give the right to arson and crime.  You can feel bad all you want for Michael Brown’s family because their is discrimination for a certain minority, but apathy does nothing except allow for more destruction.  If people really cared, people would invest in the livelihood of this community, build institutions of education and implement teaching of vocational skills that would help them have a higher standard of living.

I do not claim that all of Ferguson is at fault, I actually believe that it is the outsiders who fuel the community’s fire are to blame because they are riling up people who should be left alone and given the opportunities that each human being deserves. So I’m telling every apathetic sympathizer, STOP! As in the popular arabic phrase, HALAS!, ENOUGH! You’re doing more harm than help, because everyone in this city wants to live and continue with our lives.   That goes for any city in any country.  The media’s obsession is detrimental and goes to show how low media reporting can be relied upon for accurate reporting, unless you were wanting to enjoy a satyrical reporting.  The news today is better at what SNL tries to accomplish.  Where are the reporters with integrity who actually cared about informing the viewers of this country about the accurate truth for their well-being? There are too many News Stations and Periodicals that have jumped upon the sympathizer band wagon and rather distort the reporting to make any group an undergone instead of informing viewers with in-depth reporting and analysis.

But I have hope.  If you don’t have faith or optimistic, then it must be one hell of a hard world to live in.  I also have fear. I fear that my family’s establishment could be the next scene of a violent looting. My dad, aunt, and sister work there, along with the diverse staff and the Jewish and non-Jewish patrons that we serve.  Do people understand that the victims of what is occurring from Ferguson are not the people looting or creating arson to buildings and cars, but it’s the average Joe citizen that hopes to provide for their family and have a good standard of living. Don’t people remember the looting and burning of Jewish stores in Europe during the outbreak of fanatic Nazism?

But fear alone cannot hamper my and others optimism because having faith and being surrounded by others who are optimistic and proactive help build a positive community that can do good for their greater community.

There is also a fire being fueled in Jerusalem.  Now maybe, as humans, we can understand that one conflict does not weigh above one or the other, but the importance is to be able to resolve them as fast as possible and bring prosperity to those communities so peoples lives can be normalized.  I fear that intolerance is hard to combar.  What the average St. Louisite might be experiencing from the chaos and destruction from Ferguson is no different than what Israelis have to deal with from the hands of extremists in Jerusalem.

So my closing words are don’t be so gullible about who is right or wrong, but how can we cooperate and avoid this horrific chaos occurring in each place.  Whether you disagree with the verdict, there is no reason for this behavior.  I’m not a religious man, but God help us.

About the Author
Gayleh (Gay Oleh), once hailing from the middle west and ventured to the Middle East. Avid adventurer, investigator, and passion discoverer. I like to tell stories and embrace the power of story telling to leverage different narratives.
Related Topics
Related Posts
Comments