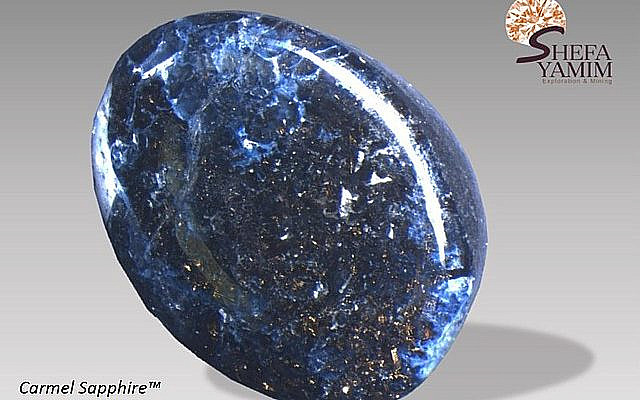 “O afflicted, desolate, and comfortless, behold, I will set thy stones in antimony, and lay thy foundations with sapphires. I will make thy pinnacles of agate, and thy gates of carbuncle, and all thy wall of precious stones.”
-Isaiah 54:11-12.

Israel and prophecy are as closely linked as precious stones are to the bible. The sapphire in particular is a stone with an ancient spiritual significance for Judeo-Christianity. In biblical history this rock is mentioned in several passages. One of them is about Jerusalem and its final prophecy, in which it is said that “it shall be founded on sapphires”. Also, in Exodus 24:10, it is related that “and they saw HIM of Israel; and there was under his feet as it were a pavement of sapphire, as it were a pavement of sapphire, like unto the heaven when it is clear”.

On the subject of jewellery and precious stones, which singularly do not go out of fashion, and we have records of their use and importance even before biblical times, for from very early in the history of our time and humanity, wearing jewellery, stones, handicrafts, etc., represented a distinction of the wearer. Likewise, the use of these accessories was typical of the power castes, not for nothing almost all the kings had crowns or bracelets, necklaces, pectorals and rings.

We have data that gold, as a material of economic, social and cultural importance, begins to have a great relevance since ancient Sumer, which, until today would be the civilisation that precedes the later civilisations of the Middle East-West. Ancient Sumer, well studied by the Azerbaijani-born Israeli-American writer Zecharia Sitchin, who specialised in ancient Sumer, and among it, in the subject of mining, specialising in gold. A mining extraction that we could not consider primitive, because it is very likely that the technology with which the even “sacred”, and of course precious, mineral was extracted had the use of state-of-the-art technology at that time, and even comparable to what we know today.

Queen Puabi of Sumer, found by the British archaeologist Leonard Woolley, considered the first modern archaeologist and father of the discipline. Woolley found and excavated the ancient Sumerian city of Ur, which is in fact the city of origin of the patriarch Abraham. He also found geological evidence of the Gilgamesh Flood, which bears a strong resemblance to the story of Noah in the Hebrew bible, and which is also the oldest epic work of our civilisation. The Epic of Gilgamesh or the Poem of Gilgamesh dating from 2500-2000 BC, and even much earlier, is an invaluable record of humanity as we know it.

The subject of precious stones, gold and silver work and jewellery is quite impressive. So much so, like the “Carmel Sapphire”, an extraterrestrial mineral, composed of titanium, aluminium and zirconium. Found in 2019 by Avi Taub Z”L (“Zichronó LiBerachah”, Hebrew for “blessed memory”) for his company Shefa Gems. In fact, Mr. Taub said: “In today’s world, where the prices of precious stones are determined primarily by their rarity, the Carmel sapphire is a unique discovery because it has not been found anywhere else in the world”.

Could it be that it is the Carmel Sapphire, the original stone referred to in the bible in relation to the Supreme One of Israel? And, according to that, would there also be a connection with the messianic prophecy of Judaism? Maybe so, but for now it is only known that this new precious stone, named after the Carmel mountain, which manifests itself in the north of Israel, is a true preciousness and has a clear spiritual power. Indeed, Mr. Taub is remembered as being very observant of Judaism and close to Chabad Lubavitch, as was his family.

In fact, it was the great Lubavitch Rebbe, Menachem Mendel Schneerson Z “L, who had a prophetic vision that revealed to him that: “In Haifa there is a sea. One should not be intimidated by something that is profound. The uniqueness of Haifa is that it has a sea, and it has a valley, and in the valley there are precious stones and gems. The Holy One, blessed be He, did a wonderful thing; He hid them in the depths of the earth, and in any case, in the depths of the ploughed field”.With these words full of mysticism, the Rebbe conveyed the good news to the mayor of Haifa, who surely did not expect it, and they also reached the ears of Mr. Taub, who undertook the journey to find these gems, which indeed did exist and were in the north of Israel, the only place to this day where there is mining and, above all, the only place in the world where the “Sapphire of Carmel” is found.

The Rebbe was a phenomenal man, and his legacy lives on. Likewise, the company that discovered the Carmel Sapphire, which, in turn, mines diamonds, rubies, regular sapphires and garnets, created a fine jewellery brand, under the name Holy Gems, which has been manufacturing over time, unparalleled jewellery with the precious stones they possess, among them, the Carmel Sapphire.

Well, to own these jewels, and to be able to have in your possession a Carmel Sapphire, which even has a higher level of hardness than diamond. It is indeed quite special and significant, understanding its spiritual power, which is also not of this world. Holy Gems is a unique company in its field and is an important standard bearer for Israeli jewellery internationally.

Holy Gems has its sales centre in Akko (Acre), with a new and modern showroom for the jewellery. It was recently launched, attended by several personalities from the press, show business and national life. In addition, the brand will soon open a shop in Jerusalem for national and international lovers of high jewellery with an Israeli stamp.

About the Author
Political scientist, international analyst, researcher, journalist and columnist in various media in Latin America, Spain and Israel. Historical researcher and presenter of "Los pasos de Sefarad en el Nuevo Mundo", a radio programme on Radio Sefarad about the Sephardic heritage in America. He is also a lecturer on many subjects, such as history, literature, Judaism, historical figures, important women in history and mysticism.
Related Topics
Related Posts
David Rosenthal