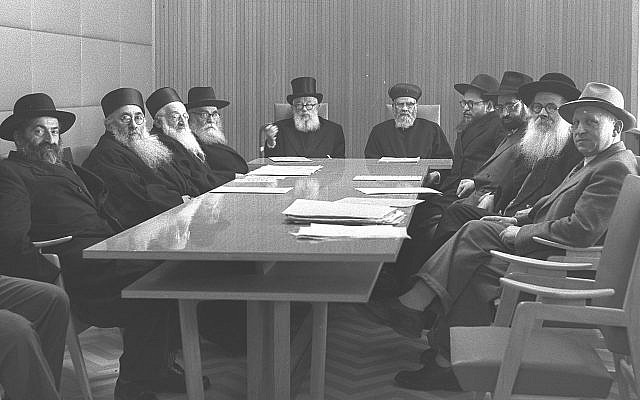 The Chief Rabbis in holier times

Israel has two chief rabbis, competing with each other who can show the public best that they are redundant clowns. (They hold up the pretense of being Charedic but no Chareidic Jews follow them either.) And now, one of the comic duo has spoken again. He’s now Chief Rabbi of Jerusalem. Same shtick.

When they’d talk Judaism, I’ll at best respectfully disagree. But when they talk to or about Israeli society, their opinion has the value of any politician’s vision. Either, commanding respect or asking for merciless opposition.

The stoning of an Arab car on the West Bank, allegedly by Jews, resulting in the death of one woman, prompted him reportedly to condemn this. That’s beautiful, though much too late. But now, let’s look at his reasoning.

In short, he implies that stones kill and the public should not take upon themselves the grave duty to kill as we have a government and army to discharge the terrible responsibility of restraining and killing those that should be.

But why does he imply falsely that the victim should have been killed but not by taking the law into our own hands?

Why doesn’t he condemn any attempt to kill innocent Arabs Gentiles?

Why doesn’t he express his sorrow over the death of the woman killed?

Why doesn’t he call upon the religious Jewish public to intensify the learning about the sanctity of all human life?

Why doesn’t he point out that murder and soiling the name of Jews and subsequently G^d are the very worst sins in Judaism?

Why does he continue to make Judaism sound immoral, archaic and irrelevant to the wider public that pays his salary?