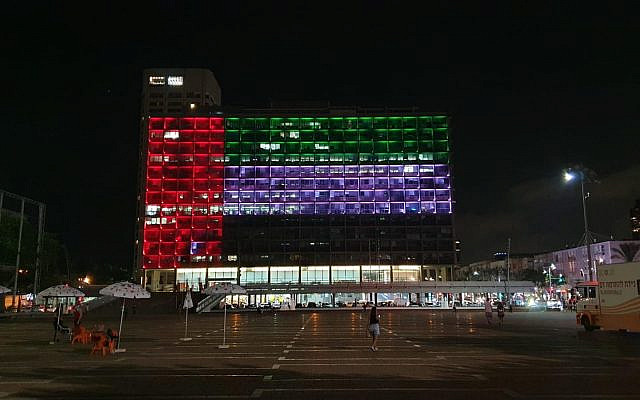 U.S. President Donald Trump brokered the peace deal, coming just 82 days before the next American presidential election. It’s a significant foreign policy achievement for Trump, and a milestone for Netanyahu who is the longest serving prime minister in Israel’s history. For bin Zayed it is a bold and brave move that guarantees Israeli security, intelligence, and protection for the UAE, which is a country just on the other size of the straits of Hormuz from Iran.

Though security, diplomacy, and business ties between Israel, the UAE, and other Gulf States have been developing over the past 20 years, great sensitivity has been encouraged, leading to measures that have kept relationships quiet and under the radar. One reason was the assumption that peace between Israel and these Arab states could only come after progress between Israel and the Palestinians. But, when Trump’s peace “deal of the century” was unveiled, the Palestinians refused to accept it, causing a stalemate and an inability for Israel to move forward.

In July 2020, Netanyahu was expected to advance a part of Trump’s peace plan, unilaterally, by applying sovereignty in up to 30% of the West Bank (Judea and Samaria) and the Jordan Valley. After threats from the Palestinians and Jordan, and an uproar in Arab nations about the possibility of what was considered “annexation” of Arab lands, Netanyahu decided not to follow through. The Trump Administration was also not keen on Israel implementing only a section of the peace plan. Behind the scenes, Israel was then looking how to advance diplomacy while postponing the issue of sovereignty. What resulted was bin Zayed entering into a peace deal with Netanyahu, while saving face with the Palestinians by appearing to be the hero that saved Palestinian land from Israeli “annexation.”

Middle East analyst, Eytan Gilboa, Professor and Director of the Center for International Communication at Bar-Ilan University explains: “Netanyahu feels that he is at the end of his term. So, he wants to leave some kind of legacy. He thought it would be the annexation. He couldn’t do it. He probably told himself if I cannot annex, maybe I should have a different legacy.”

Both Netanyahu and the U.S. Trump Administration say that Israel will eventually be able to take sovereignty action as expressed in the comprehensive peace deal with the Palestinians. Netanyahu’s critics claim it won’t happen, and that he missed an opportunity, failing in his promises to his supporters. Others claim that what he gained was unprecedented future peace deals with several Arab nations.

The main problem is Iran, according to Gilboa. “The Gulf States are prone to Iranian threats and manipulations. So, they have been cooperating with Israel against Iran.”

There is intelligence sharing and security activities going on between Israel and the Gulf States. On Thursday night, Netanyahu called Mossad Director Yossi Cohen and thanked him for the assistance of the Mossad in developing the ties with the Gulf States over the years, which Netanyahu said assisted in bringing the peace treaty to fruition. While most analysts and businessmen are not willing to discuss any of the intelligence and security issues, one did admit that there has been dealings with Iran, as well as actions against Iranian agents in the Middle East; those who would like to undermine governments. This alliance of Israel and the Gulf States only serves to strengthen its deterrence activities vis-a-vis Iran.

Meanwhile, the UAE is aspiring to become more moderate, technological, and innovative. Also, more influential in the Arab world. Israel is a start-up nation, with valuable resources and brainpower, and with a record of breakthroughs in many areas.

Gilboa acknowledges, “The UAE has a lot of money. We have a lot of manpower. This is a good combination. This is the opportunity that we talk about. So, a combination of threats and opportunities has led to this agreement. It’s a message to Iran that the Arab Gulf countries will cooperate with Israel if Iran continues threats, violence, terrorism, military interventions, and their nuclear weapons program.”

As embassies open in both countries, trade relations are expected to advance, as well as tourism.

Adam Swidan, an Israeli Arab businessman and consultant, with links to Gulf nations, says that in light of the global pandemic, peace and dialogue is important for everyone. “You can’t deal with global issues like corona unless you can speak with your neighbors. There are many issues not only for Israel but for these Gulf countries.”

While Swidan deals with UAE officials on a business level, years ago he heard that they were talking about open diplomatic relations with Israel. He says Israel can provide answers for Gulf nations in the areas of high tech, cyber security, and agriculture; as well as environmental, energy and water issues. He also stressed the value of travel between Israel and the Gulf nations. “If there will be a direct flight that will be absolutely huge for business. It is not far to Bahrain, for example. A couple of hours. You can go in the same day and come back.”

Gilboa believes there will be more investment from Abu Dhabi, leading to more prestige for the small Gulf State. Maybe, the UAE could become a mediator between Israel and the Palestinians. “These countries are aspiring to increase their image in the region, and the western world, in particular.”

Plans are being made for a diplomatic ceremony at the White House so that Trump can make the best of this opportunity to show himself as a peacemaker in the Middle East, just before Americans go to the polls in November. In Israel, Netanyahu will be able to ride on good will and popularity, as he sees himself responsible for changing the “land for peace” deal into a “peace for peace” deal. This translates into Israel negotiating with Arab countries from a place of strength rather than weakness. Bin Zayed will be seen as the architect of new reform policies in the Middle East, forging ahead with the UAE becoming a hub for cultural and business projects.

The “circle of peace” that Netanyahu referred to in his Thursday night press conference will include other Arab nations, most likely, Bahrain, Oman and perhaps, Sudan. He sees the normalization of diplomatic ties with the UAE as just the beginning of a transformed region.

Jared Kushner, Trump’s son-in-law and peace advisor to the Middle East, called this peace deal an “icebreaker” where Israel can now normalize ties with other countries in the region. Kushner and U.S. leaders hope it will inspire a lot of people to see the potential in the Middle East. In a media conference call he said, “It shows people in the region that they do not have to be captive to old conflicts and old thinking. They can think about new ideas and new exciting paradigms. With a little bit of courage, and a little bit of creativity, and good leaders, then anything is possible.”

In this time of economic uncertainty due to the coronavirus pandemic affecting the global community, it does give people renewed hope for the future. And, currently, that future looks bright for Israel, the UAE, and other Gulf countries in the Middle East.