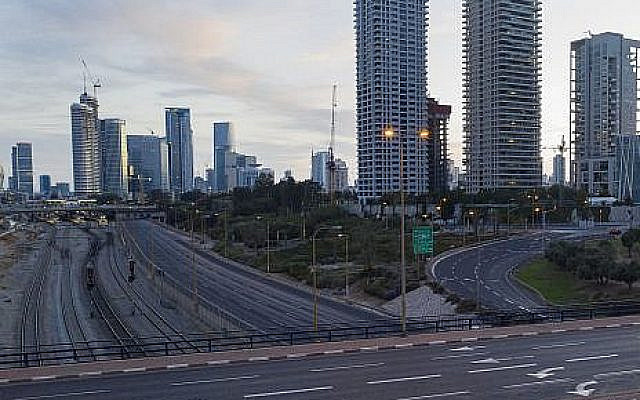 The Netanyahu government has made Israel the only country to declare a second lockdown and unless pressure is applied it may go on for quite a while. This is an unnecessarily radical move that amounts to another calamity the secular majority must endure to preserve the alliance the country’s top criminal defendant has forged with the Haredim.

Something must indeed be done about the situation in which Israel is at or near the top of the world in new COVID-19 cases per capita, which in recent days passed 300 per million. That’s more than double the figures you see in the United States, another coronavirus basket case. And it is the data point that those who want to scare you into supporting a total lockdown cite.  Indeed something must be done – but not a total lockdown. Here’s why.

The distribution of cases around the country has consistently not been equal, and the patterns are clear and steady. The most heavily hit municipalities, the so-called “red cities” which account for most cases, are almost all Arab and Haredi, plus areas of Jerusalem with high concentrations of both groups. From Jaljulia to Taibe, from Beitar Illit to Bnei Brak, Emanuel and Elad, they’re all there. There are objective reasons for this including the prayers and crowded conditions.

This fact attaches strongly to the next interesting data point: when it comes to the deaths per capita, Israel is nowhere near the world leaders. Israel has in recent weeks been averaging around 15 deaths per day which is about 1.5 per million and quite terrible. But the US average is around 1,000, which is double the rate relative to population, and more than four times out of kilter with the new cases.

Even with the recent week’s uptick, Israel is only in 40th place in the world in deaths per capita, behind almost all major Western nations. And accurate counts in developing countries would almost certainly push it much further down the list. This is the data point that those who want to scare you into supporting a total lockdown do not tend to cite.

The discrepancy occurs because so many of Israel’s new cases are among the less vulnerable young, reflecting the youthful demographic profile of the Arab and Haredi sectors.

Not that Israel’s situation is good; Western Europe has brought its pandemic under control with the number of new deaths in some countries like Germany near zero. Israel must improve its performance, because the virus is dangerous and an unchecked spread would overwhelm hospitals and cause the death rate to skyrocket as well.

But there should be no countrywide lockdown and no lockdown in the metropolis around Tel Aviv, which is the engine of the economy. With the aforementioned exception of Bnei Brak, all of its municipalities, from Ramat Gan to Herzliya, Givatayim and Tel Aviv itself, not one is “red” – and some are marked “green” for being virtually corona-free. This, despite all the hand-wringing over bars in Tel Aviv having reopened early on. Although numbers have of late risen all over, none of the main cities, including Haifa, Beersheba, Ashdod and Eilat are red.

Here is my suggestion: lock down red cities and those with an infection rate that can be agreed upon as dangerous (or which don’t meet testing quotas). Enforce the existing guidelines for real everywhere else. Spend millions dramatically and immediately beefing up corona wards and adding doctors so that “collapsing hospitals” would not become the reason to squander billions on an economically debilitating quarantine. This would be a balanced and science-based policy that addresses the spread of the virus, understands that lockdowns have health costs as well, and allows safer areas to continue social and economic activity.

Clearly it would be logical to at least try this first, but logic has never been the factor driving Israel’s corona policy.

Israel’s first and unusually severe lockdown was widely perceived to have been a machination by Netanyahu to delay his trial – the courts were among the first things he impeded – so he could buy time and maneuver to stay in power. He was lucky to have a rival as credulous as Benny Gantz, who controlled a Knesset majority for a time and actually handed the premiership to Netanyahu out of respect for the coronavirus.

If Israel acted logically now, Netanyahu would face the wrath of the Haredim, many of whom can be expected to proceed with mass prayers and huge weddings even during a lockdown, daring the hated state authorities to do anything about it. And Netanyahu’s ability to stay in power depends totally on the Haredim: there is no realistic scenario and has never been an election outcome of a Likud majority without Haredi parties.

It is as simple as that. The heavily subsidized Haredi sector, where participation in the workforce is low, and which receives massive state funds for schools that refuse to teach science or English, is forcing a total lockdown in the name of “fairness.” Thus will unemployment and misery grow in secular Israel, which has for decades been squeezed dry to fund the Haredim and the Likud’s other pet sector, the Jewish settlers busily usurping the West Bank and turning the country into a non-democratic binational state.

For Netanyahu, total lockdown is doubtless also appealing as a means of suppressing the weekend demonstrations protesting his corruption scandals, which have become large enough to be embarrassing. Or rather, they would be embarrassing to a normal political leader;  Netanyahu, who is on trial for bribery, fraud and breach of trust, is doubling down. In recent days he has only stepped up his agitation against the legal system and demands for an investigation of his investigators on hysterically exaggerated procedural pretexts.

As a special bonus, Netanyahu can probably also assume that many people in his wound-up base would approve of needless punishment meted out to the “elites” in Tel Aviv, even if the result is a crippling economic crisis.

One wonders how long society and the political system can put up with this insanity. It may be a long time: the organs of state are not well-structured to fend off such Satanic populist attack, the Likud Party itself is now essentially a mafia without a molecule of shame, and Netanyahu’s opponents tend to be law-abiding.

And it’s good to be law-abiding. But I am not certain that all of them will abide by another lockdown under these circumstances, when faith in the government requires an unrealistic concentration of stupidity. If the government votes for a total lockdown this week the earth should shake under its metaphorical feet. And if it does not relent, lockdown mutinies would come as no surprise.

The center-left all over the world are often a collection of saps, but there could nonetheless be a limit.